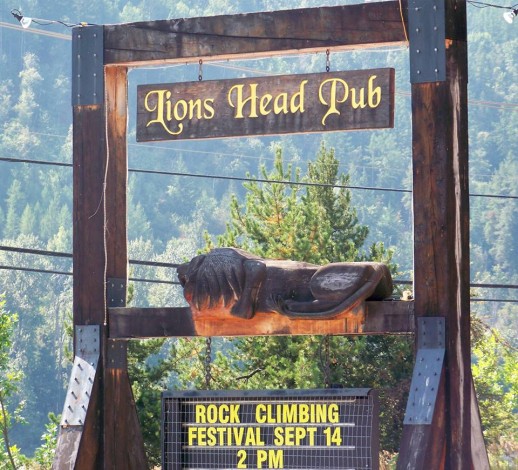 With great hesitation I packed the kids for the second annual Kootenay Rock Climbing Festival. We often went to our local crag and would run into 20-something-year-olds. With their sneers and heavy sighs they would quickly say hi and start pulling their ropes, not interested in sharing the day as our babysitters, they would move onto another climbing spot. I don’t blame them. Kids are noisy and needy, and having Mom and Dad on the rock seems to make it ten-fold. We were told this would be a “kid-friendly” event, so we headed out to Lion’s Head Pub in Robson/Castlegar.
If you haven’t been, there is a bluff behind the bar that the owners allow climbers access. Climbing and beer at the same venue, it’s perfect. Plus, this festival’s outdoor events included top-roping the routes on the wall behind the pub (which range from 5.9 to 5.10d,) two slacklines (one was a 2-inch Gibbons trick-line and the other a 50-metre long-line,) and the ever-popular milk-crate stacking challenge called “the tower of power.” The zip-line was my three-year-old son’s favourite and my nine-year-old daughter was on the wall before I could get my harness on to belay her. The woman at the end of my little girls rope promised me she was fine and her partner could give me a belay if I needed one. I was in climbers heaven!
The ratio of kids to adults was about nearly equal, with an overall crowd of close to 200. Such a high number of kids playing meant it was even more important to have everyone act as role-models. Safety was a number one concern at all times, with bins of extra kid harnesses and helmets. An extra table of goodies and snacks was put out just for the kids. Even a port-a-potty was brought in just for the youth (no kids in the bar.)
After a bit of climbing, I purchased raffled tickets and was blown away by the silent auction. The local businesses donated prizes that included harnesses, helmets, quickdraws, tee shirts and guiding services. The raffle prizes were great, including a DaKine backpack, chalkbags, nuts and more. Together we were able to generate of over $1,200. Proceeds of the event will go towards reimbursing new route development in the Kootenay region and crag clean-up and maintenance.
When the sun set, the adults retired to the bar where a private room was booked to hang-out, eat and enjoy a presentation by Kootenay local, Gord McArthur, about his “road to the 2014 Olympics.” Gord will be representing Canada at the Winter Olympics in Sochi, Russia, this coming Spring for the demonstration sport of mixed climbing. During his 45-minute presentation he discussed his beginnings as a rock climber, meeting ice climbing legend Will Gadd, trying mixed climbing for the first time and getting into competitive climbing.
It is an honour to a part of a group of climbers that respects the generational quality of climbing and understand that it takes a community to keep climbing accessible, safe, and motivating. On our way home, my daughter said, “ Will we climb with all those people again? I don’t think I’ve ever had so much fun climbing.” With a smile I said, “Next year, my Dear, next year.”