Earlier this month, we shared the news that there was a movement to protect Mount Waddington and the surrounding peaks and glaciers. After we published the piece, legendary B.C. climber Don Serl, who wrote The Waddington Guide in 2003, reached out to us. In 2017, Serl received the Summit of Excellence Award from the Banff Mountain Festival for his many contributions to the sport of climbing in Canada. 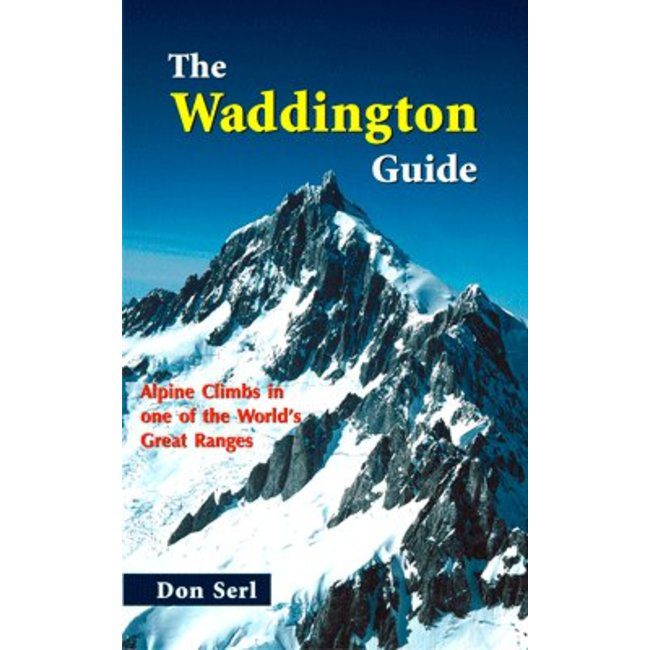 Waddington is the highest peak entirely within B.C.’s borders at 4,019 metres, although the taller Mounts Fairweather and Quincy Adams share the border of B.C. and Alaska. The Waddington Range stands at the heart of the Pacific Ranges, a remote and extremely rugged set of mountains and valleys. Access is difficult and finding good skiing and climbing conditions can be challenging.

In the story about the push to protect Waddington, we noted that longtime B.C. climber John Baldwin had written a letter to John Horgan, the premier of British Columbia, asking two things: to deny any current tenure applications in the area and designate the areas of the Waddington/Whitemantle Ranges and Homathko Icefield as non-motorized areas; and to give them protected status.

In July 1985, Serl made a five-day traverse from Waddington across Combatant, Tiedemann, Asperity and the jagged crest of the five Serra peaks with Peter Croft and Greg Foweraker. It was a historically important climb and the first traverse of the range. In Chic Scott’s book about Canadian climbing called Pushing the Limits, Serl is quoted as saying, “I had been frightened of what might happen if you get out on top of the ridges of Tiedemann or Asperity or Serra Four or Five and the weather goes really bad. You’re traveling pretty light, and it’s 5,000 feet down on either side to the glaciers to get off… and technical terrain all the way.”

Below are Serl’s thoughts on the proposed park, his comments to the Federation of Mountain Clubs of B.C. and a link to a petition called Keep Waddington Free.

The following is from Don Serl about keeping Waddington free

Recently, you published a news piece covering John Baldwin’s proposal to turn a large portion of the Coast Mountains, including the Waddington Range, into a non-motorized recreation zone, with an eventual goal of parks status. This seems laudable, and most keen outdoors people reflexively say ‘yes’ to proposals that appear to ‘protect’ their interests. I however believe exactly the opposite is true. The Waddington Range is especially precious in large part because there are NO rules. There is NO restriction on access. There is NO bureaucracy. There is just you and your friends and the mountains! Such purity and such freedom are rare, and once it is gone, freedom is seldom restored. ‘Protection’ will mean restriction, and restriction, in whatever guise, ought to be resisted.

I would like you to publish ‘the other side.’ The ‘threat’ that one current specific heli-skiing tenure application poses to the Waddington Range is minimal, and almost certainly easily negotiated to a mutually satisfactory arrangement. This has been done before. Other ‘threats’ are illusory, and/or excuses for elitist attitudes towards the place of mountaineers and ski-mountaineers in the pantheon of outdoor recreationists. Why should a person who wants to fly into the Range for a week or two, or perhaps just a weekend, have that privilege if it not also granted to the person who wants to fly in for an hour? Why?

I have great respect for John Baldwin, personally and insofar as his activities in the Coast Mountains go. He is a leader, and has ‘shown the way’ to many wilderness adventurers. I reckon he has missed the mark badly on this proposal though. He is aware of my objections, but he correctly thinks that neither of us are likely to change the other’s mind.

I append a comment that I have just submitted to the Federation of Mtn Clubs of BC website. I’d appreciate it if you could publish some or all of the piece, and/or the comments above.

One of the crowning glories of the Waddington Range, which it shares with much of the Coast Mountains, is its utter freedom. You go where you want, when you want, with whom you want, to climb whatever you want. The imposition of any level of bureaucracy onto the area would destroy that freedom. And once freedom is lost, it is almost never restored. So, while I fully agree that heliskiing operations make poor neighbours for ski touring parties, I urge the FMCBC and its members to restrict their proposal to that specific issue, and that alone.

The ACC proposal from 1989 would have restricted air access to only a few sites. The FMCBC Rec and Con committee response to the heliskiing tenure application in 2007-8-9 would have banned aerial daytrips into the Range, year round.

Why? There is no conflict to a couple celebrating their anniversary by heli-picknicing with a bottle of champagne in the Waddington Combatant Col (which has happened; and kudos to them for their boldness), if you happen to be on the Bravo Glacier route the same day. There is no reason to ban extreme skiers from Whistler from flying in to challenge themselves with big, steep, dangerous descents – which happens rarely, but which I’m sure is as big news in their community as a new face being climbed is big news in ours.

Such restrictions, if applied to the whole area proposed by John Baldwin, would have prevented Phyllis Munday, late in her life, from enjoying a lunch in the middle of the Homathko Icefields before doing a flight-seeing trip around Waddington. Such restrictions should be anathema to any ambitious mountaineer, not to mention any fair-minded user of the outdoors. Who are we to value ‘our’ activities so highly that we would restrict others from their enjoyment.

Who are we so say that it’s OK for me to fly into this great range for two weeks, or a week, or a weekend, but that you, my friend, cannot do so because you want to do so only for one day, or a couple hours. That is indefensibly parochial and selfish. And to think that a park, whether provincial or national, would serve only, or even chiefly, the interests of its principle current users, i.e., mountaineers and ski-mountaineers, (in other words, us), is naive in the extreme.

Land managers, of whatever stripe, manage land. They have their own priorities, their own interests, and their own perspectives. Management always means rules, and rules change, over time, and are subject to political whim and economic currents. The only rule which protects the current wonderful ‘freedom of the hills’ in the Waddington Range is no rule at all!

So, think again, all of you who reflexively say ‘yes’ to what seems like a reasonable means of protecting a very special, highly unique environment. If we wish to continue to enjoy our recreation to its fullest extent, any and all proposals which restrict that ability ought to be resisted with all the energy we can muster.

If you care enough, take the extra step and send a brief message directly to the people who make the decisions. Tell them you want heli-skiing excluded from the Waddington Range and its neighbouring slopes, but that you support other forms of recreational access, without restrictions, including all forms of air access, in any place, at any time, for any duration.

Mention your concerns that ‘protective’ land designations of any sort almost certainly will lead to access restrictions, not consistent with the above position. Say something nice about the Range, the adventures that it offers, and the freedom to be experienced within its boundaries. Future generations will thank you.

Those decision makers include: