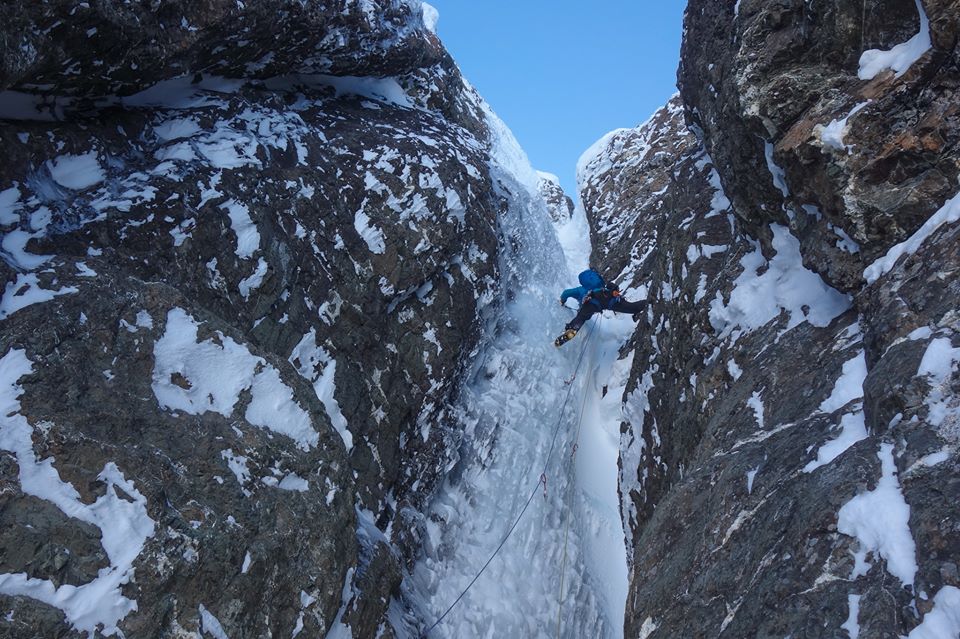 It’s been a snowy and cold year on Canada’s West Coast with unclimbed ice forming on many faces.

“After a 10-hour slog up the northwest ridge trail we camped on the ridge high point at 1,730 metres overlooking the Elk Valley,” Lee said on the Facebook group for Vancouver Island Climbing.

“In the morning we traversed over and had a look at the northeast face, which looks like it belongs in the Cordillera Blanca right now.

“Unfortunately there was a constant flow of spin drift coming down the sun affected face- with that we aimed for the safety of the north face and picked a line that had a promising start and directissima aim for the summit.”

After six pitches of climbing with difficulties to WI4 and M3, they found themselves on the summit shortly before dusk.

They descended the northwest ridge in the dark down five rappels and were back at camp 15 hours after leaving. They named their new route Threading the Needle.

After 5 pitches of ice and mixed climbing up the northface of Elkhorn Mountain we were delighted to curl around the west side and see the sun before it set for the day. From here we had one more pitch of easy climbing and a short 20 meter scramble to the summit. As far as climbing goes, it doesn’t get any better than this. #adventureculture#outdoorslife#daysyouremember#meetthemoment#explorebeyondtheusual#mountaincultureelevated#mountaineering#peaks#liveclimbrepeat#mountainculture#alpineclimbing#alpineview#islandalpine#elkhorn#elkhornmountain#getoutandplay#vancouverislandalpine#vanisle#explorevanisle#explorevancouverisland#explorevi#vancouverisland#mountainsfordays#sharevi#vancouverislandclimbingandmountaineering#vancouverislandclimbing#strathconapark