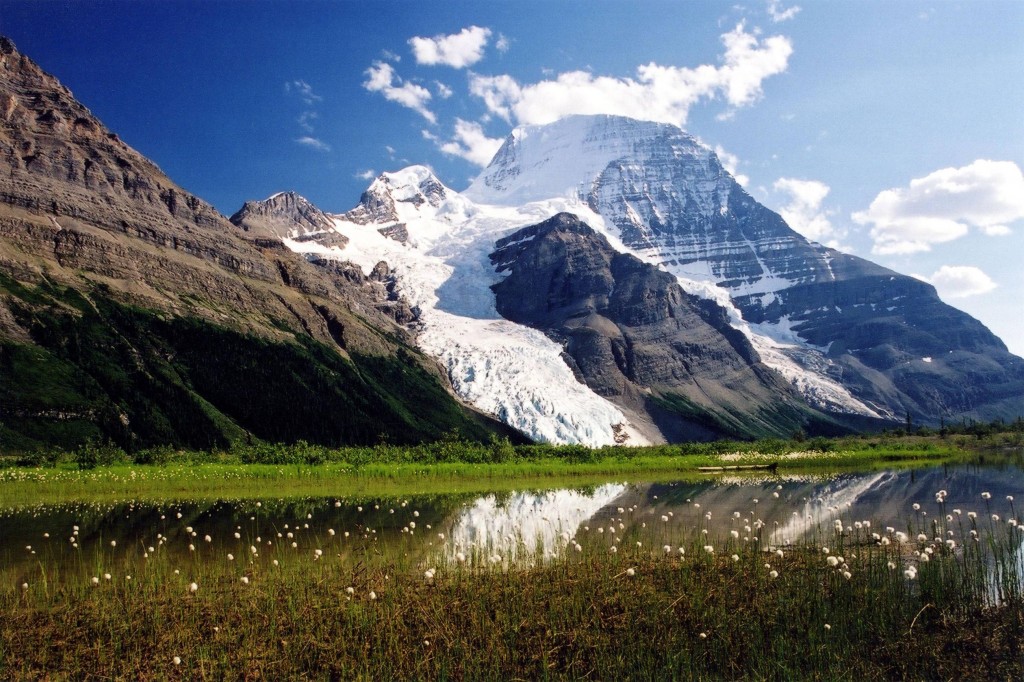 “Oh what a glorious sight he was that day we first saw him. There, buttressed across the whole valley and more, with his high flung crest mantled with a thousand ages of snow, Mount Robson shouldered his way into the eternal solitudes thousands of feet higher than the surrounding mountains.” This was George Kinney’s reaction in 1907 to his first view of the mountain that entranced him and was the focus of his life for the next four years.

Kinney was born in New Brunswick, had investigated the fossil beds on Mount Stephen and completed a solo ascent of that high mountain in October of 1904. A founding member of the Alpine Club of Canada, Kinney joined Arthur and Quincy Coleman on what was the first expedition to attempt to climb the highest mountain in the Canadian Rockies.

Arthur Coleman had spent several years searching for the legendary Mount Brown and Mount Hooker which had been touted have elevations of about 5000 metres only to find that a “mistake” had been made.

Kinney and the Colemans returned again in 1908 and after two attempts were abandoned in bad weather, Kinney set out on a solo attempt on September 9, ovenighting in bad weather and reaching an elevation of 3200 metres before avalanches drove him off the mountain. The following day the trio reached 3500 metres in fine weather before retreating.

The Colemans and Kinney made arrangements to continue their efforts the following year. However following reports that a “foreign” party (Arnold Mumm, Geoffrey Hastings, Leopold Amery, and Moritz Inderbinen) had eyes on the peak, Kinney set out earlier in the season than planned, alone, “hoping to pick up someone on the trail to share fortune with me.”

The Athabasca River had reached very high levels and both Curly Phillips and George Kinney had been marooned on islands for a few days before their chance meeting at John Moberly’s cabin above Jasper Lake on July 11th. Curly Phillips had also entered the mountains by himself, hoping to start an outfitting business. Even though Phillips had never climbed a mountain, Kinney thought the, “blue-eyed, curly headed clean-lived Canadian” was, “perfectly fit for the undertaking I had in hand.” Fourteen days later they reached the base of Mount Robson. Twenty days of bad weather greeted them although they made three attempts, spending one night on the mountain at 3050 metres.

Finally, with their provisions nearly depleted, a clear day dawned. This would be George Kinney’s twelfth attempt. After overnighting again on the mountain, they may have believed that they reached the summit ridge, now known as Emperor Ridge, on August 13 in dense clouds, cold, and high winds. The ascent was a tremendous effort over steep rock, ice, and snow. Curly Phillips had no prior mountaineering experience and did not even have an ice axe, using instead a stout pole from the forest below.

In 1913 a team of experienced climbers organized by the Alpine Club of Canada journeyed to the peak under very different circumstances than those endured by George Kinney during his attempts. The group was able to travel to the base of the peak by railway and then to their base camp at Berg Lake beneath the mountain’s northern cliffs by pack train under the guidance of Curly Phillips himself. Conrad Kain, an Austrian guide who had a well-established reputation with the Alpine Club, was to lead two experienced mountaineers, Albert MacCarthy and William Foster. The route Kain had chosen was on the northeast side of the mountain and was quite different to that climbed by Kinney and Phillips in that most of it was on ice. According to the club’s official records, “Thirteen hours of strenuous fighting up rock cliffs and dangerous slopes of snow and ice, where sixteen hundred steps had to be cut with the ice axe, brought them to the summit at 5 o’clock in the evening.” Kain later wrote that, “Mount Robson is one of the most beautiful mountains in the Rockies and certainly the most difficult one.”