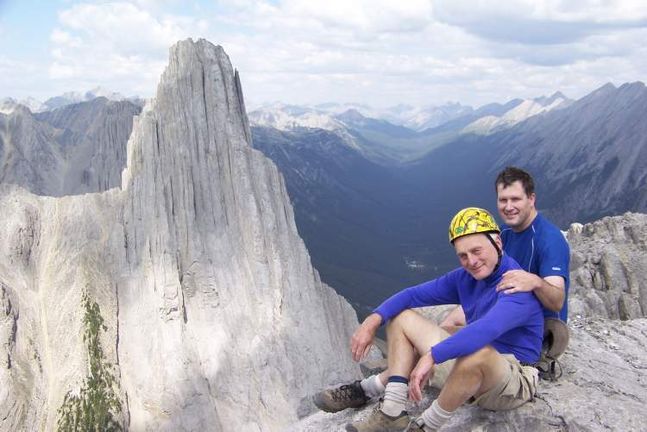 A Winnipeg climber who was among the first to scale Manitoba’s namesake mountain has died in an accident in Banff National Park. Peter Aitchison, a retired University of Manitoba math professor died Wednesday after a 150m-fall on Mount Victoria. He was 71.

“He was passionate about sharing the outdoors with anyone who wanted to share an adventure with him,” said his son and fellow climber Jeff Aitchison. “He was highly respected as an outdoorsman, and tough as nails.”

He was known for setting out at the crack of dawn, which is what he did Wednesday morning while on an annual climbing expedition organized through the Manitoba chapter of the Alpine Club. Parks Canada said Aitchison and a partner were climbing the south summit of Mount Victoria near Lake Louise when he slipped. Jeff Aitchison said his dad was apparently doing a relatively easy scramble up a slope when he slipped on some loose rock, falling backwards. He hit his head during the fall, cracking his helmet.

“Peter was one of my greatest mentors,” said Simon Statkewich, president of the local Alpine Club and part of the trip to the Rockies. “He was always generous and giving of his time and talent.”

Though he climbed everywhere — Australia, Colorado, the Whiteshell — Aitchison might be best-known for leading the first ascent of Mount Manitoba, 3400m, in the Yukon. Aitchison revived the Manitoba chapter of the Alpine Club in the 1980s. He had a deep and philosophical connection with the mountains.

“That’s life, isn’t it,” he said in 1993 before setting out to climb Mount Atlantic in southwest Yukon. “We think the challenge and satisfaction you get from doing this is worth the risks.”

“The thoughts of the rescue team and all Parks Canada personnel are with the victim’s family and friends,” said Parks Canada spokesperson Omar McDadi in a release. “We extend our most sincere condolences.”