Steve Tersmette and Matt Honeyman have made the first ascent of the east face of Mount Aeneas at 5.9 over seven pitches in 375 metres. A month later, John Mellis returned with Tersmette and bolted anchors.

The route follows a very large, obvious crack the splits the center of the lower east face for the first three pitches on solid, clean limestone with textured holds and features with good pro. The upper four pitches climb in the wide chimney to the prominent notch between to small summits.

I've been eyeing up this line for 4 years ever since I started exploring and climbing in this little known area in the West Rockies. @matthewkirk9053 were blessed with a beautiful day, great rocked and an abundance of protection as we grabbed a first ascent of a line that was simply begging to be climbed. "A Firm Specimen " 7p, 5.9, 375m July 11, 2020 Steve Tersmette and Matt Honeyman . . . . . . . . . . . . #alpineclimbing #alpineclubofcanada #greengreywhite #mountainlife #mountainculture #mountaincultureelevated #canadianrockies #rockymountains #eastkootenays #kootenaylife #kootenays #kootrocks #kootenayviews #rockclimbing #climbing #basinlife #powderhighway #mec #goodtimesoutside #grippedmagazine @grippedmagazine @crowfootmedia @kootrocks @kootenayviews @alpineclubcan @mec

Directions: To get there head to Pedley Pass Recreation Trail here.
Approach: From the signed trailhead, follow a well-used trail that climbs steadily for 1 km before leveling off at Bumpy Meadows. At the west end of Bumpy Meadows the trail climbs a second time to Pedley Pass (2 km from trailhead). At the junction, stay right on the trail that descends to a small tarn in a basin below Mount Aeneas. Just before the tarn, the large East Face towers above to the left. Pick up a faint boot-beaten trail that skirts the base of the face. Scramble up scree, talus and limestones slabs to the base of the route marked by a small cairn (snow in early season). Approach 1.5hr to base of route.

Pitch one: 5.7 – 60m: from a limestone slab below an alcove at the bottom of the obvious large crack: climb the face on clean limestone to the left of the crack. Near the top of the pitch work right to a good belay stance on a ledge with a bolted anchor to the right of the crack.
Pitch two: 5.4 – 30m: climb up and out of the big blank scoop to the face on the left side of the crack. Belay on a ledge beside the blank scoop of rock with face climbing above. Bolted anchor.
Pitch three: 5.9 – 45m: crux pitch. Climb on smaller face holds with fewer options for protection, a little run out at times. Belay from a ledge from a small deceased tree with a bolted anchor. (Update: 4 bolts have been added to this pitch to protect the crux and the runout at the top of the pitch)
Pitch four: 5.6 – 60m: move up and slightly right from the belay and climb the face to the left of the large crack or stem and squeeze directly up the chimney. Angle begins to ease off higher up. Bolted anchor is on the right side in the chimney.
Pitch five: 5.6 – 60m: climb directly up the wide chimney. Rock quality deteriorates on this pitch, leader needs to climb with care to avoid knocking loose rock down on the belayer. The bolted anchor is on a small grassy ledge to the left and just outside of the chimney.
Pitch six: 5.7 – 60m: Chimney steepens at the start of the pitch and then eases higher up. Test holds and watch for larger loose blocks. A single bolt belay is in a rocky corner, lots of options and ledges for belays.
Pitch seven: 5.5 – 30m: Climb blocky terrain to the notch in the ridge, a fun hand traverse along the ridge bypasses a very large and precariously perched boulder. Belay from a good stance on the other side of the ridge. GEAR: 60m rope (single or twins), gear to 3” (double up to 1”, extra .4 / .5 / .75 recommended), 10 alpine draws min. DESCENT: from the notch, scramble down a small gully behind the ridge and then traverse left on rubbly ledges to the grassy plateau visible to the left. Once on the plateau, either cross the meadow and talus to gain a col on the ridge and proceed to the summit of Mt Aeneas (marked by a large cairn) or, locate the descent gully on the right and descend via the normal route (3rd class). The normal route descends a steep talus gully (snow in early season), crosses the rocky basin and returns to the tarn. Pick up the trail back to Pedley Pass and back to the parking area (2hrs). 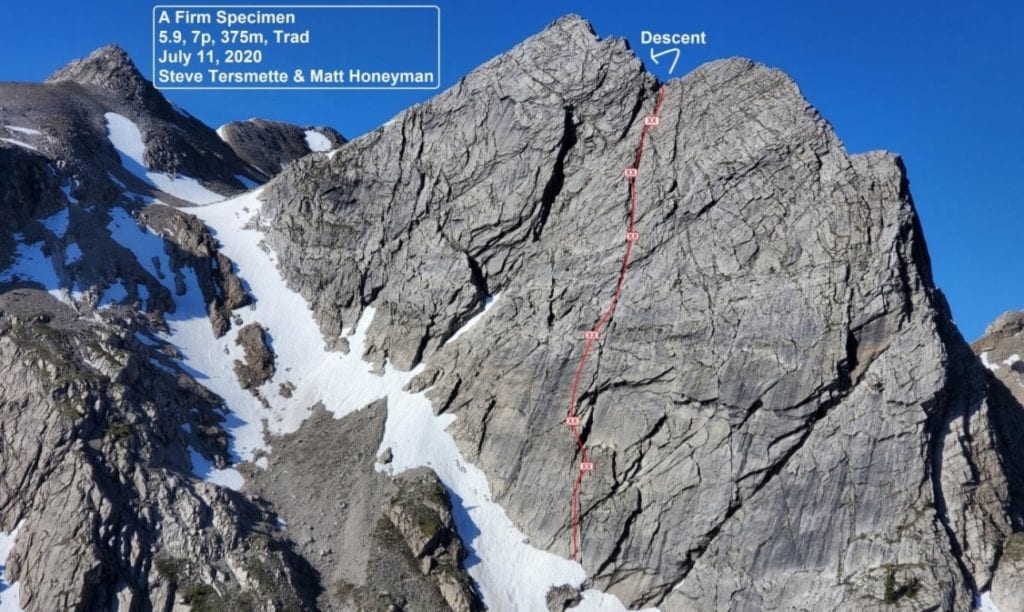 Other Climbs in the Area
1) Morrow/Mauthner/Mauthner, 3p, 5.8 – From the approach trail, about 10 min from trailhead, slabs visible through trees. This line climbs a broad, aesthetic slab feature. The line starts along a right facing corner in the lower left portion of the slab (P1), crosses the face (P2) then climbs the upper right slab beside a yellow left facing corner. These trailside slabs have been dubbed ‘The
Bowling Alley’. The above line is considered ‘Lane 1’. There are three additional climbs, all similar length and grade.
2) McAllister/Sellers, 10p, 5.8 – At the West End of Bumpy Meadows, there is a prominent tower with a long dihedral/corner feature. The climbing lower down is a little indistinct before settling into the large obvious slabby corner feature. For the descent: continue around the tower and then downclimb a long gully that reaches the hikers trail between Pedley Pass and the tarn.
3) The Goat Carcass (Tersmette/Emmett), 11p, 5.8 – A variation of the McAllister/Sellers route. The lower portion of the route follows an obvious slab up a right facing corner. A large overhanging bulge bars progress (looks hard to climb and harder to protect). A belayed downclimb to the right drops you on the dihedral feature of the McAllister/Sellers line. Route is named for both the decapitated goat near the base of the route at the time of climbing and became a fitting name for butchering the route that was apparently previously established.
4) Meat in the Freezer (Tersmette/Gillen), 3p, 5.8 – At the west end of Bumpy Meadows there are two clean obvious slabs on top of each other separated by a pitch of scrambling over loose rock. The first pitch is loads of fun on featured limestone, second pitch is 4th class scrambling on loose rock, the third pitch starts on a steep, runout bulge before continuing on lower angle, textured limestone with more abundant protection.
Please send new route information, descriptions and photos/topos to Steve Tersmette: (steve.tersmette@gmail.com).