South of Yosemite National Park and east of Fresno, California, lies the largest dome in the Golden State, 3,600-foot Tehipite Dome in Sequoia/Kings Canyon. This big remote wall, hidden 14 miles deep in the backcountry, is home to short, Grade II lines, and enormous Grade VI big walls with lines ranging from 5.10 to A4.

In 2020, Ryan Evans, Damien Nicodemi, and Charles English put up the tribute route One for the Homies at 5.10+ and 1,000 feet, which ascends the upper east face of the Dome. From June 20 to 23, 2022, they authored their second major route on the wall, this time climbing the entirety of the south, southeast face at 3,600 feet, 5.10+ C1+ and calling it One for the Ladies. For this route, Matt Carpenter replaced English.

“We named it after our wives, my daughter, and our mothers, for putting up with our habit of going rock climbing,” Evans says.

Navigating by map and compass along the hard-to-follow trail, it took seven hours for the team to reach the wall. 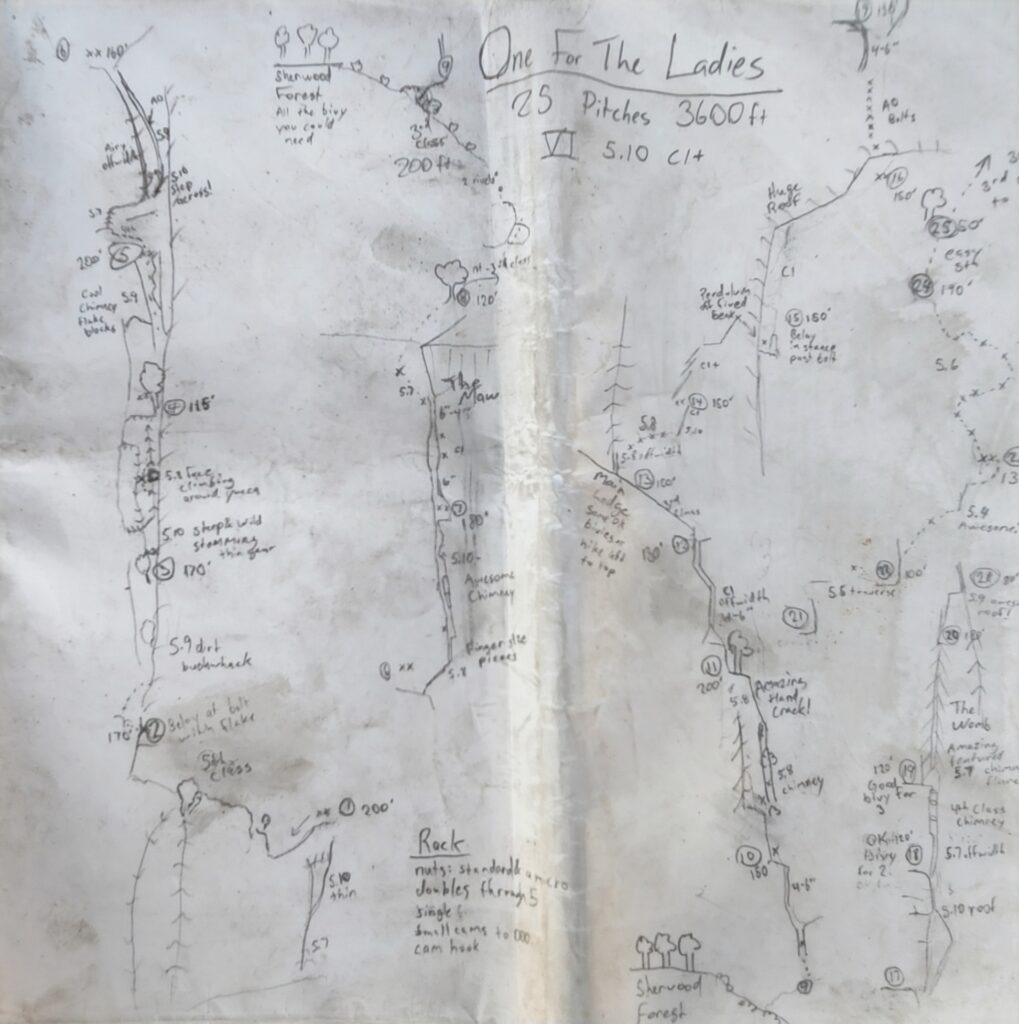 Shortly before completing One for the Homies in 2020, they rappelled the “El Cap-sized dome” to check out the line that would later become One for the Ladies. In 2021 they toiled through the long approach and completed the upper 1,400 feet. This portion, Evans says, is reminiscent of the South Face of Washington Column in Yosemite, “easy aid to really fun free climbing,” he says.

Over two nights on the wall this June,  they returned and climbed the lower 2,000 feet, which they connected to the upper section. Evans describes the lower bit as comparable to the Steck-Salathé route on Sentinel Rock (also in Yosemite) as it follows major weaknesses in the rock.

In total, they placed 23 protection bolts, 20 belay bolts, and 13 rivets. All aid is clean and consists of cam hooks, micro cams, and micro nuts.

Due to the remoteness of the route and hard work required to get to it— plus the major outing of climbing itself—Evans suggests future teams plan a rest day between the approach and route. “Having a rest day will make the climbing much more tolerable,” he says.

As for the route, “I would absolutely recommend it. When the rock is solid, the climbing is excellent. The lower portion of the dome is a bit more variable, and the upper 1,400 feet are amazing,” Evans says, noting “any route that you do out there will be an adventure.”  Some aid sections went through offwidths and dirt-covered cracks.

The climbers experienced their hardest moment on the morning of Day 3. There, bivied on the side of the wall, they awoke to swollen fingers and stiff joints. They were also exhausted from the accumulation of fatigue after so many days on the go. This was partially because they shouldered heavy packs and followed pitches via ascenders instead of hauling loads up the enormous face.

Continues Evans, “there aren’t a lot of places in California to do a grade VI other than Yosemite or King’s Canyon, and the Tehipite Valley is one of the most remote big wall climbing areas in California. It’s a beautiful and adventurous area.”