On Jan. 16, Gripped touched base with Haley to see how the season was going in Patagonia. Haley was heading out and wrote back, “No time today. Big window arriving.” We’ve been anxiously waiting to find out what went down during that big window. Unlike the Dawn Wall, we didn’t have tweets and live-feed from the Valley. It was quite the opposite, Haley and Leclerc were very much alone.

On Jan. 23, Haley wrote the following on his Facebook. We will let him tell the story.

“Yesterday, I hiked out of the mountains very tired and content. On Jan. 18, Marc-André Leclerc and I approached to the Col de Esperanza, and over the following three and half days we traversed the Torres from south to north, starting with the Ragni Route on Cerro Torre, and finishing with El Caracol on Cerro Standhardt.

“I had attempted this traverse in 2012 with Jon Walsh, but we were thwarted by storm. This time there were moments when I thought we wouldn’t pull it off, but we persevered, and more importantly the good weather lasted long enough, with the wind gusts finally getting strong only during our last three rappels to the glacier. This photo is looking down the last pitch of El Caracol, which is probably the most difficult pitch of the traverse, digging through vertical rime to aid off the knifeblade crack underneath. Although no pitches on the traverse are extremely difficult – it’s more of an endurance and logistics challenge.

“For three days, I had been rushing as much as possible, but at this point I finally relaxed and took my time, because with only 40 metres left to Standhardt’s summit I knew it would take a raging tempest to convince us to turn around. Marc-Andre Leclerc [Canada], 22, is a very talented climber. His only previous climb in Patagonia was El Mocho and on day one his unfamiliarity with the terrain on Cerro Torre was evident, but he adapted amazingly quickly, made an awesome climbing partner for our first ever climb together and by day three he was a veteran of climbing on the Torres.

“We are naming our climb the Traversia del Oso Buddha. “Oso” for Bjørn-Eivind Årtun (“Bjørn” means bear in Norwegian, “Oso” means bear in Spanish) and Buddha for Chad Kellogg. This traverse was first envisioned by Bjørn-Eivind, and we made plans to attempt it together in 2011. The first attempt was made by Bjørn-Eivind and Chad in early 2012. Bjørn-Eivind was killed by rockfall a couple weeks later in Norway and Chad was killed by rockfall about one year later on  Cerro Chaltén. They were both amazing, inspiring climbers and wonderful people, and I wish I could tell them that Bjørn’s dream has come true.”

Marc-Andre Leclerc wrote on his Facebook, “Pioneering some new terrain to link from the Col de Los Suenos into El Caracol on the south face of Cerro Stanhardt. Taken during day three of Colin Haley and I’s first ascent of ‘La Travesia de Oso Buddha’ linking all three Torres from south to north.” 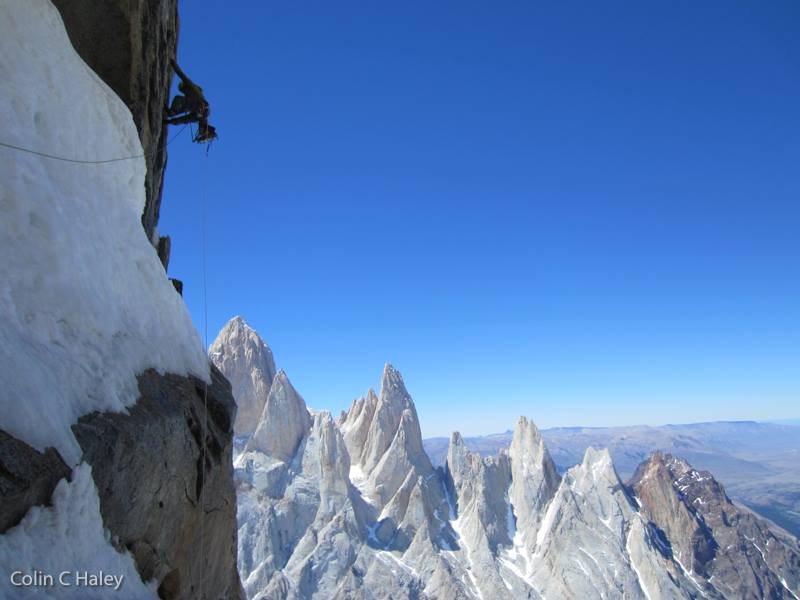