The opening ceremonies for the World Youth Climbing Championships are tonight. Here are the Junior Boys who will be representing Canada. Good luck team! 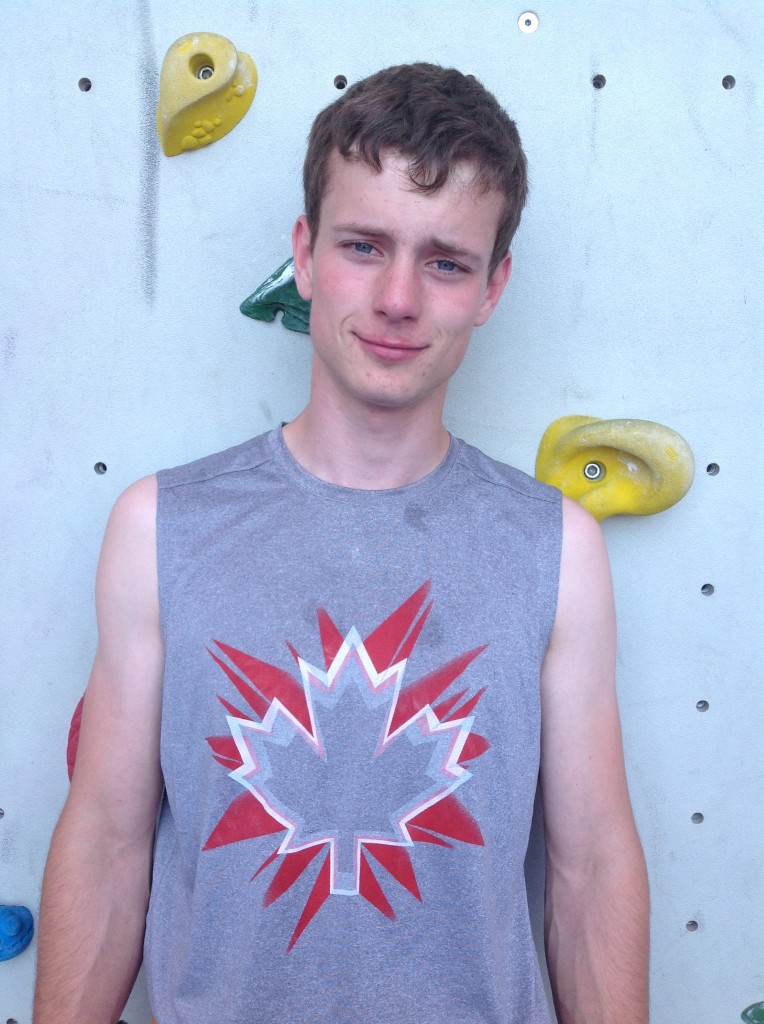 Marc Eveleigh placed first at Youth Nationals and the Youth Cup.He has been on the team for five year and is based at the Calgary Climbing Centre where he has trained for six years, ten hours a week, three days indoors and a few outside. He competed at the 2008 NACC in Montreal, the 2009 WYCC in France, the 2010 PanAm in Ecuador where he was the Champion, the 2010 WYCC in Scotland, the 2011 WYCC in Austria, the 2012 WYCC in Singapore, the 2012 PanAm in Chili where he was the champion.

“To climb at my best and feel like I gave it all on the qualifiers and hopefully a semis route,” says Eveleigh 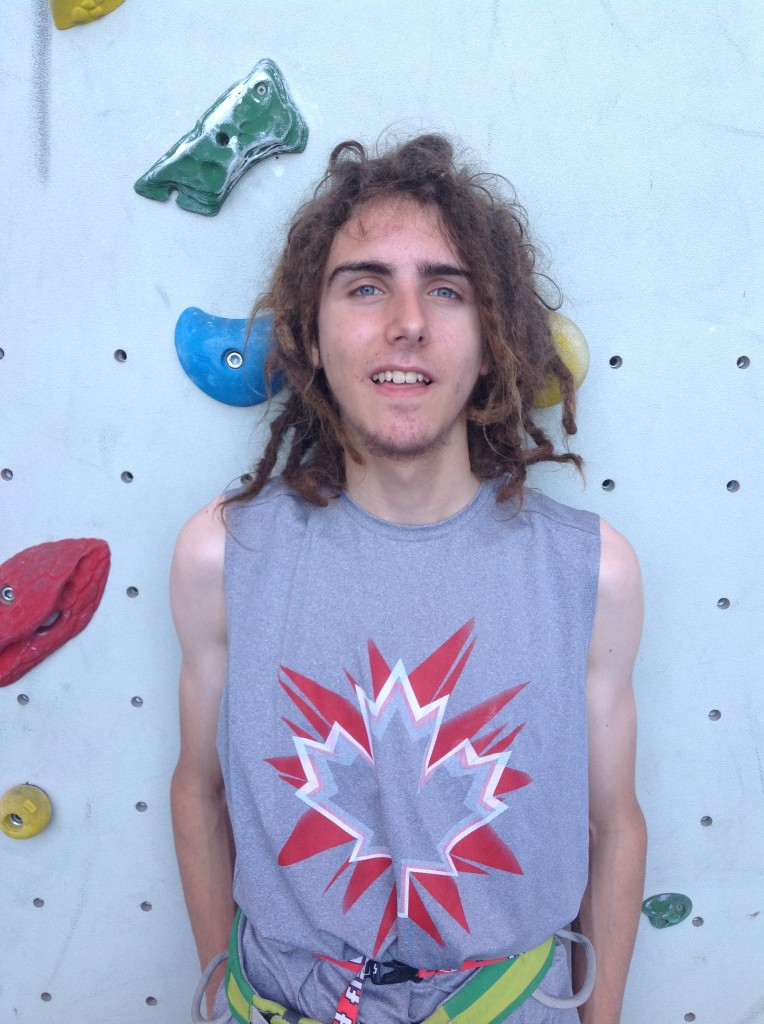 Elan Jonas-McRae placed second at the Youth Nationals and Youth Cup, this is his fifth year on the team and is based in Victoria and Nanaimo where he trains five days a week and has for seven years. He attended the WYCC 2010 in Scotland, the WYCC 2011 in Austria, the IFSC Men lead 2011 in the USA, the IFSC Men lead 2013 in France, the 2013 Bouldering World Cup in Canada.
“I want to climb as best as I am capable of on every route and make it into the final,” says Jonas-McRae. 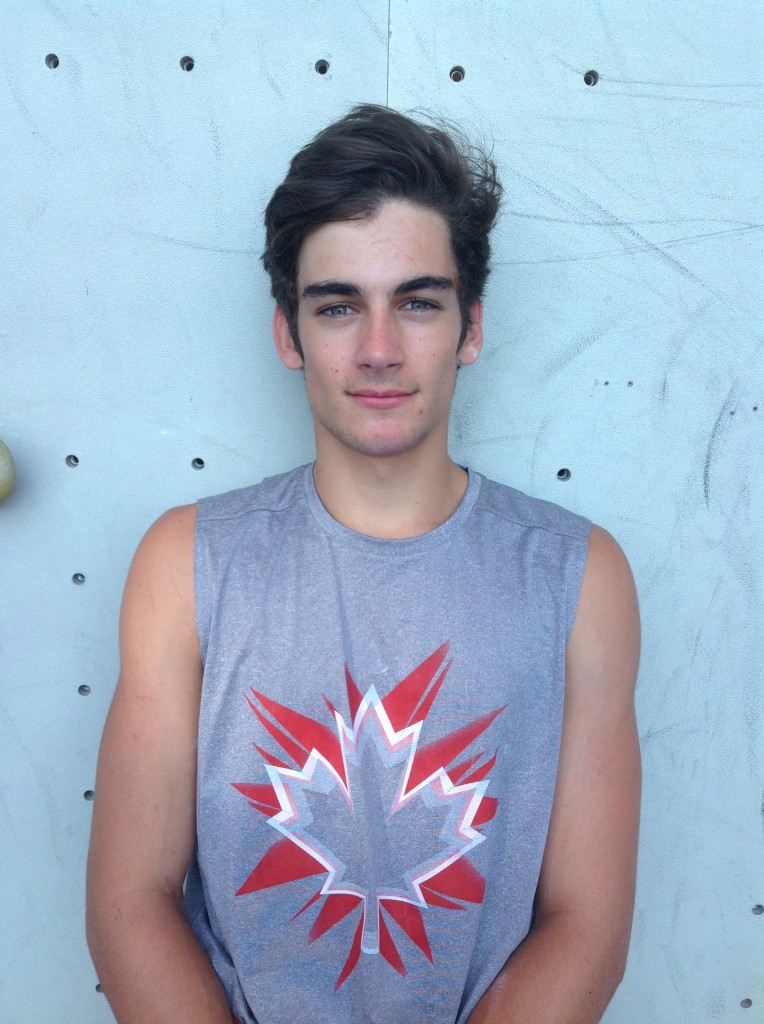 Ian Brenda placed third at the Youth Nationals and Youth Cup, this is his second year on the team, he has been training for six years, four days a week and for drills climbs for 12 minutes on the wall. He competed at WYCC 2012 in Singapore and NACC 2008 in Montreal. He is based at The Hive, BC.

“Being on the national team means a lot to me this year. It has been a goal of mine since I first got into climbing and I am especially excited to compete at the first WYCC in Canada. It will be very exciting having the home crowd cheering for us,” says Brenda. 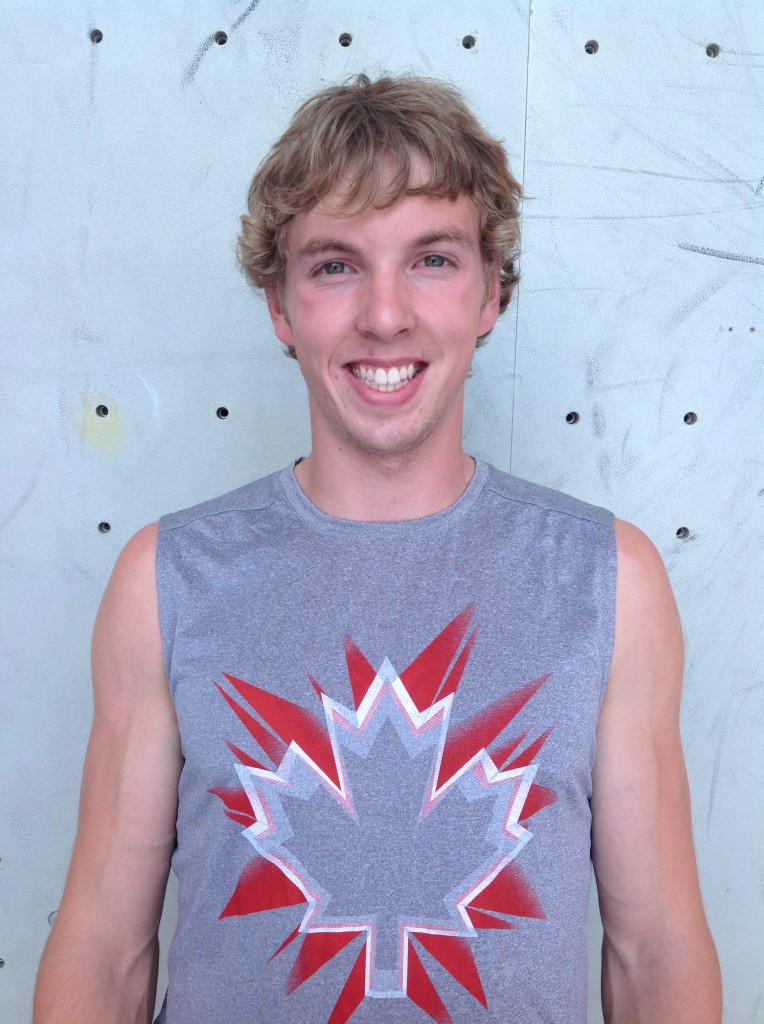 Robert Steward-Paterson placed first at the Youth Nationals for speed, his fastest time is 9.2 seconds, this is his fifth year on the National Team, he is based in Victoria and Kamloops where he trains for four days a week and has been for 11 years. For training he climbs the speed wall blindfolded. He has competed at the WYCC 2009 in France, 2010 in Scotland, 2011 in Austria, and 2012 in Singapore.
“I am proud to represent Canada and would like to make semi’s,” says Steward-Paterson 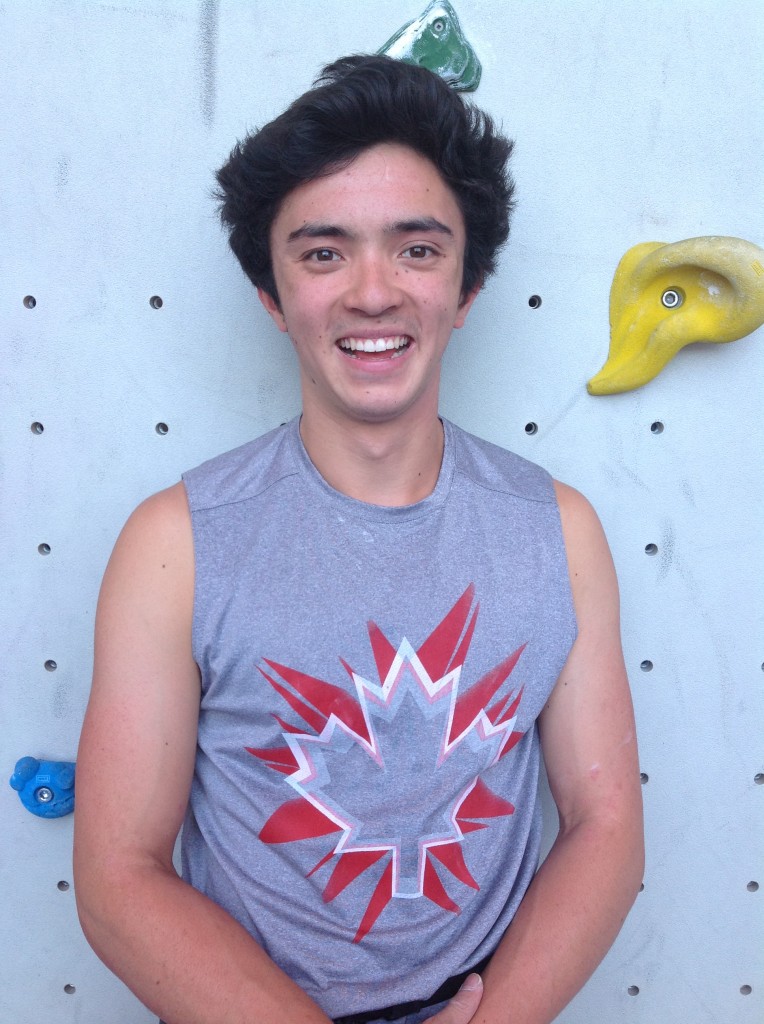 Ryder Hoy placed fourth at the Youth Nationals and Youth Cup, he is based at The Boulders in Victoria and The Hive in Vancouver where he trains for five days a week and has for 10 years. He compete at WYCC 2008 in Australia, 2009 in France, 2012 in Singapore, the IFSC World Cup 2013 in Briancon.
“I am pleased my last year of WYCC is in Canada, and I think the rowdy Canadian crowd and the world’s best climbers will give an exciting show,” says Hoy. 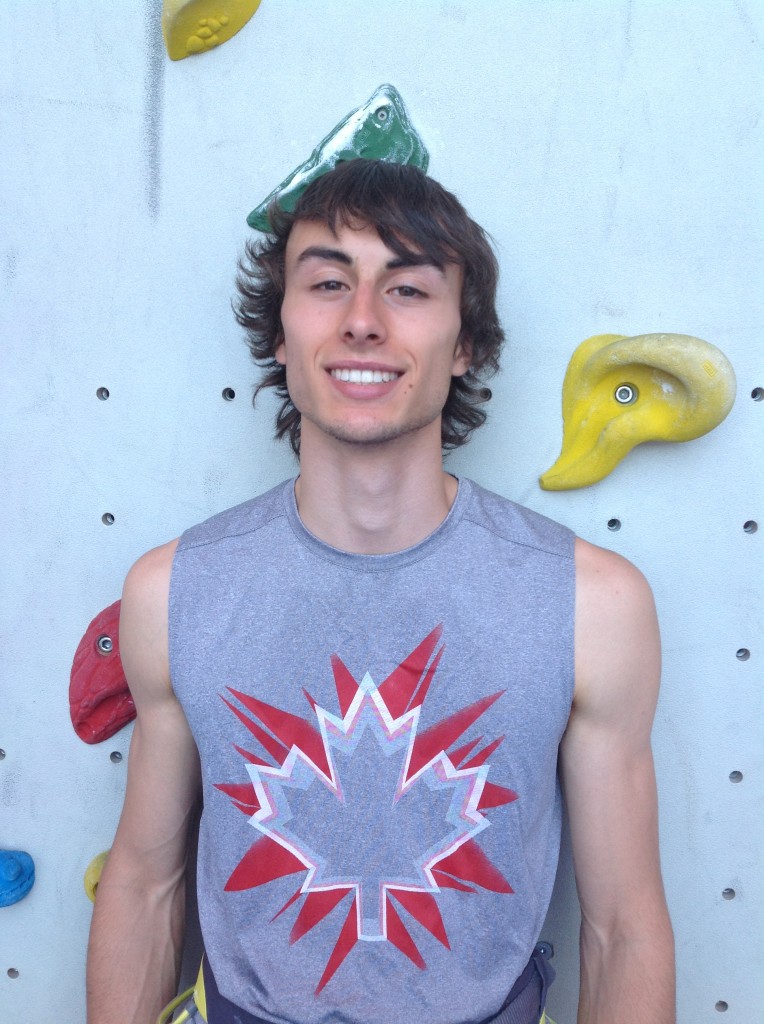 Francis Bilodeau placed third at the Youth Nationals for speed at 9.4 seconds and this is his first year on the team, he is based at Allez Up in Montreal where he has been training for four years, three days a week. For training he focuses on endurance and resistance using a laser pointer.
“I would like to get under nine seconds and make it to the semi’s. WYCC has motivated me to train hard,” says Bilodeau. 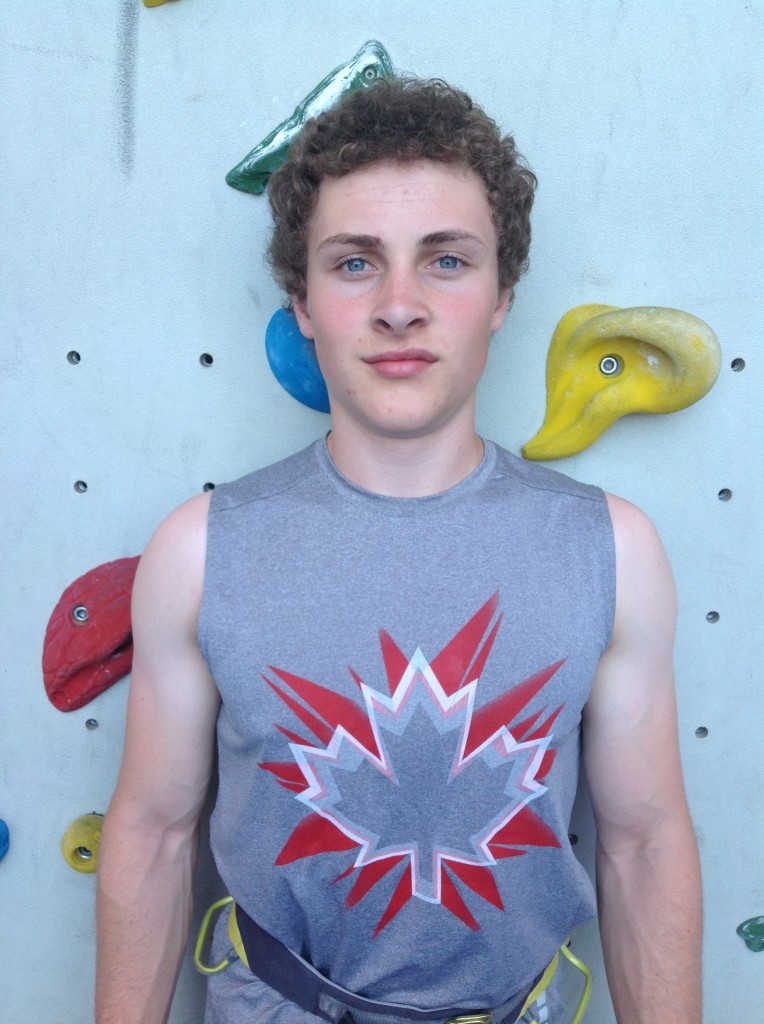 Cam White placed second at the Youth Nationals for speed getting an 11.2 second time, this is his first year on the team, he is based at Boulders in Victoris and has been training for five years, five days a week. For drills he does the tabata circuit workout: eight exercises per circuit, do each exercise eight times. 45 seconds on and 10 seconds off and five minutes, rest between exercises.
“I would like to get under 9 seconds at the WYCC. It is Cool to represent Canada in our country and to know most of spectators,” says White. 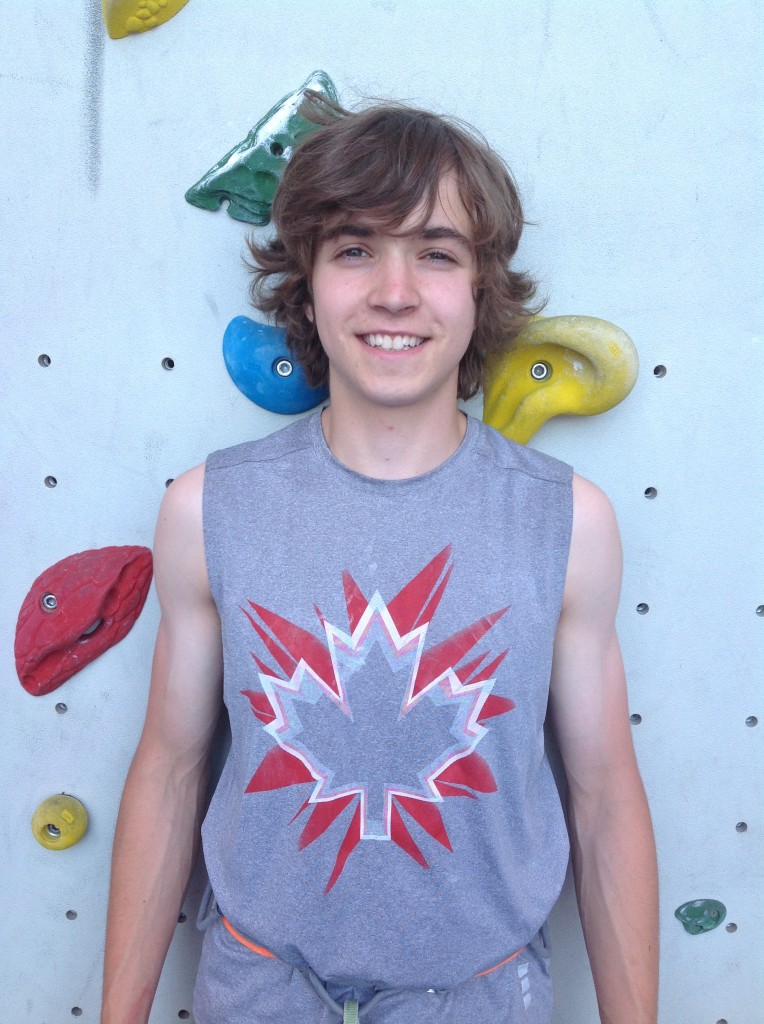 Loïck Martel-Magnan placed sixth at the Youth Nationals and fifth at the Youth Cup. This is his first year on the team where he is an alternate. He is based in Delire, Quebec, where he has been training for two years, four days a week.
“I am a alternate this year, but if I have a chance to compete, my goal will be to do well in the qualification round and then maybe make into semi finals,” says Martel-Magnan.