It’s spring and everyone will be heading to the crags soon, which means the number of people making common climbing screw-ups will be on the rise.

What is a common climbing screw-up? It’s an action or inaction that could cause serious injury or death.

These common climbing screw-ups are far more common than you think and they happen to new and veteran climbers.

So far in the spring of 2018, there have been a number of serious injuries and a few deaths that could have been avoided.

To be a good, proficient climber takes time and practice. If you see someone making a mistake at a crag, speak up and help out. Don’t be caught making one of these common mistakes and remember to wear your helmet.

If you’re lead climbing, the rope should never slip behind your leg. This happens when your line of climbing crosses over the protection below or when you’re climbing a vertical crack and your feet are jamming in front of your rope.

As your legs move over the below protection, be sure to manage your rope so it’s always in front of your legs, ankles and feet.

What Could Go Wrong: If you fall, the rope will slide up your leg until you reach the protection below and then you’ll flip and hit your back and/or head against the rock.

How to Avoid: Make rope management as important as climbing the route. Be vigilant, understand where the rope should be if you have any doubts, get more lead climbing instructions and back off the climb.

Lower Off End of Rope

This one is on you belayers. If you’re lowering a lead climber, make sure you have enough rope.

Too often, climbers jump on a 35-metre route (which means you need a 70-metre rope to lower from) with only a 60-metre rope.

This happens a lot.

What Could Go Wrong: The rope slips through the belay device and the climber falls.

How to Avoid: Tie a knot in the end of the rope can help, but then you still have to get the climber down. Best way to avoid is to read the topo, ask around and understand what length rope you need before heading up. Some crags now require 80-metre ropes. 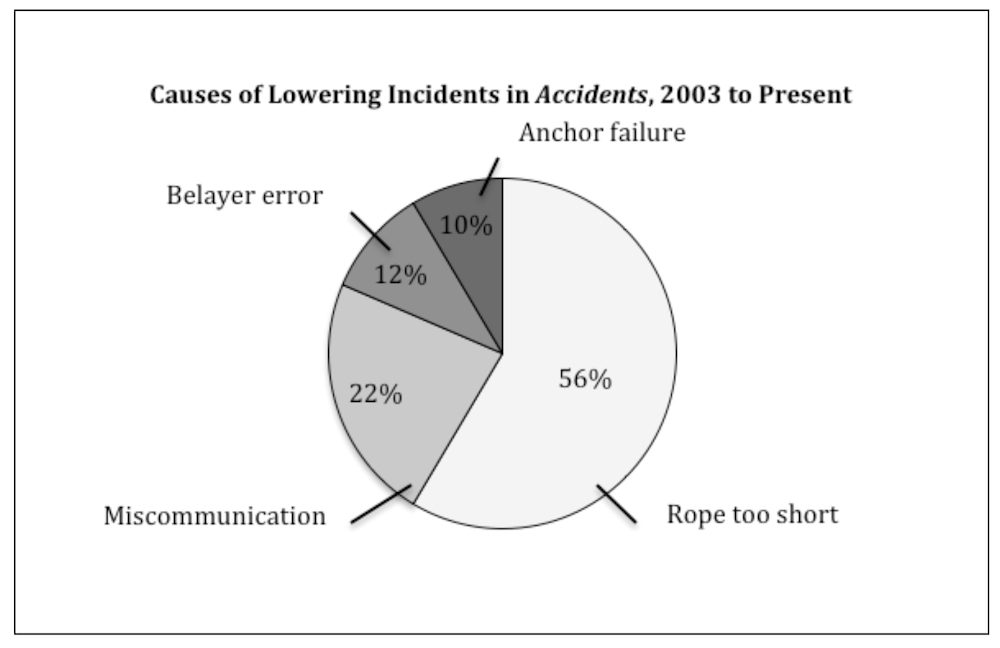 Another one for you belayers. Giving a lazy belay can be done in so many ways that every year, climbers figure out new ways to be lazy.

Some lazy belays: too much slack, not watching climber, checking your phone, talking to other climbers, short-roping, standing too far from the cliff and daydreaming.

What Could Go Wrong: So many things. But if the climber falls and there’s too much slack then they could hit the ground or a ledge.

Worst Case: You get pulled up and into the rock and the climber hits something, everyone is injured.

How to Avoid: Be a good belayer. Pay attention, put the phone away, watch the climber and keep good communication.

Sounds crazy right? But it’s not, every year, climbers rappel off the end of their rope(s). Often done while simul-rappelling but common for single-climber rappels.

This is as common as the other screw-ups above and climbers die from this human error every year.

What Could Go Wrong: Climber falls from the ropes to whatever surface awaits them

How to Avoid: Always tie knots in the ends of your rappel ropes. Not just any knot, a well-done double-fisherman. Single knots are known to slip out when loaded.

Even more than that, avoid simul-rappelling unless its an emergency.

Communication is key in climbing and there are many errors people make. Often it’s because of the distance beteween the belayer and climber.

One common mistake is the “take” or “safe” command.

If a climber wants to rest on the rope, they yell “take” and sit back on the bolt or gear.

If a climber is at an anchor and wants to be off belay, they yell “safe.”

What Could Go Wrong: There’s no belay and the climber falls. The belayer tries to grab the rope to arrest the free-fall.

Worst Case: Climber hits the ground and dies from trauma.

Double check to be sure you agree on the actions about to be made. Make eye contact and/or just watch what the other person is doing.

If you’re setting up a top rope, then you need to access an anchor on top of the climb.

Approaching anchors can be sketchy work, especially if the anchor is close to the edge. It’s common for climbers trying to reach an anchor to trip and fall from the top.

Also, remember to extend the anchors to avoid ropes running over edges.

What Could Go Wrong: The climber falls from the top of the route.

How to Avoid: Have a belay when approaching hard-to-reach anchors. Or rappel off a nearby tree to access the anchor and then pull the rope once you’re clipped in and drop it down the route.

Don’t approach anchors where you could fall from the cliff. That kinda defeats the purpose of a top rope.

So you wanna be a trad climber, eh? You bought a rack of shiny gear and watched a YouTube video and think you’re ready to place finicky pro when cramping at your max grade.

What Could go Wrong: You’re too pumped to place gear. You don’t know how to read the crack size and select the appropriate cam/nut.

You over-cam, under-cam, don’t understand multi-directional pieces and when you fall, rip your gear.

There’s too much rope-drag because you don’t know how to extend your protection and it pulls you off.

How to Avoid: Being a good trad climber takes years of practice. Don’t rush into it. Start on climbs that are well below your redpoint grade.

Get proper instructions, understand how every piece works and how it can fail. Know how to build three-point equalized anchors.