Due out on in late September through Mountaineers Books, Rich’s memoir is informative, entertaining reading for climbers, photographers, and armchair adventurers alike.

“You met up with the big dog,” Alex Honnold said to me this summer at the Outdoor Retailer show in Denver after I sat down with photographer Corey Rich to learn about his upcoming memoir. Those are tall words from the world’s best free soloist, but Honnold was right. As a visual storyteller Rich, whose work appears in motion pictures, business journals, and with Fortune 100 companies — and on the covers of Climbing and Rock and Ice — is one of today’s top adventure photographers.

After his early days as a fixture in the ‘90s Yosemite big wall scene, and as a shoestring budget photographer, he’s since traveled to Patagonia, the Alps, Pakistan, and the Middle East. His viral images from the Dawn Wall film, for example, took his work to the stratosphere, garnering him tens of millions of views. Today his work appears in publications all over the world.

In addition to being a business owner and photographer traveling from one assignment to the next, Rich teaches photography and film workshops, is a frequent lecturer — he has a deep passion for sharing — and offers online courses, and he’s an ambassador for Nikon and has several sponsors.

“Yvon Chouinard said he was an unintentional business person. That’s like me, you have to be talented and work hard, but also have that passion,” Rich said.

The book is reminiscent of the late-great chef Anthony Bordain’s Kitchen Confidential: Adventures in the Culinary Underbelly, where Rich shares the secrets of his society with the greater public. Having personally traveled and worked closely with Rich for a many projects, including to South America with The North Face, I’m familiar with his tireless work ethic and subtle, fun humor; both make it into Stories Behind the Images: Lessons from a Life in Adventure Photography.

Rich points fun at himself in the book with self-deprecating lines, once referring to himself as “Being pretty short (and only kind of smart).”

The pages also contain his best photos, with images of Tommy Caldwell freeing the Nose, Chris Sharma on his 5.14d Three Degrees of Separation, Alex Honnold ropeless on the Nose, and female climbers Ashima Shiraishi and Beth Rodden. There are also kayakers making enormous waterfall drops, bow hunting scenes, skiing, snowboarding and seaside running. Additionally, there’s a chapter dedicated to T.V. star Bear Grylls for the series Rich covered for the Discovery Chanel. Many of these are his friends, people he’s formed a bond with for life.

“There is nothing I enjoy more than sitting around the campfire and weaving the yarns,” Rich told me while wolfing down a burrito. “That’s the origin of the book — the older you get in the adventure world, that Rolodex of stories gets bigger and bigger.”

As a soft-cover title of just under 300 pages ($29.95 USD), it was made so readers can take the book in their pack when traveling, on the subway, or to the beach. The polished images — “I consider myself a perfectionist,” he says — supporting the 56 essays in the book often include Rich hanging from a static line with his camera facing the subject. Chapter names include The Image That Launched My Career, Creative Secrets, Seeing and Skiing, Beckey, and Lines in the Sand (And Snow).

Rich, raised as a gymnast with Olympic aspirations, discovered climbing at age 13 and his world changed overnight. Going into the sport, he was already fiercely strong from years of training in gymnastics – he could do 35 pull-ups – making him an instant success on the rock. So enthralled by the sport, and after his first taste of outdoor climbing, he immediately started taking photos of climbers and scenes he’d encounter at the crags; meanwhile, gymnastics faded into the background.

“Maybe being a gymnast lacked the ‘cool’ factor of being a star quarterback,” he wrote. “But it gave me body awareness, a high strength-to-weight ratio, and mental discipline. It also taught me how to suffer. At an elite level, gymnastics is hard, and it hurts badly, every day.” 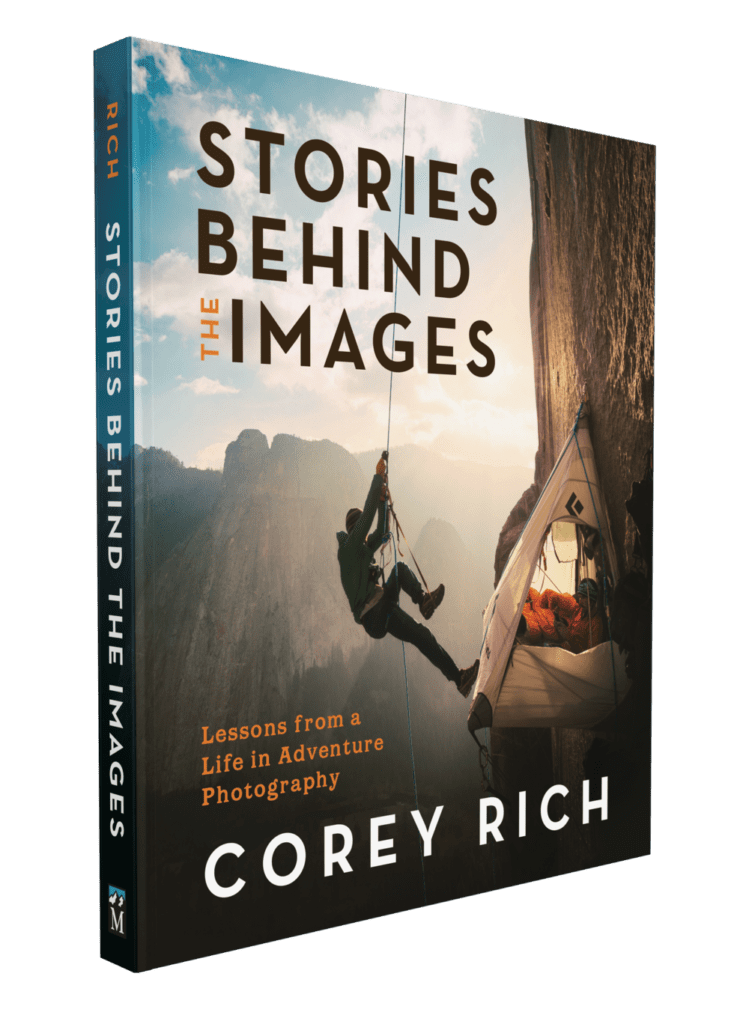 “In the early days, I remember counting out my savings of $3,000 for to last me six months on the road. When I ran out of money I’d just keep traveling. That’s the beauty of being young and falling in love with climbing and photography.”

He’d often hike up the East Ledges of El Cap in the middle of the night, and then rappel into place at sunrise to get shots of stars Chris McNamara or Tommy Caldwell (and a laundry list of others). During the filming of Dawn Wall, which took place in the dead of winter, and often at night, he’d hang in place for hours as he trembled in the cold and as his legs fell asleep. But as soon as it was go time, he’d snap into motion.

Today, “It’s still the pace of go-going, with everything getting crazier. But the style of projects has changed. There are fewer nights that its 2 a.m. where I’m driving to El Cap. Now it’s a group of five flying to Switzerland. But those trips to El Cap were training and have made these international trips easier” he says.

Now 43, Rich lives in South Lake Tahoe, California with his wife, daughter and family dog, where he runs his photo and film agency Novis Select. He’s one four partners. There he manages a staff of 15 employees as they produce work for everyone from Google to the Discovery Chanel, to Apple and to Amazon. “It’s just fun,” he says. “I still love the adventure style project where you’re sleep deprived, hungry, scared and covered in sweat.”

Years ago, in college, I was sitting in my dorm room when I got a call from Sports Illustrated. They wanted me to shoot a profile of some guy from Berkeley who had climbed El Cap 54 times. “And he’s only 21!” the editor exclaimed. “He estimates he’s spent 10 percent of the last seven years of his life living on the side of a wall!” Turns out this guy was Chris McNamara (@chris__mcnamara), who I’d never heard of at the time. Photography has brought me all over the world and introduced me to a lot of really interesting people, but what’s most amazing to me is that it has also introduced me to people like Chris, who—beginning with this assignment for Sports Illustrated—would end up becoming one of my best friends. It’s been more than twenty years since that phone call came through, two decades of adventures on rocks, up and down bike trails, in business, and in life as we are now each raising our respective families in South Lake Tahoe. So here’s to phone calls that come in out of the blue, here’s to saying yes to opportunity, and here’s to many more years of adventures coming our way. @sportsillustrated // CHRIS MCNAMARA – THE SHIELD, EL CAPITAN. YOSEMITE, CALIFORNIA 70-200MM LENS / F/4 / 1/1000 SECOND / FUJI VELVIA FILM // CONTEST!! Tell a story about your photograph and win a NIKON Z50 w/ 16-50mm VR kit lens! @NikonUSA is a champion of all visual storytellers, and has been a huge supporter of my storytelling career for years. That’s why we are giving away a Nikon Z50 with 16-50mm VR kit lens to the person who tells the best story behind their picture posted on Instagram. 🙌🏻 Rules: ✅ Post your best photograph and story in the caption to Instagram before December 31. ✅ Use the hashtag #storybehindmyimage ✅ Follow & Tag @coreyrichproductions and @nikonusa ✅ That’s it! I’ll choose a winner with the help of my friend @AndrewBisharat, one of the best writers I know, and we’ll announce the winner on January 7! Good luck! #StoriesBehindtheImages #NikonNoFilter