In 2013, a climber found a metal box that contained rubies, sapphires and emeralds while on the Bossons Glacier in the French Alps. They were on board an Air India passenger plane that crashed around 50 years ago above Chamonix. 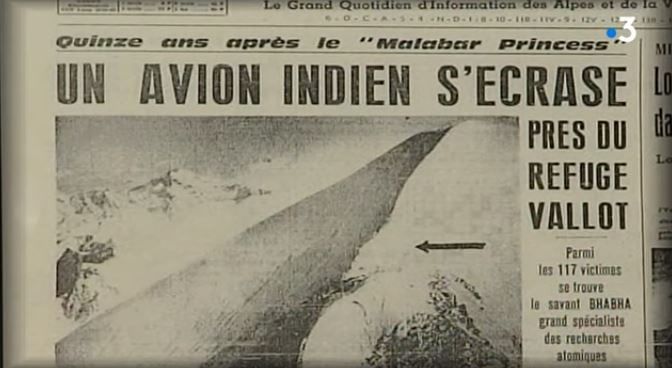 The plane was meant to land on Jan. 24, 1966, in Geneva, but the Boeing 707 crashed near the top of Mont Blanc. All 117 people onboard died in the crash. The box of jewels, marked “Made in India,” remained hidden under snow and ice, until the climber stumbled upon them.

The anonymous climber gets to split the findings with the village of Chamonix, only because authorities couldn’t find any living relatives of the deceased passengers who owned the jewels. In total, the stones are worth about $213,000 CAD.

Chamonix officials released this statement on Facebook: In 1966, the crash of Kangchenjunga, Air India plane, in the Massif of Mont-Blanc killed 117 victims. In 2013, emeralds and sapphires were discovered on the Bossons glacier. After a search for heirs that turned out to be fruitless, the stones were shared this week by two gemmology experts between the municipality of Chamonix and the discovery. This unique geological and historical heritage is now joining the chamoniard mineral collections. This story is the subject of a topic in the 20h de France 2, this Friday 3 December. The report will also be an opportunity to (re)discover the Chamonix Crystals Museum, completely renovated. The place is the indispensable screen for all these jewels of the depths revealed by the passion of men. New collections, an enlargement and a new scenario make up this space that opens its doors to the public for the first time on December 19, 2021.

The climber spoke to Le Parisien that he didn’t regret turning the jewels over to authorities. The Washington Post reported, “The Boeing 707 carrying the gems was one of two Air India flights that crashed into Mont Blanc in the mid-20th century. The first — Air India Flight 245 — did so in 1950 during a storm, killing all 48 people aboard. Sixteen years later, Air India Flight 101 hit almost exactly the same spot, ejecting the gems. The cause of the crash has been the subject of conspiracy theories over the years, mainly because one of the passengers killed was Homi Bhabha, the father of the country’s nuclear industry.”

Several climbers have found human remains, luggage and wreckage from the two flights that crashed into Mont Blanc over the years, including landing gear in 1986, and a bag of mail in 2012.

While not the exact same, this has a similar feel to the 1993 Hollywood movie Cliffhanger, where climbers find bags of cash that dropped from a crashing plane. The movie may or may not be loosely based on the time a plane full of weed crashed in Yosemite National Park. Climbers found the weed, smoked the weed and sold the weed. Read about it here.