Top Scottish climbers Andy Nisbet (65) and Steve Perry (47) have died in a climbing accident on Ben Hope in Scotland.

News of their deaths emerged on Tuesday, after mountain rescue teams and a coastguard helicopter were scrambled from across northern Scotland following reports of an accident on Ben Hope at about 3.45pm. The rescue operation continued through the night.

On Wednesday, Police Scotland said: “Sadly, the bodies of the two men were discovered on the north-west side of Ben Hope shortly after 2am on Wednesday by the helicopter crew.”

Nisbet and Perry were regular climbing partners with a number of major routes to their names. It’s believed they finished the route they were on when they fell from the upper slopes over 200 metres.

“Their deaths are a huge loss to the mountaineering community in Scotland and, in particular, we send our condolences to family and friends of both Andy and Steve,” said the Scottish Mountaineering Club.

“We would like to thank members of the mountain rescue teams and others who were involved in responding to this accident.”

It took a two day operation with nearly 50 mountain rescue team members and two Coastguard helicopters to recover their bodies.

David Whalley, a former RAF mountain rescue team leader, said Mr Nisbet was “the most active, prolific mountaineer that Scotland has ever produced.” 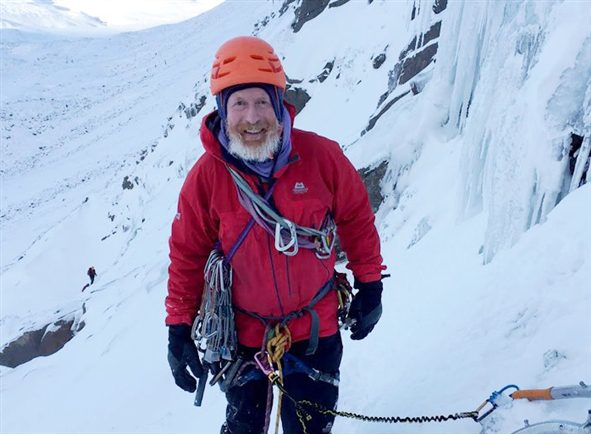 In a blogpost honouring both men, Whalley said Nisbet had left a huge legacy. Many climbs were known as “Nisbet routes” because he had first found them.

“Many will miss that wild beard frozen up and his vagueness when chasing new lines on the mountains, but what huge enthusiasm on the crag,” Whalley wrote.

Andy Nisbet on Hidden Buttress Direct, Coire an t-Sneachda, January 2016. . Andy and climbing partner Steve Perry were killed in an accident on Ben Hope this week. . I first met Andy at a raclette party at Sandy Allen’s place (which was less weird than it sounds). I was a bit starstruck tbh and didn’t really know what to say. But he was a lovely man; friendly, softly spoken and full of psyche. The following day Andy, Steve, Bill and I went and climbed Hidden Buttress Direct for an easy day. Andy forgot his hardshell and borrowed my orange windproof. I remember being so nervous leading the first pitch with Andy’s expert eyes watching me. We all had a great day and I got to follow Andy around for the next week on the BMC International Winter Meet, trying to learn all I could and enjoying all his incredible stories. You were a legend and an inspiration Andy and you’ll be terribly missed by the entire community. 😢 . #scottishwinter #winterclimbing #andynisbet

Martin Moran wrote a touching story about Nisbet here, in which he said, “Everyone who ever climbed with Andy as a friend or client came away feeling privileged to have shared his rope.

“His frugality was legendary – a winter night spent at Andy’s lair in Boat of Garden required an Everest-grade sleeping bag – yet he was generous in spirit and effortlessly courteous to all he met. Experts, legends, hot-shots, beginners – Andy was a gentleman to everyone. So longed as they professed a love for the hills they made the grade as far as Andy was concerned.”

Our deepest condolences to the family and friends of Andy Nisbet and Steve Perry.