Memory Lane is a new fully bolted 10-pitch 5.11 on the Canmore Wall in the Ehagy Nakoda range above the town of Canmore. For those familiar with the area, it’s the north-facing face between Ship’s Prow and Ha Ling.

The wall presents obvious challenges for climbers, but it wasn’t climbed until 1998 when two routes were added: Lex 5.9 and Centurion 5.10. Over the years, the wall has seen some development, such as the 10-pitch Kurihara at 5.10d and a few winter mixed routes, but there’s more room for steep routes. It takes less than two hours to reach and can be walked off.

“When me and Michele Hueber bolted this route,” said Mirko Arcais about the new Memory Lane, “we found an existing bolt with an old carabiner at the base of the upper headwall at the top of pitch four (top of the lower bowl).” Arcais believes the bolt was probably the high point from an early exploration. As he says, “From there the wall steepens up considerably and we didn’t find any signs of humans.”

Memory Lane is a great addition to the Bow Valley, which has has dozens of fully bolted rock climbs, such as True Grit 5.10 and Valley View 5.9. “The route has 10 fully bolted pitches and is set up for rappels,” said Arcais.

“We tried our best to stay on good rock and clean what we could, and with some future traffic it should clean up well. all the cruxes are quite short and within 5m from the belay. The crux on pitch-six had a key hold snapping off, so it might be a boulder move in the 5.12-ish range? We had to A0 to clip the bolts, lower down and free climb the left side with a couple of 5.11d moves instead. eventually we’ll probably move those three bolts to the left, unless someone figures out the moves.”

The route starts at a single bolt belay in the broad gully, close to the existing route Lex, about 50 metres left from the west ridge, and it follows the right-hand side of a prominent groove which runs for the entire length of the wall. The line offers great variety, with face climbing, stemming and overhangs. It also provides a straightforward rappel line for the west end of the cliff. The rock quality is above average for the area, and it is mostly solid from the third pitch up, but as for any other route in the Rockies, it will need some traffic to clean up properly. The wall is facing East, and it gets early sun in the morning and full shade in the afternoon.

Approach: From the Kamenka Green – Wilson Way junction walk west for about 150m and from there work your way up the forest until you will find a gully. A steep trail marked with red tags on the right-hand side of the gully will quickly take you to the Highline trail. head east from there for about 20m past the gully and locate a steep trail that climbs on its left-hand side. Follow this trail as far up as you can, and about 100m below the wall, cross the gully and start working your way up and west to the lower buttress 50m from the west ridge. Locate a narrow left ramp that leads to a single bolt belay in the broad gully beside the lower buttress. Gear: Single 70m rope, 11 quickdraws, 3 alpine draws.

P1 – 30m, 5.2, 1 bolt. Easily climb up and right past a bolt to a chain anchor.
P2 – 35m, 5.7, 11 bolts. Step right into the groove and follow it until it steepens. From there, traverse right for a few moves and step up
to a chain anchor.
P3 – 25m, 5.10A, 11 bolts. Climb straight up the steep wall to a chain anchor on the ridge of the lower buttress. This is mostly steep 5.9
climbing, with a 5.10A move by the last bolt.
P4 – 37m, 5.6, 8 bolts. Ignore the bolt above the station and walk left to go climb the shady north facing wall and work your way to the
base of the impressive upper wall and a chain anchor. Ignore the two-bolt station on the left.
P5 – 25m, 5.10B, 11 bolts. Step left, ignore the two-bolt station and step up to the next bolt. Work your way up and right to gain a
layback crack and a traverse left over a huge block to a chain anchor in the prominent groove.
P6 – 25m, 5.10D, 13 bolts. This pitch is sustained at its grade all the way to the top and it provides some excellent climbing inside the
prominent groove. Stem your way up the groove, the left wall and the groove provide most of the holds and the right wall provides great
back rests. step right onto the face higher up to reach the chain anchor. This pitch is done best without a pack.
P7 – 15m, 5.11A-AO, or 5.11D, 9 bolts. The crux of the route. Originally the line was going to be climbed on the right-hand side of the
overhang right above the belay, but unfortunately a key hold decided to fly downtown and it made it a lot harder (Maybe 5.12-13??). If
these moves don’t work out then the best way is to clip the first 4 bolts, get lowered down, and climb the left-hand side of the overhang
using tiny holds to reach an amazing flake above the bulge. A few more tricky moves will get you to a chain anchor.
P8 – 30m, 5.10C, 11 bolts. Easily climb the wall directly above to a bulge. Pull a couple of 5.10C moves and follow easier terrain to a
large bay and a chain anchor.
P9 – 25m, 5.11B, 12 bolts. Thin holds will lead you to the impressive overhang. Power your way through it and climb easier rock above
to a chain anchor.
P10 – 30m, 5.11B, 10 bolts. The rock quality of this pitch is excellent, extremely sharp and grippy. The hardest moves are between the
first and the second bolt. Follow easier rock and beautiful water runnels all the way to the top.

Descent: Reverse the route and tie knots. All the anchors are set up for rappels. with a 70m rope the 7th rappel (between station 3 & 4) will take
you to a comfortable ledge on the lower buttress a couple of meters away from the next anchor. From there you will need to do a few
easy steps off rappel to reach it, and there is a bolt above the anchor if you wish to secure yourself to it in order to reach it 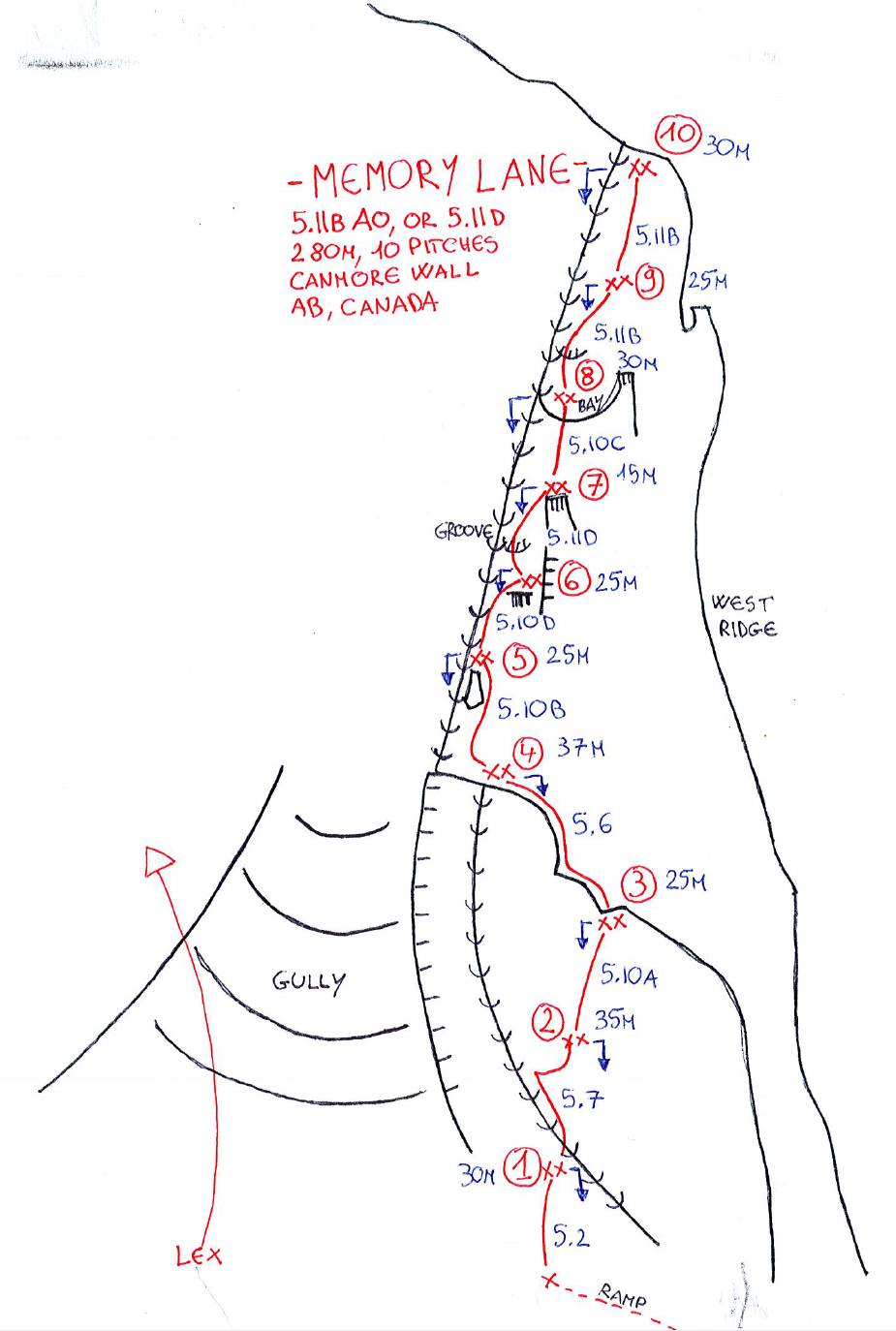 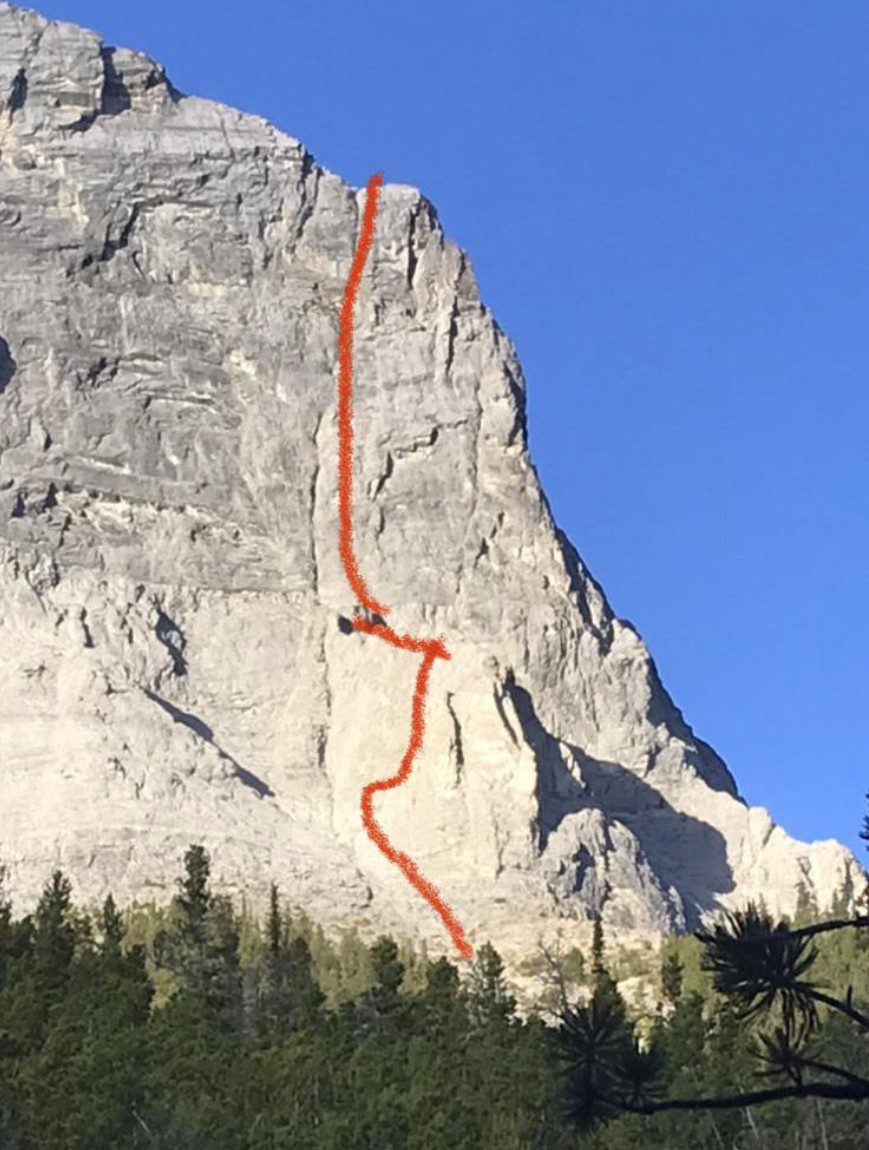