By the 1990s, ice climbing had become a popular winter sport anywhere ice could be found in Ontario. Whether it be north of Lake Superior or south of Toronto, climbers were making first ascents, photographing their climbs and documenting them in guidebooks.

In the mid-1990s, two guidebooks were published that became must-haves for the day and are still considered excellent references for what’s what in winter. In 1993, Shaun Parent published North of Superior, which includes routes in Orient Bay, Kama Bay and Ice Station Superior. And in 1995, Marc Bracken and Norbert Kartner released Southern Ontario Ice: a Climber’s Guide.

Both guidebooks included dozens of now-classic ice routes, maps, photos, first ascent info, history and more. It’s been nearly 20 years since they were printed, so, just for fun, here’s a look back. 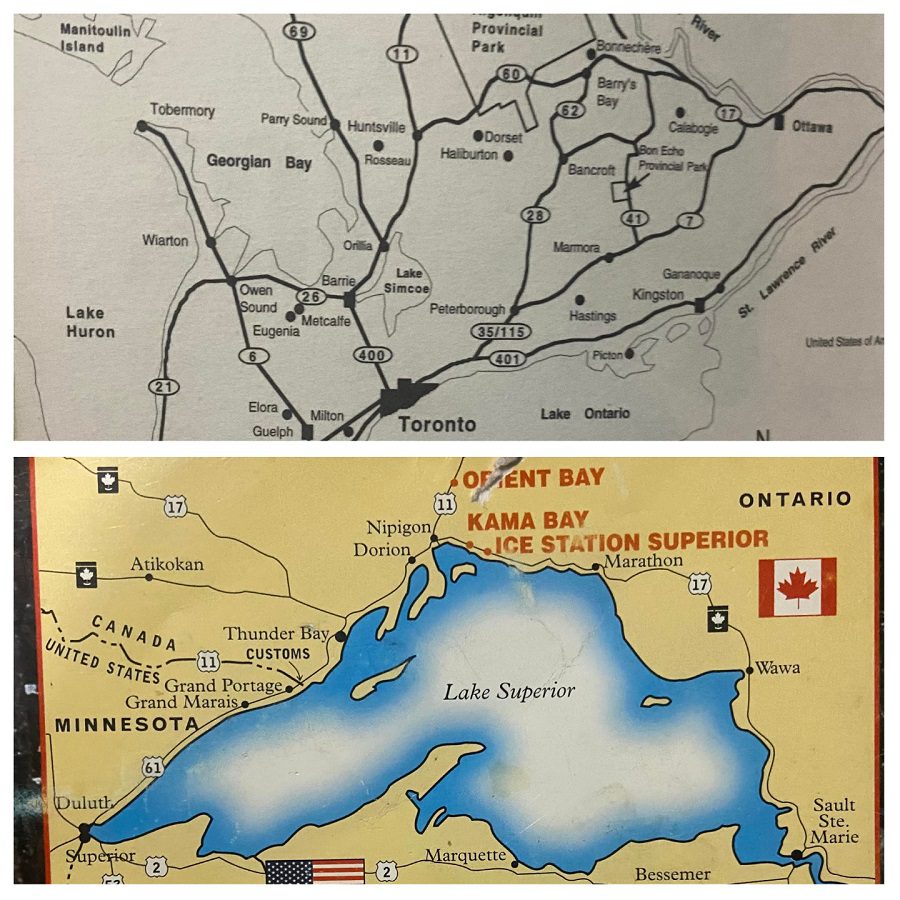 Acknowledgements: Both guidebooks start with the authors dedicating them to loved ones. From North of Superior: “This book is dedicated to my lovely wife and climbing partner Joanne, for her many years of patience and comradery since the very beginning.” And from Southern Ontario Ice: “To Mary Lou, Clifton and Mary Claire for enduring a man obsessed – NK.”

History: Both guidebooks give detailed accounts of how ice climbing came to be. One sentence in Southern Ontario Ice reads, “There were numerous pins, some very old and corroded, in the granite cracks where they climbed, and the local restaurant and motel owners told stories of a crazy rock and ice climber who frequently climbed in Bancroft in the 1960s, once with a very pregnant partner in tow.” And in North of Superior, one sentence reads, “February to March 1981… The first climb done this year was Tempest, which was led by Paul Dedi armed with four ice screws, one 11-metre rope, a 75-cm ice axe and a short rock hammer.”

Ice Screw Rating: In North of Superior, route ratings are displayed using illustrations of ice screws. For example, Ranxerox Tangent, a 50-metre WI4, gets four ice screws, while Sucker Icefall, a 10-metre WI2, gets one ice screw. More ice guidebooks should use the ice screw rating!

Phone Numbers and Access Hotline: Guidebooks don’t often include phone numbers anymore, because we all have the internet in our pocket, so there’s a lot of nostalgia when flipping through these guidebooks. On page 45 of Southern Ontario Ice is a sidebar titled Support Yourself, Support Access, and within it is a phone number to an Access Fund Hotline… what? Check it out:

WI5 Tick-List: Back in the 1990s, there were only a handful of WI6 routes climbed in Canada and WI5 was at the cutting-edge of what was possible in Ontario. Several things played into this, including ice gear wasn’t as advanced as it is now, and there just aren’t many WI6 ice climbs in Ontario – even today. However, the WI5s listed are classics to this day, and make a great Ontario WI5 tick-list. From Southern Ontario Ice: Overbite WI5- 25m, Old Laughing Lady WI5 40m (condition dependent), Frankenhooker WI5 65m, In Limbo WI5 25m; and from North of Superior: Adrenaline Solution WI5 70m, Parallax WI5 50m, 10% Real WI5 75m, Reflection Wall WI5 80m, Starquake WI5 70m.

Hully Gully: There are several multi-pitches listed in the two books, but none might be more popular with beginner climbers than Hully Gully in Orient Bay. Since the 1980s, it’s been countless climbers’ first “big” ice line. Parent’s description for the four-pitch 140-metre WI2+ is, “The long, low-angle gully begins with a first pitch of usually interesting ice. The rest of the climb is almost alpine in character…”

Route Beta: It’s clear that each description was written by climbers with intimate knowledge of the climb. The climbs are listed with the name first, followed by the grade and height, some approach info and pitch beta. When available, photos have been included of climbers ascending – the images are usually butt shots. In North of Superior, the first ascent team is listed in the route description, while in Southern Ontario Ice the first ascent info is in the back of the book. 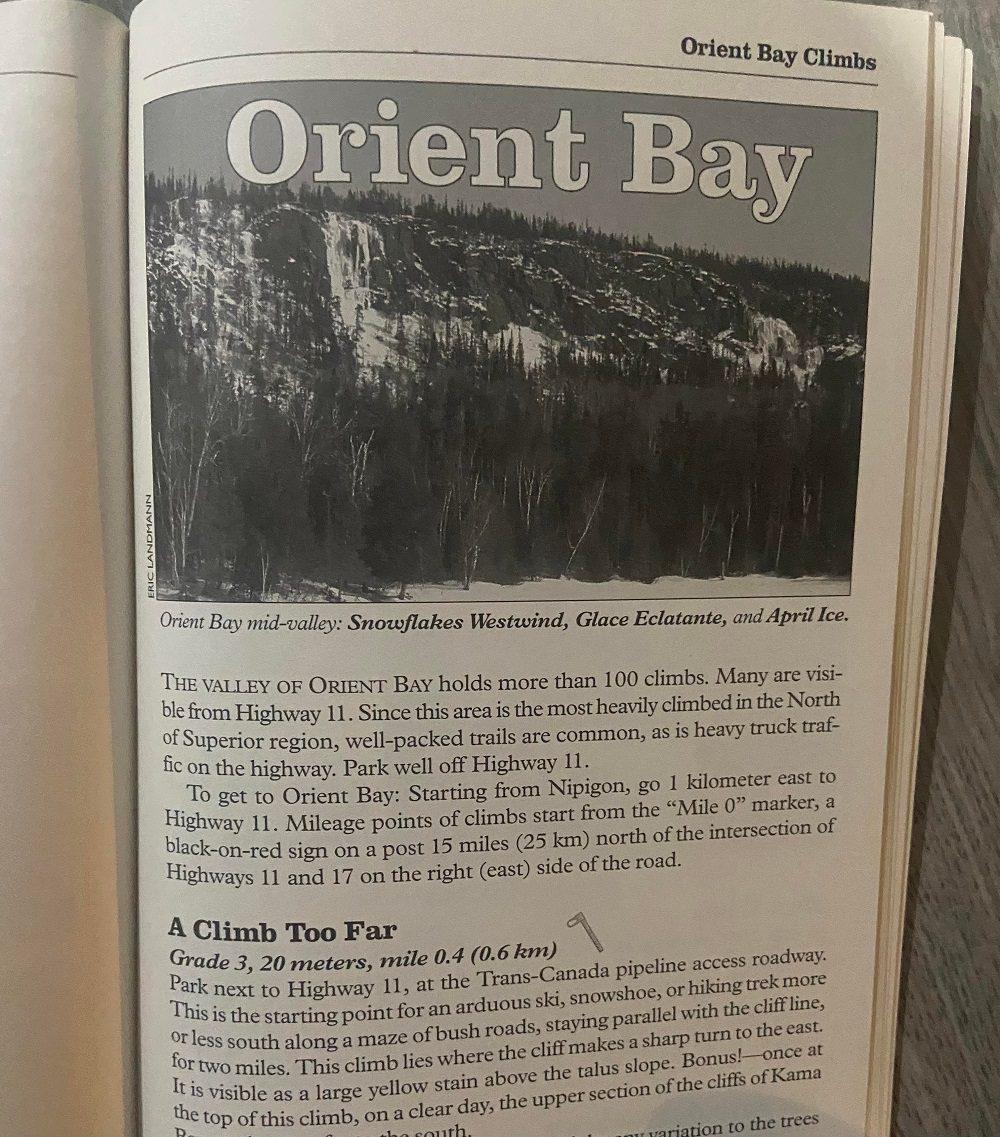 Southern Zones: The layout of Southern Ontario Ice is easy to follow and breaks the province into climbing regions that many of us know today. From the Southern Escarpment (an area where the routes hardly form anymore) to the Northern Perimeter, where classics like The Snake WI4 are listed – this guidebook had it all.

Frankenhooker: When the Southern Ice guidebook was published, this was one of the most difficult ice climbs in the region. It rarely forms these days, but was once the area test-piece. The description for the three-pitch 65-metre WI5 sums it up: “With its gaping, dogtoothed, overhanging ice it is probably Southern Ontario’s most impressive ice route, and every neophyte ice climber’s worst nightmare.”