British Columbia’s Guy McNamee and Sophie Buitendyk are this year’s Canadian Lead Climbing National Champions. Competition in Monday’s finals was fierce, with podium spots being determined by the thinnest of margins. In men’s, first place was separated from second and third by a single hold. In women’s, it was only the clock that divided first and second, as both competitors reached the same high point.

McNamee won gold in the men’s category after being the only athlete to reach hold 26. What made his win even more special was that the finals were held on his 20th birthday. McNamee also won gold at the boulder finals on Friday, earning him the title of double champ at this year’s Nationals. A happy birthday, indeed.

The 2022 Canadian Climbing National Championships was run by Climbing Escalade Canada (CEC), the national governing body for competition climbing in Canada, as recognized by the Canadian Olympic Committee and International Federation of Sport Climbing (IFSC). The lead finals were held at The Hub in Mississauga and saw the top eight men and top eight women from the semi-finals competing for the title of Lead Climbing National Champion. Women’s and men’s categories each had their own route, approximately 15 m (50 ft) in length. Climbers had up to six minutes to reach the route’s top.

As climbers moved through the route, points were awarded for each key hold they reached. If positive movement toward the next hold was observed, they were awarded with a “+”. For example, a climber that securely grabs the 20th hold and then makes a move for the 21st hold but falls, would be awarded a point of 20+. The women’s route had only 26 points to the top, the men’s 28. If competitors were tied in points, the time it took them to reach their final hold would be used to break the tie.

Finn Battersby, who won bronze at Friday’s boulder finals, put in a solid performance at the beginning of the men’s portion of the night, reaching an impressive hold 25+. The next climber, Matthew Rodriguez, matched Battersby’s high point, but he got there quicker, putting him in the lead.

Guy McNamee tied in a few competitors later. His climbing was calm and smooth and he even flashed a smile for the camera while resting on a sloper. He then experienced some difficulty getting through a series of slopey pockets, likely making the sequence more difficult than it needed to be. He next amazingly chalked up while on a very overhanging pinch to confidently reach hold 25.  He quickly found a left heelhook that allowed him to securely grab hold 26, the terrible big sloper that sent Battersby and Rodriguez groundward. McNamee fell shortly after, unable to make progress toward hold 27.

The final two competitors didn’t reach McNamee’s high point, leaving him with the gold medal and the title of double champion. McNamee also won gold in the 2019 Lead National Championships. He came in sixth at last year’s comp.  The men’s final results can be seen below:

Several nationally-ranked climbers and HPP members did not compete in this year’s boulder nationals, including Victor Baudrand, Oscar Baudrand, Sean McColl, Lucas Uchida, Sean Faulkner, and Ethan Hoffman. McNamee’s twin brother Kindar, who came in second in the boulder finals, did not qualify for the lead finals, coming in 10th in the semis. 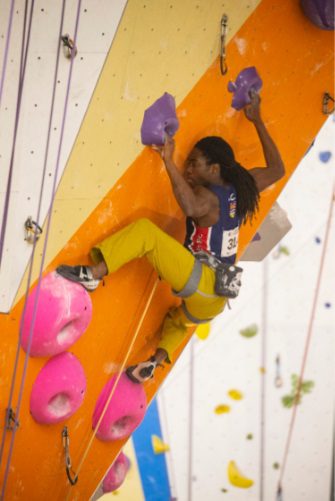 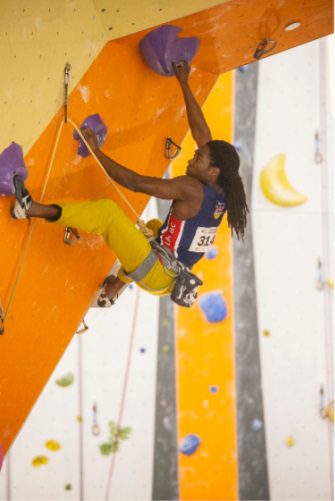 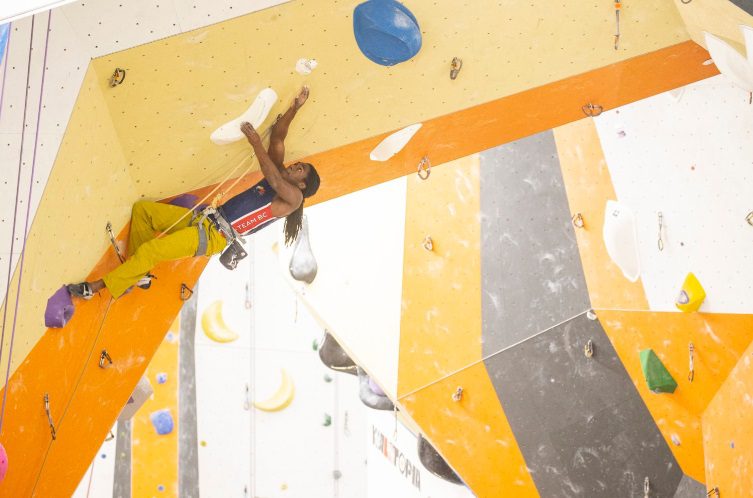 McNamee clipping before reaching out for hold 25. Photo by Ruby Photo Studio. 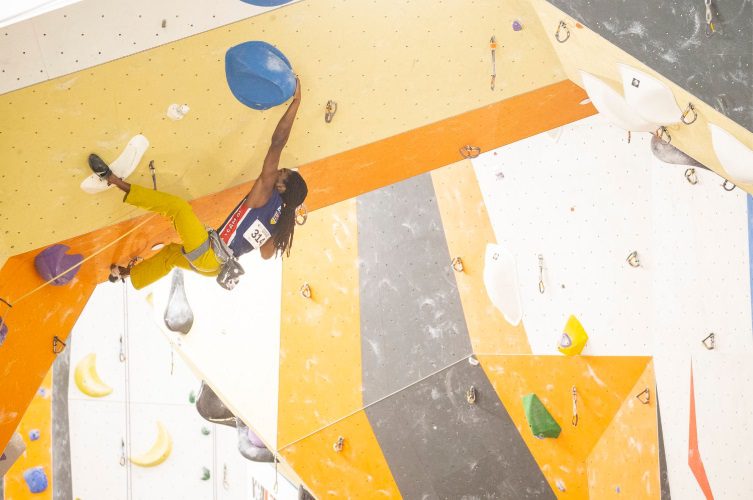 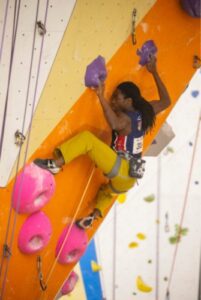 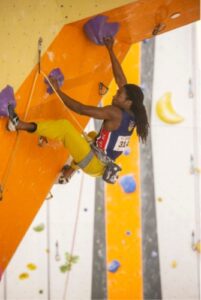 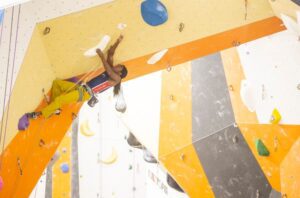 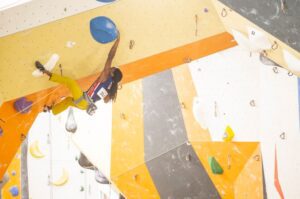 Heading into the lead finals, HPP member Babette Roy was the favourite, placing first in the lead semi-finals and winning gold in the boulder nationals on Friday. Early in the evening Cedar Pidgeon of Squamish, BC had a strong performance, reaching hold 20+. At only 16-years-old, Pidgeon is having growing success in the comp scene and has already enjoyed a successful outdoor bouldering career. The young athlete climbed V11 at 11 years of age.

Two competitors later, Evangelina Briggs bested Pidgeon by reaching hold 21+. Later in the evening, Buitendyk roped up and easily made it through the lower crux, employing an interesting thumb catch beta instead of the strenuous gaston used by her competitors. She then climbed quickly to the high crux and secured the crimpy hold 21. She fell lunging for hold 22, leaving her with 21+. This tied her in points with Briggs, but she reached 21 faster, edging her into first place.

Roy was last to tie in. She set off, making quick work of the route when she suddenly had an unexpected fall. Her right foot slipped off a volume as she was heading to hold 12. This same tricky sequence also tripped up Caiya Taylor-Ainslie, Emi Takashiba, and Bronwen Karnis. Buitendyk was thus crowned the 2022 Canadian Lead National Champion, her first time winning gold at nationals. Last year she placed seventh. The women’s final results can be seen below:

Several nationally-ranked climbers and HPP members did not compete in this year’s boulder nationals, including Alannah Yip, Indiana Chapman, Rebecca Frangos, and Paige Boklaschuk. Madison Fischer competed but did not make the final round, placing 10th in semis.

It’s interesting to note that no athlete in either gender category topped a route in the finals or semi-finals. The relatively short walls forced route setters to compress the difficulty, creating routes with tough bouldery sequences.

With the lead finals over, the 2022 Canadian Climbing National Championships have come to a close. To learn more about the competition series, read our previous article. To read more on Guy McNamee and Babette Roy’s wins in the boulder finals last Friday, read our article detailing the results.