From camcorders to 4k, climbing videography has come far since Rampage. Though the climbs have gotten harder and the the athletes more professional, climbing media has been slow to develop.

These last years have seen a conventional narrative. This coverage of sick sends has persisted for decades. Though such films will always have a place in media, this last year brought more complex narratives to climbing. One director, Montreal’s Alexa Fay, has produced a film unlike any of this last decade.

Fay’s Disturban is the description of climbing in Montreal. The city itself is as natural to the arts as the climbers are to their sport. Distruban exists at the intersection of these two disciplines. Though Fay exists in both film and climbing, years ago her goal was to be lawyer. She said that her entrance into film, was “a complete fluke. The year before applications to university, I got a job on a film set.”

“These two directors had a film shoot in Northern Ontario. Their travelling nanny bailed a couple of days before so they asked my sister if she could babysit their kid. When she couldn’t, she asked me. I thought, ‘It’s a week of easy money.’ I went up there and at the end of the week, the directors needed someone on set. ‘Would you be down to stay for another week?’”

Fay laughed, “After two days, I called my mom and said ‘This is what I am going to do for the rest of my life.’”

“When I started, I was a production assistant. I was in charge of the craft tent. I would bring coffee, pick up trash, and make sure that there were enough snacks for everybody. I never saw it as a bottom-of-the-food chain job. It is an important job. Every job on that set was important. There were some that were more important, but if I didn’t do my job properly, people would be hungry and that wouldn’t help the production. It was a team effort, a collaborative thing. I guess that is what hooked me.”

“I came back to Montreal and thought I that I would not be going to university.” After some convincing, Fay, “decided to apply to one program at one school. ‘If I don’t get in, I won’t go.’”

Naturally, Fay was admitted to her program. Still, her focus never shifted. Film was the goal. Between summer internships and a video-production job, Fay would begin to develop herself as a technically proficient production coordinator and researcher.

“I loved it, but the jobs I was getting were part-time so I was also working in a restaurant.” Though Fay loved her work, she also wanted to live in another country at some point in her life. Taking the opportunity to move, Fay went to England. She said, “I was looking for a job there, and I had climbed a couple of times, so I applied at this climbing gym. I got the job and that’s how I started climbing.”

“Before going to England, I was really interested in editing and pre-production. I bought a camera, but I never really had the confidence to develop ideas or be at the camera.”

“The job I had at the climbing gym was at the front desk.” While working there, the gym asked Fay for help in another field. “They said, ‘You have a camera and a background in film. Would you take photos?’ It was a slow learning curve from there.  I didn’t start doing videos of climbing until I came back to Montreal a year later. I started working at Allez Up.” 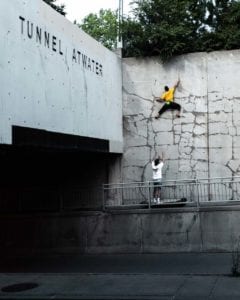 “Antoine Séguin also started working at Allez Up as the Director General. He is really into film. Working with him reignited my passion for making videos and pushed me to have more confidence with the camera. That is when I started getting into storytelling films and documentaries.”

Throughout this time, Fay would meet Geneviève de la Plante, one of the owners of Allez Up. Plante would approach Fay about an idea to promote women in climbing. Fay was excited and before long on the Board. A little while later, Fay, Plante, Léa Chin and Sophie Claivaz-Loranger brought the initiative through its first round of routesetting workshops across the country.

“With the B.I.G. Initiative, we always had this idea about making story telling videos. Part of the mission with B.I.G is to promote women. A great way to do that is through workshops and through teaching. Another is through visibility. I think video is a great way to have that visibility.”

While Fay worked, she became inspired to complete longer projects.

“Disturban was definitely a part of a turning point, but another part was moving in with my roommate, Simon Dufour. We have this same passion and we are always bouncing ideas off of each other and having creative conversations about all of these projects that we could have.”

“He really wants to be on the camera. That is what he really likes doing. I thought, ‘Okay, where do I fit into that?’ I remember I was helping him shoot a film for his school and he was joking around that I was the director. That is when I started thinking about it more: Why couldn’t I be a director? Why couldn’t I direct something? I think that I have the skills for it. Maybe I don’t have the confidence right now, but I think that this is something that I can push toward and develop.”

Disturban would become that project. In composition with Simon Dufour and Antoine Séguin, Fay began.

“The idea of the urban climbing film came from Antoine because of his Disturban Behavior which was made 15 years prior. At the end of Disturban Behavior they don’t send the LaSalle Metro and it says, “To be continued.” It had just never really been continued. It had been 15 years so Antoine said ‘We could do Part 2.’”

“That is when we started developing Disturban and thinking of who we could get to be part of it. We wanted it to be a story. We wanted to have these people that you could get attached to you and then get to know. The climbing is primary, but it almost becomes secondary to the story that’s unfolding. I think that that’s something that appeals to me in films.”

“When you have this connection with the athlete or you get to know them better, it’s more than doing a climb. We really wanted Disturban to be a film that anybody could understand but that would also appeal to the community of climbers.”

“It’s easy to do something that’s for the general public but then you lose that essence of climbing.”

Fay smiled, “It was cool. Once it came out, we got so many positive responses from climbers and non-climbers alike. Everybody had a favourite person, a favourite character, a favourite moment.  It was cool to be able to create something that people could identify with in completely different ways.”

Though the film was an unquestionable success, it was not a simple production.

According to Fay, “The biggest difference was the legal aspect of it. It’s not illegal but it’s not legal. Sometimes it’s tolerated but often we would get kicked out within 20 minutes of being there. That was definitely a challenge. We had to go, they had to send, we had to get the shot and then we had to leave before we got kicked out. You wouldn’t have the opportunity to get a close up or another angle.”

“This isn’t in the film, but we went to a spot near Allez Up. It was the end of the day and everything had gone really well. We had only gotten kicked out of the LaSalle Metro. It was the first day that we went, and it was is in a park near the river under a bridge. We were chilling, taking our time, and Marco climbs, but he doesn’t climb to the top because it’s pretty sketchy. He asked, ‘Are you guys ready for me to do the top?’”

“The lighting was not so great because there was this big shadow so we decided to wait another hour. Antoine and I decide to go back to Allez Up to get harnesses and ropes and put those on the bridge to lower down and get better angles. We get back to the bridge, we put the fixed lines up, jug up to the top of the bridge and a security car pulls up from the casino on the other side of the river. They say, ‘What are you doing? Don’t move. We’ve called the police. You have to stay here.’”

As Fay continued, she laughed, “The police show up, everybody leaves except for Antoine and Simon. The police said, ‘You can’t be here. You know there are places indoors where you can do that. There is a place around here called Allez Up.’ We were like, ‘Ohhh, no way! Thank you,’ and it ended up being fine.”

“Other than that, it was really exciting filming something different. I’m used to filming in a gym or taking photos in a gym. I have shot a lot outside, and it’s always different no matter where you are, but this was a whole other ball game. At the same time that you are filming, you’re worried about the safety of the climber and about security showing up and about a bunch of things. It’s a more complex situation.”

“When we went to do the LaSalle Metro when Marco sent it, we only had 3 pads. He didn’t look psyched. He talks about it in the film. I was there and I said, ‘Marco if you don’t want to do it don’t do it.’

“It was just me and the camera, him and the spotter with these three pads. He can’t fall. I just kept telling him ‘If you want, I’ll go get other pads.’”

“He told me after, ‘Well, I knew if you went to get other pads, it would be too long and I wouldn’t do it.’”

“It’s definitely a difficult situation to navigate. You have to develop a relationship with the people that are in the film and build this trust and hope that they’ll make the right decisions.”

“When Bea fell and injured herself, Antoine and I felt extremely responsible. Whether you’re buildering or outdoor bouldering or in a climbing gym, you can get injured. That’s why I think the athletes need to be able to make those decisions for themselves. You know that they feel pressure to do it whether you’re telling them to feel it or not.”

Fortunately, thanks to a dedicated team and Fay’s own ability, Disturban made its way through production. It became the first high-quality example of its genre in over a decade. This film is one portion of a three-part series to be released in partnership with Jackalope and Allez Up. The next two films tackle bouldering in Val-David with tentative dates for the coming months.

With this film complete, Fay looks toward working with more stories and approaching climbing through unique angles. There are many stories left in climbing. Fay hopes to be the one to tell them.