I travelled to Yosemite recently to meet with one of the most accomplished new-routers in the area over the past few decades. Sean Jones, who’s authored 100 first ascents in Yosemite, balances his work in construction with climbing with his kids Willow, Lily, and M’so as well as climbing with longtime friends.

His first ascents span the South Face of Half Dome, the Ribbon Falls Amphitheater, Bridalveil Fall and Parkline Slab. He chooses aesthetic over difficulty. His routes often parallel waterfalls where he climbs surrounded by rainbows formed by mist in the air.

With decades of new routing under his belt, Jones knows how to pick and establish lines, emphasizing safety over runouts. His backyard crag is Parkline Slab, where he’s turned the 900-foot wall with a spattering of old-school, heady routes into a modern multi-pitch sport and trad area, equipped with beefy hardware at the belay and rappel stations.

In 2019, Jones and Christine Garrett completed the nine-pitch 5.11d Otherworld a sport climb. The slab to vertical adventure line has well-protected cruxes, gets all-day sun and can be climbed fast by teams familiar with the technical edging and smearing found in the Park. Jones bolted the line for his friends and family to enjoy, providing them with a route that requires only 16 quickdraws to do. It can be rappelled with a single 60m rope.

Otherworld begins on Jones’s route Homeworld (2004), before taking a direct line up the wall, where it climbs through featureless slabs via micro foot chips and knobs. Otherworld is one of seven routes, with half of those reaching that summit, Jones has established at Parkline.

Today, Jones lives 30 miles west of Yosemite in Mariposa. Before that he lived in El Portal, the small residential area that butts up against Yosemite’s Highway 140 entrance. Parkline is a short walk from El Portal, making it his then backyard crag. “Homeworld was about home and family and also derived from a Yes song,” he says. “I established Homeworld so I could stay close to home as Maggie was pregnant with my daughter Lily.”

Ten years after authoring Homeworld with Robi Borchard, Jones established a two-pitch variation to the line he called Father Son, which he bolted with his son M’so. He again returned to Homeworld with the late Graham “Grahambo” Hunt and bolted a spire finish rated 5.11d.

Last year, with Christine Garrett, Jones connected his variations on Homeworld to complete Otherworld, a new route, which straightens that line, clocking in at 9 pitches, 5.11d. “Christine was a big force, my equal partner and we swapped leads,” Jones says. “And this was her first big first ascent.” He believes Otherworld is the longest sport climb in Yosemite, and potentially the longest sport climb in California.

Jones constantly talks and is always on the move. He has wild, curly hair and a Yes tattoo on his left bicep, and he loves 90s rock. Though five decades old, he has the energy of someone half his age, but he says his aging body has trouble keeping up with his perpetual excitement.

His home in Mariposa is a shaky trailer with couches folded out for his kids and their friends. Ink marks on the walls mark his kid’s height. A full drum set dominates the space, which he plays as loud as he can, especially when his neighbors are away. Aside from juggling family responsibilities, he climbs every chance he gets. If it’s raining in Yosemite, he’ll spend the time hiking to remote crags, where he’ll trek for hours on end, alone, as he searches for his next first ascent. He describes his perfect day at the rocks as starting before sunrise and ending with him walking back to his car under darkness, the light from his mini headlamp leading the way through the forest. 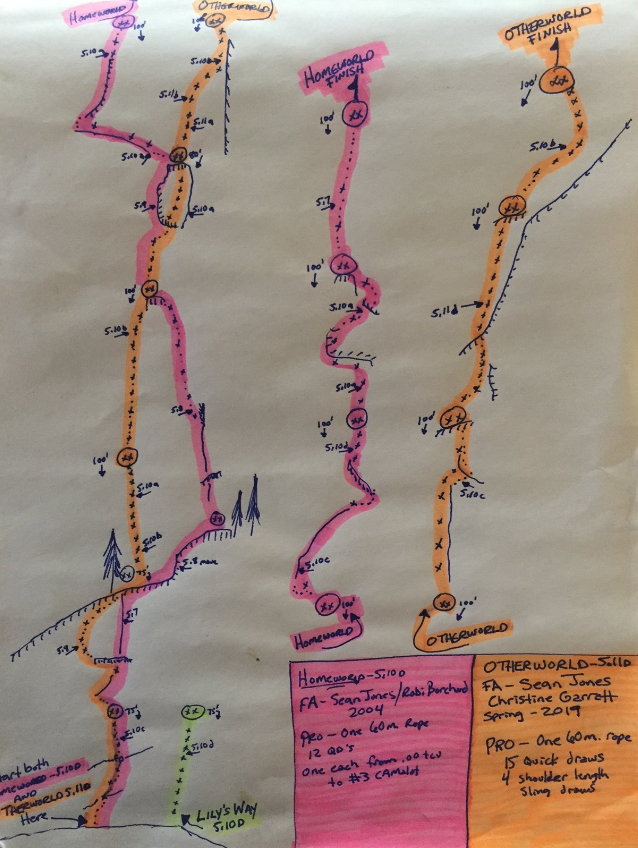 Earlier this week, under sunny skies and warm temps, Jones supported me on an onsight attempt on Otherworld. We met at 8 a.m. at the El Portal Market parking lot, where he pulled up in an aged Prius with his small dog Grahambo sitting on his lap. Bags hung under his eyes as Jones told me that he slept poorly — he missed his kids who were out of town for the night — and to counter his lack of sleep, he had chugged too much strong coffee, making him shaky and sick to his stomach. He dragged on the approach, often suggesting that he wasn’t up for the climb. But he continued, weariness and all — Jones climbs, that’s what he does.

The route begins with vertical, bright white stone, where spaced holds, 5.10c (optional 1 Camalot protects here), connect horizontal seams and cracks that slash the face. Pitch two wanders up easier terrain, 5.9, ending at a ledge with a large tree. From here a bolt line shoots upward for two pitches, via more 5.10, on gray and black stone peppered with flat, single pad edges. The terrain becomes more challenging, with 5.11 slab moves trending up and right to reach 5.10 terrain that leads to the route’s crux. Here a steep, 5.11d, complicated sequence is guarded by a series of moss hummocks. One more pitch of wandering 5.10- leads to the top, offering uninterrupted views of Yosemite’s lower canyon and the nearby town of El Portal. That day under Jones’s support, I climbed confidently but was stymied by two slab moves and the final crux. According to Jones, the route has yet to see an onsight.

Back at the base, with my calves aching from edging for 900 feet and fingertips raw from grabbing micro holds, I was done. The sun was now low in the sky and cold was creeping in, but Jones was itching for one more route. Gone was his grogginess, replaced with his childlike excitement for rock climbing and boundless energy.

He wanted to get in one more line before the last light, but I didn’t have it in me. Instead, we sat at the base of the crag where the sunset bathed the wall in orange-yellow light. Here we talked about our shared affinity for Yosemite. “I want to live here forever,” he said as we followed the single-track back to the parking lot.