Buildering is climbing on the outside of buildings and other artificial structures. It has a long history that dates back over 100 years to the early alpinists.

Buildering is often frowned upon because it often requires trespassing on private property. Even if it’s public property, you can still get into trouble.

In 1895, the great alpinist Geoffrey Winthrop Young, started to climb the roofs of Cambridge University, England.

Students had been scrambling up the university architecture for years, but Young was the first to document this activity. He wrote and published a buildering guide to Trinity College.

Then in 1905, while a master at Eton College, Young produced another small volume on buildering, spoofing mountaineering.

In 1910, George Polley started his climbing career when the owner of a clothing store promised him a suit if he would climb to the roof of the building. He succeeded, and went on to climb over 2,000 buildings.

During the years from 1915 to 1920, buildering in New York City reached its peak. Before 1915, there were few skyscrapers in New York City, and after 1920, the city authorities had legislated to outlaw buildering.

During this golden era, a number of daredevils climbed the tall buildings, but several of them fell to their deaths in the attempt.

Harry Gardiner, who climbed over 700 buildings in the United States and Europe between 1905 and 1918, usually wearing street clothes and tennis shoes, with no climbing equipment.

In 1921, a group of undergraduates from St John’s College, Cambridge, published a buildering guide to that college.

From The Roof-Climber’s Guide to Trinity: “The conquest of the Great Gate in November, 1927, marked a new epoch; and so many fresh climbs have been discovered in the subsequent three years.”

The book goes into great detail about climbing route on structures. The description for I Court Climb is: “This starts in the right hand corner as we face this wall.

“The “tallest of the party” is used as a staircase; and from his head the leader is able to get a hold for his right hand in the little window of the Turret. By this he can hold himself while his supporter substitutes his hands for his head and thrusts him another two feet up the corner. The visible top of the wall can now be reached; but a sloping coping refuses all hold to the groping left hand, until it tries the exact point where the wall joins the Turret. Here the coping is cut away to allow for a pipe-trap and gives a first-class hold. The right hand joins the left and a kick down against the rough wall yields a much needed relief to the supporter.

“Those who prefer to do their climbs on their own hands and feet can back-and-foot up Tank Chimney, at the left hand end of the wall; and walk back to the Turret along it either on the top of the wall of behind it…

“From the roof now reached, an excursion can be made which culminates in a gable commanding an uninterrupted view of Trinity Street. But the roofs traversed on the way are private, and climbers can well afford to renounce its mild pleasure.” 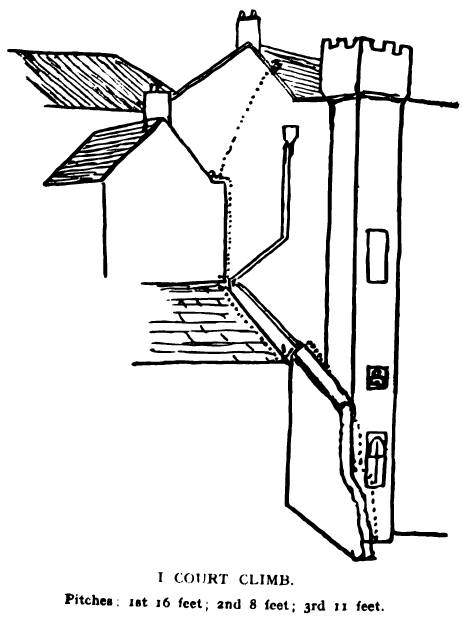 In 1937, a comprehensive and lighthearted account of Cambridge night climbing (undergraduate buildering) appeared in popular print, written by Noël Howard Symington, under the pseudonym “Whipplesnaith.”

In 1947, John Ciampa climbed the exterior of the Astor Hotel in New York City.

In 1960, Richard Williams wrote the third edition of the Trinity buildering guide. Night climbing remained popular in Cambridge during these post-war years.

In 1970, a book entitled Night Climbing in Cambridge was published under the pseudonym Hederatus. Buildering also featured prominently in a book by F A Reeve, published in 1977.

From Night Climbing in Cambridge: “As you pass round each pillar, the whole of your body except your hands and feet are over black emptiness.

“Your feet are on slabs of stone sloping downwards and outwards at an angle of about 35 degrees to the horizontal, your fingers and elbows making the most of a friction-hold against a vertical pillar, and the ground is precisely 100 feet directly below you. If you slip, you will still have three seconds to live.

In 1977, George Willig climbed the South Tower of the World Trade Center.

In 1980, Gripped’s co-founder David Smart climbed the exterior of the CN Tower using aid techniques with Gerry Banning. Smart wrote about it in his book A Youth Wasted Climbing.

In the 1980s, Dan Goodwin climbed many of the world’s tallest buildings, including the World Trade Center, the Sears Tower, the John Hancock Center, the CN Tower, and most recently (March 1, 2014) the Telephonica Building in Santiago, Chile for Stan Lee’s Superhumans.

In the 1990s and the following decade, Alain Robert became the world’s most famous builderer by free soloing high buildings all over the globe.

In 2007, buildering in Cambridge was featured in a detective novel by Jill Paton Walsh.

Between 2007 and 2011, several books on night climbing were published by Oleander Press, of Cambridge.

In 2011, they published an omnibus edition of the three Trinity guides, including an introduction by Richard Williams which reviewed the history of night climbing in Cambridge from the 18th century to the present day.

This introduction removed the cloak of anonymity that had previously protected the identities of the first nocturnal explorers.

From around 2008, buildering (also known as “roofing”) became popular amongst teenagers and young adults in eastern European countries including Russia and the Ukraine.

The identification of the first recreational or professional builderer remains an open question, but at Cambridge, Geoffrey Winthrop Young is generally regarded as the original pioneer.