Every climbing gym is different and the climbers who use them often reflect the culture of the place they’re in.

But one thing is guaranteed, in every gym you’ll find one or all of the following types of climbers.

This type of climber gives beta, a lot of beta, all of the time, to everyone and anyone. From across the gym, they’ll shout to someone they’ve never met, “Dude, move that right foot up, dude, your right foot.. UP!”

They’ll share with you how when they were on the climb, they only slipped once, not twice like you, because they bumped their left hand from the gaston to the side-pull before switching feet. Unlike you.

They’ll stop climbing their route next to the one you’re on to give you play-by-play beta of the holds above you. “Yep, then the next one looks good but not as good as it looks from down there, you got this,” they’ll say. “Now rest because that looks vicious until this hold right here. This one… this hold here.. look!”

A good rule of thumb is: If no one is asking for beta, don’t give any. 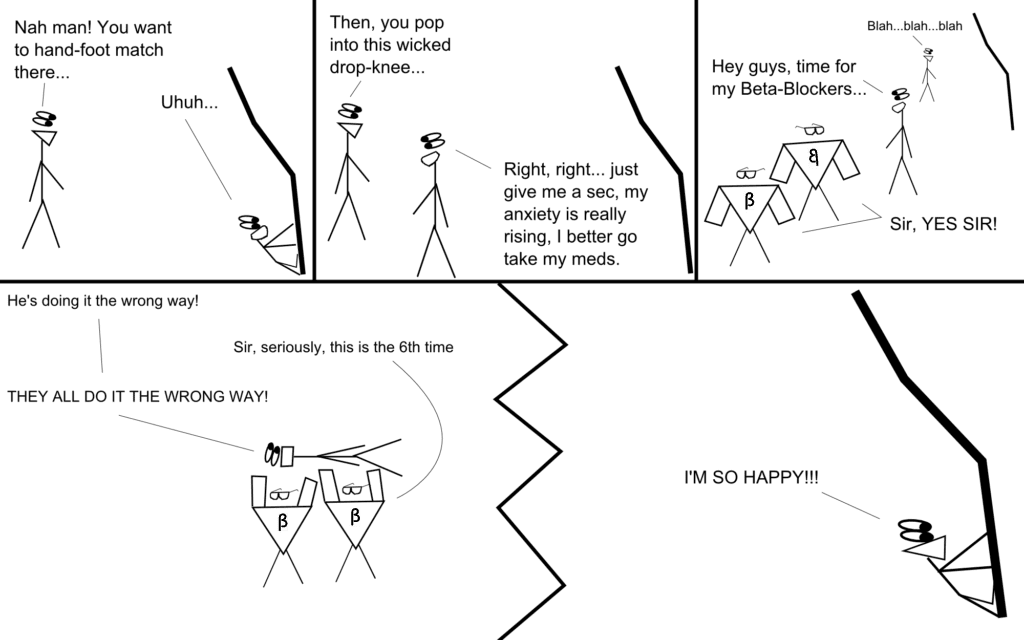 You don’t know who we’re talking about do you? That’s because they’re so quiet.

Those humble, no social media accounts, no look-at-me walk, no sticker-covered-nalgene climbers who modestly cruise all of your local gym’s hardest routes and problems without letting out a “Gah!”

Every gym has them, they’re the climbers who won’t read this and won’t care that we’re writing about them. They’re the off-the-grid 5.13+ crushers who travel with other quiet senders.

They’re the Sasquatches of the climbing world. We’ve all heard of them, but sightings are rare. Often sending right next to you, but you’re too worried about your clips to notice. The elusive silent sender. Send us a photo if you see one.

Climbing at their limit isn’t enough, they need to follow it up with 30 chin-ups and 50 push-ups.

Or maybe some big, dynamic stretching. They don’t see the climbing gym as a space for community to enjoy, but a club where they enter cage matches, against themselves.

No one discipline is enough, nothing will ever be enough. They biked to the gym after their swim which was after their run and pain doesn’t mean to rest, it means 50 more push-ups.

Cross trainers, we salute you, just don’t trip over our rope when you’re sprinting between climbs.

Most climbing gyms have dress codes and the ones that don’t are obvious.

Whether you like watching a sweaty dude, ripped or not, cranking on plywood and plastic with no shirt depends on who you are.

And in the world of how much skin you should show when wearing shorts or a shirt, well that’s up to you. And sometimes it depends on how hot it is inside the gym.

But one thing’s for sure, there’s always one or two people who wear significantly less clothing than others.

And to them, we say rock on. It’s best to wear what makes you climb at your best. For some it’s jeans and a T-shirt, for some it’s tights and a tank-top and for some it’s Euro shorts and no shirt.

Who could also be called the curser, the screamer, the uncalm crusher is the climber who climbs at their best when they’re climbing at their worst.

From big, dramatic whippers with lots of F-bombs to “take me, TAKE ME!” toprope moments, every gym has at least one flailer.

To succeed on a grade past your limit, you need to try, try and try again. But you don’t always need to invite everyone in the gym into your world.

But to flail with grace isn’t to fail, flailing as an attention-seeking loud flailer is to fail.

So flail with grace or don’t flail at all.

Belaying is the most important job a belayer can do. It’s more important than talking to other climbers, than texting or even talking on the phone.

Every gym has different belaying techniques and standards, but at the end of the day they all work. So learn the ones at the gym where you’re climbing to be sure you’re doing it right.

Watch this film from Petzl and don’t be a bad belayer.