Sometimes passions change. And the love we have changes with it. How do you step away from what makes you… you? 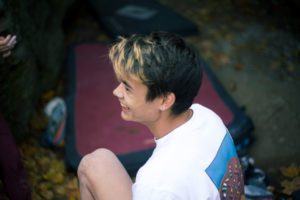 Lucas Uchida is a climber. He was born in Ontario, and he grew up in hole-in-the-wall climbing gyms that are becoming increasingly rare. When he began competing, the holds were made differently. The way competitions came together differed from what we know today. Being the best had a different connotation.

Like some of the greatest climbers in the world, Uchida entered his mid-twenties with nearly two decades of climbing experience. He competed all over the world and he dreamed the dreams shared by the world’s best competitors.

Last year, Uchida stepped onto the National scene after two years away from competition. Not only did he do well, but Uchida also won gold at both Canada-based North American Cup Series. He had his best Nationals performance in years and he came off of an impressive outdoor season where he completed almost all of the Niagara Glen’s hardest boulders. He did four of the hardest lines in southern Ontario in a single session. Then he moved.

Like many coming out of the pandemic, he felt a need to change. Uchida began west, climbing and setting at Bolder in Calgary, Alberta. Then he moved to B.C. He trained hard and saw results, never really settling. Coming up on the World Cups, he felt excited, but he also felt pressure: 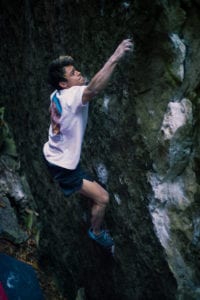 “To be honest, I was pretty happy with how I was performing. I was looking forward to the season. But a lot of the additional stresses started taking a toll on me. I feel like I had one of those moments… I started to ask bigger questions. Is this making me happy? Is this the pathway I want to continue down and invest more time in.”

“In the end, it was pretty obvious to me. It was time to pursue other things and to try and see what brings me the most happiness. At the moment, it’s trying hard outside.” After pursuing professional climbing for much of his young life, Uchida found the need for a digression.

After trying the professional route, Uchida embraced climbing for climbing’s sake. “I enjoy it. I’ve done it for a long time, and I built up all this experience. You know, I spent a lot of time thinking about what I’m interested in. And I think I have an idea of where I want to start.”

Uchida mentioned that trying hard outdoors was a part of his process toward happiness. His sessions in Squamish last year saw Uchida flash Shelter V13, and try, for the first time, what became his project: The Singularity.

The controversial boulder problem bares two grades and two starts. Tim Clifford originally established the line in 2007 with one hand on the sloping pinch and another on the obvious jug. Nalle Hukkataival became the first to repeat the climb nearly a decade later. He also became the first to do it matched from the low rail.

With conditions always proving difficult, Hukkataival walked away from his ascent finding the problem difficult to grade. Depending on conditions it could feel good at V14, but he also mentioned that it felt difficult for that difficulty as conditions are generally rough.

The problem revolves around five crucial holds, most of which are terrible. The start dish moves into a sloping pinch-crimp, before the climber attains a nasty little golf-ball hold, and crosses into an angle edge. The climber then comes out left and pulls to the finish.

If the climb were graded V14, it would be one of the least repeated V14s in the world. Uchida’s ascent is the fourth, and only the second from the more obvious dish start. When asked why he chose this start, Uchida reflected that he had been trying it from the jug start.

He said that he was trying it from Clifford’s start when Ontario’s Ethan Salvo walked into the Room. The Room is an area in Squamish that holds Room Service V12, it’s associated low start project, Dreamcatcher 5.14d, Silent Menace 5.14c, and The Singularity V14/15.

According to Uchida, Salvo saw his friend trying the problem from Clifford’s start and said “Do it from the bottom edge.” Uchida said he was annoyed at the time because he was tired of the first move.

“In retrospect,” Uchida said, “I’m glad I started from the ledge. Because there would always be afterwards like this question of like, should I have done it from the ledge? I always felt like, it was the most obvious place for me to start.”

Uchida said he could not comment on the grade. “I just don’t have any like basis to compare anything.”

With this problem done, Uchida has begun working through many of the area’s most classic boulder problems. With so many climbs in Squamish, Uchida has found solace in working the area classics ranging from Superfly to just about anything he thinks he can do in a day.

Lately, Uchida has reflected on this idea of mastery in climbing. “There’s so much to learn. It’s always exciting, and if it isn’t exciting, it just means that I have to go in a different direction and build again.” Uchida mentioned how much he still feels he has to learn in bouldering, and the infinite number of things he could still learn from trad or multi-pitch or any of the disciplines. It can always be climbed better.

Finally, Uchida reflected on his transition from a competitive focus through to an outdoor focus. He talked about the pressure we can put on ourselves in climbing and said, “It’s a pretty simple thing to say, but you can do whatever you want with it. There’s no reason to feel like trapped by climbing because it’s supposed to be this thing that makes you feel free.”