Sometimes you go out in the woods, send your project and return before anyone in your house knows the difference. Sometimes you need to top, but whip anyway.

What happens next? Maybe it’s the pressure of life or work, but something inside you recognizes that you could lie. One lie and the pressure’s gone. Getting close is basically a send anyway. It’s not pretty, but we have all thought it before. Some of us have done it. Imagine coming clean. Imagine coming clean if it meant a possible end to your career.

The project began back in October of 2019. Mad Rock athlete Nate Draughn tossed out an idea for a bouldering film that would catalogue his past struggles with addiction and his ultimate vindication. Ian Dzilenski of Dizzy Films was immediately psyched and the pair spent every night filming or editing until the release in early December.

The story follows Draughn, a wide-eyed boy from North Carolina, and his relationship with climbing. For Draughn, climbing is everything. He says, “climbing has given me friendship and an opportunity to reach out to others. Overall, it’s something to care about. When I was a kid it felt like there was a deadline to try and make it in the sport. Now, I just don’t care. I’ll lose everything before I quit climbing. Nothing else has ever given me the feeling of love like climbing does.”

It is almost difficult to believe that such a purist would have ever made the mistake of fibbing about a project, but perhaps it is through this path that Draughn achieved his clarity. The story harks back to 2011 with the release of an article from Dead Point Magazine. Dead Point Magazine was a staple of rock climbing back in the early 2000s and continues to influence the way climbing is discussed today. 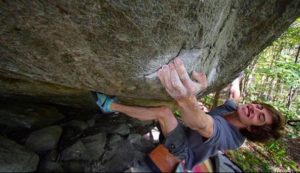 The article talked about a crusher from the Southeast that skipped V13 and fired off the Dave Graham test-piece Big Worm V14. The controversy was born out of a lie unwittingly promoted by the article. He hadn’t done it. This blasphemy was too much for Draughn and climbing hit the back burner for the next few years as he struggled with addiction.

Upset with the way he had been living his life, Draughn worked to make a change. After coming clean, he was back. Working with his buddy Taylor McNeill, the two Mad Rock athletes worked to reclaim the world of climbing Draughn had lost.

He wanted to return to the lies, the unsent projects of his past and right the wrongs. “I wanted to prove to myself that I could do them,” said Draughn. “When I first started climbing again, I never expected to be strong enough to do those boulders. Throughout this past year, each boulder I’ve done that I lied about has helped me heal that relationship with climbing.”

For Draughn, lying about projects was tough. He said, “It really eats at you. You start to feel a disconnect from the passion that you and your friends share for the sport. I had to be high to cope. I could not deal without using drugs to numb that feeling. If I got high enough, I could convince myself I had done the boulder.” 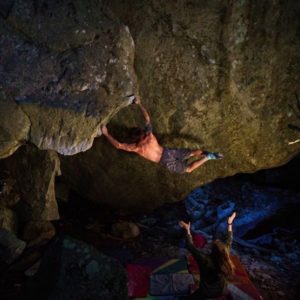 This feeling of disconnect is tough for any climber. Climbing is a sport of community and passion, a place where people come to find themselves. To lose that sense of belonging in a place that defines you is debilitating. Difficult to overcome. For Draughn, sending Big Worm for real in 2019 was that watermark moment.

“Doing Big Worm signified that what I was doing was working,” said Draughn. This film is a continuation of that principle. Draughn is not defeated, but instead a rock climber. Professional or otherwise is beside the point. Ultimately, climbing rocks is an individual’s experience. For Draughn, climbing is a pursuit of himself.

Many thanks to Nate Draughn and Ian Dzilenski for this production. Additional thanks to Mad Rock for supporting the film.