Skaha Bluffs Provincial Park is one of Canada’s most popular climbing areas, thanks to the excellent rock, long seasons, well-protected climbs, easy access and scenic views. And a recently opened parking lot along with some great new crags are a game changer.

If you’ve never been to Skaha, then you might not know that in 2007 the climber’s parking area, which was on private property, was closed. MEC stepped up and contributed $250,000 to help purchase land where a new parking area was built. You can be roped-up and climbing in the south end of Skaha within a few minutes of leaving your vehicle.

The south end of Skaha was the main focus for route development during the 1980s, 1990s and early 2000s. However, over the past decade, hundreds of new sport and trad routes have been added to bluffs at the north end of the park.

Thanks to the new parking lot, often called Evergreen Parking, climbers can now enjoy a short approach to the crags at the north end of the park, which are sometimes referred to as the Evergreen Drive Crags. There aren’t as many parking spots as the south end, so it’s recommended that you arrive early. From the parking, you can quickly access the following crags.

Canoe Buttress is a series of east-facing walls in a narrow canyon only a minute from Evergreen parking. This crag is worth a visit to tick some of the fun lines, such as Portage, a fun 5.10c established in 2019 by Rolf Ryback, and Voyageur, one of the best 5.9s in Skaha, bolted by Jon Jones in 2019. Jones, who’s established thousands of pitches in the Canadian Rockies and Skaha, continues to build routes to this day. 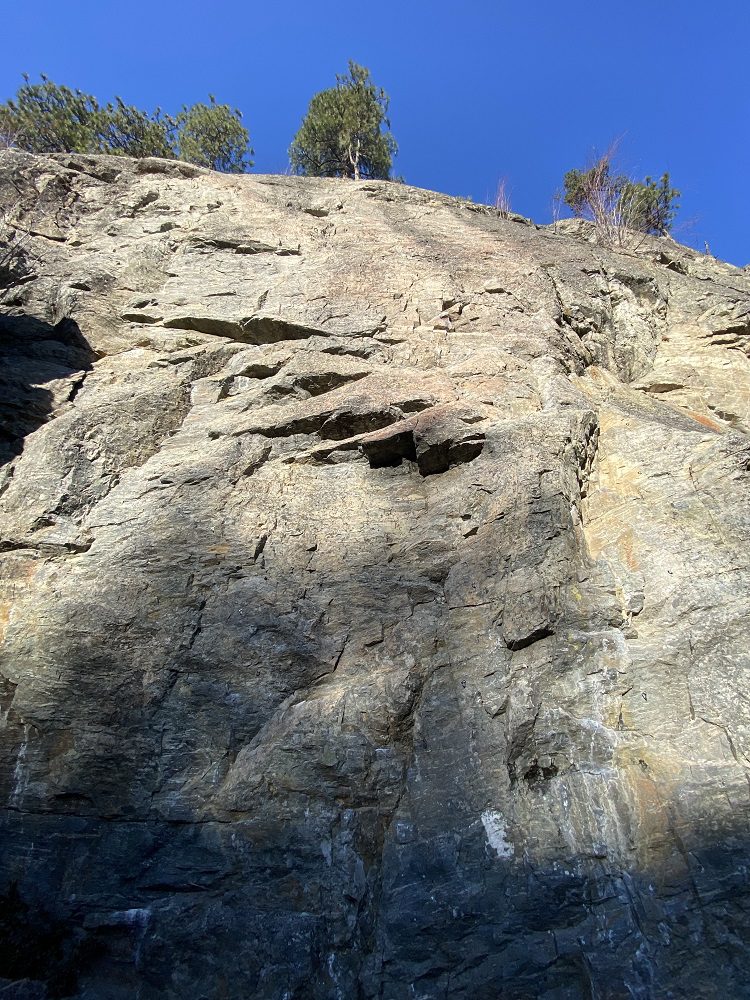 From Canoe Buttress, a series of trails take you south to more newly developed cliffs, like Foreplay. Like Great White wall in Skaha south, Foreplay sits high on a hill and catches the last sunlight of the day before sunset. This area can be subdivided into Reilly Rock, Terry’s Face, Shortcliff, Netherland and more, and has dozens of high-quality routes.

If you’re looking for one of the best 5.12a’s in Skaha, check out Back Hand of God. The main wall is 20 metres and overhangs slightly. One of Skaha’s most fun 5.10a/b’s is found on the right side of Foreplay with Another Pretty Face, which follows nine bolts past a short crux and was developed in 2014 by Ryback.

From Foreplay, you can follow trails east into a canyon and below the mighty Behemoth zone, which has a nice collection of 5.10 to 5.12 routes on a series of bluffs. There are still big undeveloped walls which are continually being worked on in this area. A few of the best lines include 60 Years On 5.11, No Loitering 5.11d and Get a Move On 5.12a, It’s Gotta Be A 12 5.12a and Movin On Up 5.12b.

In 2021, a new crag was bolted with a few short routes called The Proscenium (aka The Stage). The 16-metre high crag is on the southern end of Behemoth and there will be a total of five routes. The three completed by spring 2022 are Merchant of VenGneiss 5.10d/11a by Brian Bendig, School of Rock: A Rock Fest 5.11a by Alex Preissl and the fun Dawn Giovanni 5.11b by Bendig. It gets a lot of sun and the climbs are techy.

From Behemoth, a trail will take you to the fun Kids’ Cliff, which in itself is one of the best walls in Skaha for the range of grades it offers. The left side has stellar moderates and the right has crimpy 5.12s. There are some fun slot caves to explore when resting between burns. Be sure to climb Generation Gap 5.9 and ‘S Cool Wall 5.10b before hoping on the fun Powered by Ding Dongs 5.11a and Polaris 5.12c.

The Skaha guidebook has every route in the south and several in the north. The Skaha Bluffs Park Watch and Quickdraw Publishing have released an online pdf map with details on Evergreen Parking and the north end crags, which you can see here. And for new route updates visit here.