One of the first technical routes on The Chief from the was the South Gully in 1957 by Hank Mather and Jim Archer. Mather, from Munich, would become a leading force in Canadian climbing. In 1959, he made the first ascent of a steep route on the east face of Snowpatch Spire in the Bugaboos with Fred Beckey, Brian Greenwood and Elfrida Pigou.

They graded their new route up the South Gully at only 5.1 A1, but required a number of pitons, “hard hats” and bypassed large chocstones. They climbed the right fork and in 1961, Peter Crone and Ashlyn Armour-Brown repeated the gully, but via the left fork.

The following year saw Les MacDonald and Jim Baldwin make the first ascent of Peasant’s Route at 5.6 A1 at the base of the Grand Wall. They described the line as: “This route ascends the first left-facing diedre south of the base of the Grand Wall. Start about 50 feet further south and nail a diagonal crack which angles left into the diedre. Alternatively, start at the very bottom of the diedre and free to the outcome of the diagonal aid crack. Follow the diedre (free and aid) to a ledge about 200 feet off the ground. Descent is by rappel; two ropes are required. Time is four hours.”

They also said the “climb is bushy and not recommended” and to take 15 pitons up to two inches. They placed a number of bolts at a hanging station. The route wasn’t given much attention early, but after the first free ascent a few years later, it became a must-climb five-pitch 5.10c.

The final major route climbed in the 1950s was Squamish Buttress by Fred Beckey, Hank Mather and Dan Claunch at 5.6 A1. They climbed up a line of slabs and cracks on the Apron to the upper buttress.

Beckey referred to The Chief as Goose Rock. This was the first technical rock climb, except for the two gullies, from the bottom of The Chief to the top. The first free ascent of the now-classic six-pitch upper variation to any route on the Apron was in 1979 by Peter Charek and Joe Turley.

Beckey wrote the following about that summer in Squamish in the American Alpine Journal: “Goose Rock, Squamish, B. C. Destined to be the Yosemite of the Northwest, Goose Rock, at the head of Howe Sound, has been attracting rock climbers since the recent opening of the new road to Squamish. The west and north walls rise virtually from tidewater to 1900 feet in a sweep that is well over a half mile wide. The rock is granodiorite and despite moss and brush in some cracks, there are many sheer and clean walls. The rock is slabby in nature but holds are generally solid. There is an easy route for the descent on the south side via woods and a surveyor’s trail along the creek bordering the rock, but there is no easy face route up the rock. 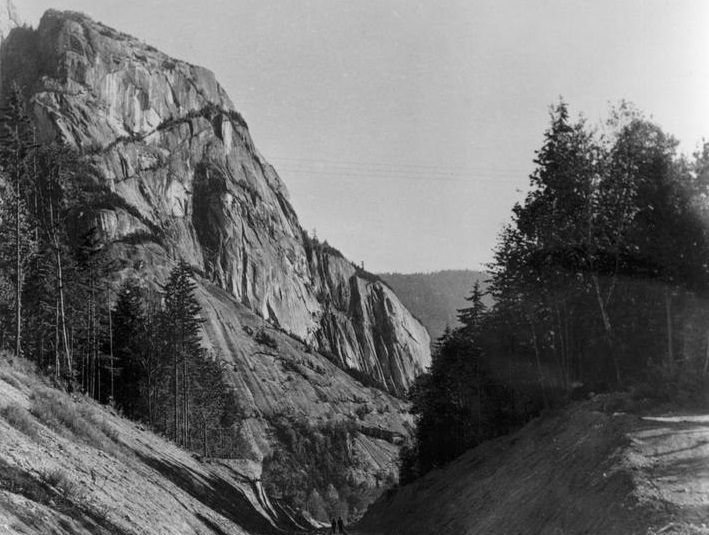 “The great central gully has two difficult pitches (one is partially sixth) but is otherwise scree or scrambling. The first complete wall route climbs the entire rounded ridge and the upper wall to the right of this central gully. On one May weekend we climbed the first thousand feet which was class 5 with the exception of a short overhang.

“The party, Fred Beckey, Don Claunch, and Hank Mather, returned to complete the route on a succeeding weekend. Aside from the culminating pitch, a 100-foot 6th class vertical wall that gives one a superb panorama of the Sound, the tugboats, the trains, and Mount Garibaldi, the climax of this original climb was the accidental eruption of a lunch fire into a fir-grove blaze on a ledge of the upper cliffs. The party spent well over an hour extinguishing the blaze, though it took that night’s rain to stop the smoke. There are further route possibilities, some of which will take two or three days to complete.”

About Beckey calling The Chief Goose Rock, Ed Cooper said in an Alpinist article about Squamish here: “At that time, Fred referred to The Chief as ‘Goose Rock,’ a very inelegant name for such a great formation. I have no idea how this nomenclature originated.”

The 1950s closed out with a growing interest in Squamish climbing. The smaller cliffs around The Chief were being used as practice for the big walls and would soon prove to be world-famous crags. The next decade brought The Chief to the world stage.