Home > Profiles
Gripped Magazine August 18, 2014
Share on Twitter Share on Facebook Share on Email Share on SMS
Climbing community starting to show support of deceased climber Denali Schmidt’s art campaign on Kickstarter
International — August 18, 2014 — When Denali Schmidt was killed in an avalanche with his mountaineer father last year on K2, the second-tallest peak in the world, he left behind an array of artwork in a San Francisco storage unit.
Schmidt, an avid mountain climber, created paintings and installations inspired by mountaineering and climbing. That artwork will go on display in an international touring exhibit titled “Peak Inspirations” if a newly launched Kickstarter campaign is successful. The Peak Inspirations exhibit will meld the two worlds of art and adventure, allowing the public to experience the natural beauty and sheer power of the mountains through Schmidt’s artistic creations.
The climbing community is starting to gather their support for the Peak Inspirations exhibit.
Ueli Steck, a Swiss rock climber and mountaineer, who many have labelled a “game changer” in the mountaineering community. Shared his thoughts of the artwork of Denali Schmidt, from a mountaineers prospective:
“They are abstract, which reflects the kind beauty of the mountains. Climbing itself, is similar. Climbing is beautiful but a lot of the time, not. Its cold, its dangerous, Why are we doing this? There is no real reason to climb mountains…? But we are doing it because we feel alive out there! There is a lot more behind these great paintings, its not only colour on paper.”
–Ueli Steck
Steck has joined the likes of Peter Hillary, the son of Sir Edmund Hillary, in expressing his thoughts on the Art work of Denali Schmidt.
“In his short life Denali shared his love of extreme alpinism with his father and here in death is his artistic legacy; a portrayal of life at the sharp-end. The works are an expression of these profound experiences and provide a glimpse of human frailty before the wrath of the mighty mountains and the weather gods he liked to engage with. Climb on!”
– Peter Hillary
The Peak Inspirations exhibit will only take place if the Kickstarter campaign is successfully funded. The campaign to fund the exhibit was organized by the Denali Foundation, a group of artists and professionals, including Schmidt’s sister Sequoia Di Angelo, who hope to raise $330,000 by Sunday, September 21st to tour Schmidt’s artwork in eight cities in five different countries.
The “Peak Inspirations” exhibit will start in San Francisco, where Schmidt graduated from the California College of the Arts, and will end in Wellington, New Zealand. Each location that the exhibit will show in holds a special significance in Schmidt’s life.
The Kickstarter campaign’s link is here.
Learn more about the campaign and Schmidt’s work. 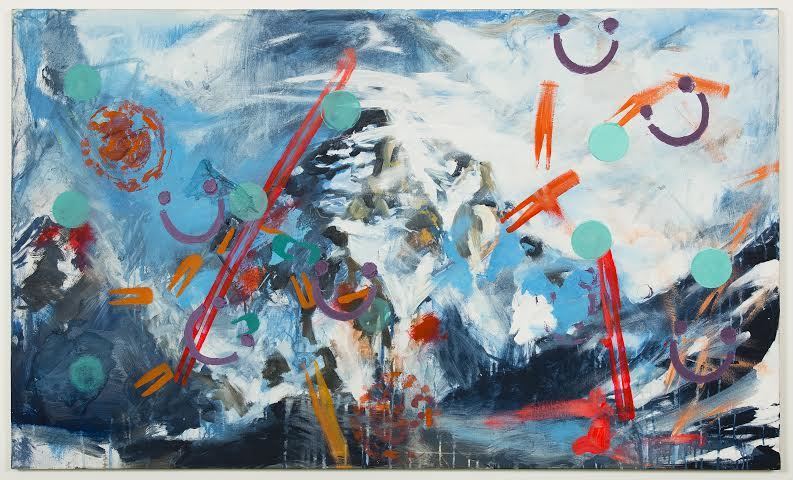