Katie Brown’s contribution Valley of Giants, Stories from Women at the Heart of Yosemite Climbing goes by the prosaic title “A Good Day.” Her account of an onsight of the classic Northwest Face of Half Dome has her reconstruct her inner narrative as unassuming motivation that shed its carapace to become determined execution pitch after committed pitch.

We’re there with her as she digs deep to summon an exit sequence that gives her the most special day of her life. Surely a day not given; but extracted with everything she had. This sense of contingency gives this story its power, as it does with all the forty-some other accounts. Some telling of a single day out, others recounting weeks, months, or years.

I chose to be here, on the steepest granite faces the planet has to offer.  I chose to train to be able to climb at the highest levels of difficulty and engagement. I immersed myself in a community, drew from its strength, and took it further.

These are some of the personal threads that run through every entry of a book that spans a century of adventure in the crucible of rock-climbing accomplishment, from the first all-female ascents of the Captain to solo aid on modern A5 to speed enchainments to rarefied free climbs on the most prominent routes.

Lauren DeLaunay Miller’s work brings women’s stories to their rightful place, front and centre of the literary canon of Yosemite Valley – a place violently wrought from its Indigenous inhabitants by manifest destiny America as well as a place made dense with lore by successive generations of climbers. Those began with the outing clubs of Stanford and Berkeley, places of both relative privilege and female advancement.

Miller digs deep into history to capture the ethos of successive decades that gave us “the golden age,” the Stonemasters and the Stone Monkeys. All told, Valley of Giants brings out the aspects of the climbing life that separate it from more quotidian pursuits: washing wounds in public bathrooms, waiting for the stars to turn on a hanging belay, wanting to avoid contact with a tragic fate.

One might also add: waitressing to fund another season, concealment camping, and establishing immutable bonds of friendship. Postscripts give a sense of what each contributor went on to accomplish and how they look back on their adventures in Yosemite. The book is arranged into distinct chronological periods, each reflecting new attitudes and social horizons. Women absorbed and contributed to the evolution of styles and techniques in the Valley, including the use of clean protection (revolutionary in the words of Liz Robbins), the relentless drive to see 5.14 become a trad grade (all-consuming for Beth Rodden), and the conviction to free The Nose for the first time (as Lynn Hill did in 1993).

“If you don’t like it, you can come back to Berkeley, give plasma, and collect food stamps again.” Uh, no! With that, the next chapter began, writes Sally Moser, recounting her arrival to the Valley in 1975. It’s these anecdotes that give Valley of the Giants its power to inspire anyone, anywhere who knows that their expected place in life is not where they want to be.

We got a chance to catch up with DeLaunay Miller and asked her a few questions.

Why did you choose to write about women’s climbing history in Yosemite now?

The timing was right. A lot of the climbers from the 1960s and 1970s are aging, so now is an important time to get some of their stories written down. I was really curious. There was a lot published about the period from 1970s on, especially with well-known names, so I focused on early stuff. There really wasn’t a lot out there, so little was published.

To what degree were women underrepresented in the historical record?

A lot. They were super involved in climbing. Some climbing clubs had more women than men. Women’s climbing was really a big deal, but much of it was stuff I hadn’t heard about. This is partly because there was less narrative record keeping and more first ascent record keeping. lt also happened at a time when it took longer for women to be certified by the park service as leaders, not because of an official ban, but clubs had their own processes for certifying leaders and usually didn’t envision women in that space or put them forward to the park. Women following on climbs was an extension of women’s roles in society as a follower of men, but someone has to be a follower on a climb. That started changing and as women led, other women wanted to as well.

Why did you decide to do an anthology?

Everyone’s story was different. A lot of people thought it was a great idea but they were unworthy, they hadn’t climbed hard enough, so I had to do some community building to get some of the stories. Overall, there was a really positive reaction to setting out to record history before stories were lost to time

What’s next for you as an author?

People are reading the stories, it’s been really amazing. I love the slide shows and talking to people who have been asking questions. It’s super inspiring. Now I’m in grad school in investigative journalism at the University of Berkeley. I’m trying out different ways of telling the stories of other groups of underrepresented people.

Valley of Giants: Stories from women at the heart of Yosemite climbing, Edited by Lauren DeLaunay Miller, Mountaineers Books, 2022 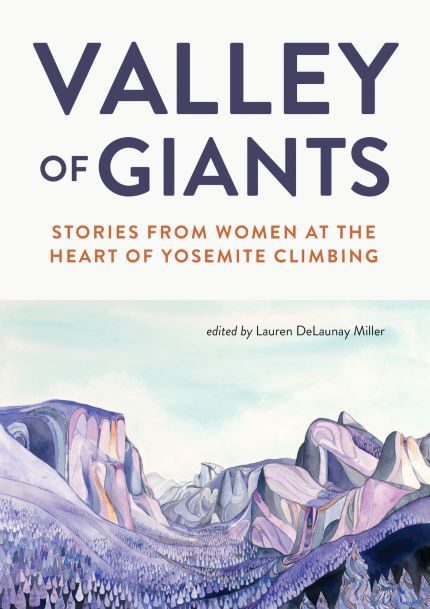