Brent Nixon and Lisa Newhook have completed a new eight-pitch bolted 5.10a called Where’s the Remote in Marble Canyon, B.C., close to the 19-pitch The Goat 5.9. The following was written by Newhook and Nixon.

Prelude: Brent and I went to Marble Canyon one weekend in April of 2019 with the intention of bolting a new route on the lower wall. The Goat had been established as a new 19 pitch 5.9, but not much else was very accessible – or known in the area – that would attract more traffic to this limestone face. We finished up the first day of our weekend with an ascent of the Goat and quested off the next day to find some unclimbed rock to claim as our own.

As we walked along the lower apron, we came across an arete that looked enticing: perfect, compact grey limestone with no signs of previous climbing exploits. We donned the heavy bolting gear that we laboriously carried up to the bottom of the cliff, tied into each end of the rope, and Brent set off into the unknown while bolting on lead.

@lisanewhook and I finished our new route this weekend in Marble Canyon, Where’s the Remote? Eight pitches lead up, over varied terrain, to the top of the lower wall. Rap from any pitch with a single 60m rope. Topo to come! In this photo @stone_marmot climbs through a bulge on pitch 8. Big shout out to Kate and Sean for helping to scale loose rock and garden the ledges! #marblecanyonbc #multipitchclimbing #beautifulbc #sportclimbing #climbing #climbingislife #airbornerectalsyringe #trundlemagazine #newroute #lillooet #fuelupproteinbar

The first bolt sunk in like butter, forever embedded in the rock. Brent continued on to the next stance, lined up the drill, and fired away. When it came time to hammer in the second bolt, it got stuck half way in and wouldn’t budge, so he tried again a little higher to no avail – Brent’s hammer wasn’t heavy enough to do the job. Now the rock was marred with two bolts that couldn’t be used as any sort of safety.

After an expensive trip to Home Depot, we returned on Victoria Day weekend to finish (read: fix) the job. With a bigger hammer, we managed to convince one of the bolts to go in the rock while the other bolt submitted under the forceful blows of the new hammer and a cold chisel.

We finally had traction on the route, steadily forging on until we had the first four pitches behind us. Knowing that only time was between us and finishing our project, we started to think of a name as we returned to the truck to enjoy a cold brew. All sweaty and sticky, I reached into the cooler to grab an American Pale Ale from Brassneck Brewing.

I cracked the can to an explosion of pink, frothy foam, which alerted me to the fact that this was not the beer we had bought. After a sip, my taste buds told me that indeed this was a tart ale, and not the crisp, hoppy ale we were anticipating. Although confused (and slightly dismayed), the name of our route – in honour of its namesake brew – became clear: Where’s the Remote?

We hope you enjoy it as much as we enjoyed the process!

This weekend @brentnixon and I started bolting “Where’s the Remote? (Ya Sour Tart?)”, ~8-9 pitches at approx. 5.9 in Marble Canyon. Topo to come, we just gotta finish the route! I do, however, promise the climbing will be worth the drive, especially if you pair it with an ascent of The Goat (19 pitches, 5.9, bolted by @danny.ofarrell and friends) in the same trip. Backstory to the name: @brassneckbrew has a fantastic American Pale Ale called “Where’s the Remote”. Brent and I finished up the first day expecting to return to the truck and down this icy cold beer on the tailgate after a long, hard day of drilling rock, brushing dirt, and overall sweating our asses off. When we cracked the can open, not only did I manage to spray beer everywhere (sorry Brent), but we also discovered that the contents of the can were not the expected yellow-gold pale ale, but rather a pink, tart brew!! @brassneckbrew, maybe you could enlighten us to as what we might have drank instead? . . . . . . . @vancouver.mtn.guides @fuelupproteinbar #wherestheremote#bolting#routefinding#explorebc#getoutside#wallsaremeantforclimbing#beautifulbc#fuelup#adventureclimbing#rockclimbing#sportclimbing#multipitch#exploretheunknown#multipitchclimbing#whatsinyourbackyard#fuelupproteinbar#marblecanyon#limestone#firstascent#newroute#adventure#beautifulbritishcolumbia

Approach: Park at the gravel pullout on the lake side of the highway a few hundred meters west of the Marble Canyon parking lot and campsite. Cross the highway and follow a well-defined trail behind a speed limit sign for 15 minutes up to the wall (turns into a scree-slope). Head climber’s right along base of wall, 50m down and right, passing the start of Sisyphus to a bolted arete behind a large tree.
Pitch one: Start 15m down and right of Sisyphus on a bolted arete. Climb the arete (stay on arete) past 6 bolts to a two-bolt anchor on a small ledge (5.8 22m, 6 bolts).
Pitch two: Scramble up a 4th class slab to another two-bolt anchor on the wall beside a large, coniferous tree.
Pitch three: Begin left of anchor. Climb up to first bolt, then diagonally up right to an arete. Follow arete upward to ledge with a dead tree and two-bolt anchor. 22m, 6 bolts.
Option to link pitch 2 into pitch 3. Use some long slings to avoid rope drag (5.7 40m, 6 bolts).
Pitch four: Step right from belay, then climb upward to the arete passing two bolts. At the steep wall, clip a high bolt on the left and reach for a jug. Pull up onto the face, then step gingerly left to the arete. Follow the arete past a tree with a cordalette to a two-bolt anchor (5.9 35m, 8 bolts). Move belay 15m up left to a single bolt belay at the bottom of the slab.
Pitch five: Climb straight up the pocketed slab to a two-bolt anchor (5.7 35m, 8 bolts).
Pitch six: Traverse right past a high bolt in the wall to a left-facing corner. Climb up the corner, trending right past three bolts to a good ledge with two-bolt anchor. 20m, 4 bolts. Option to link pitch 5 and pitch 6 (5.6 55m, 12 bolts).
Pitch seven: Climb up and right from the belay to a bolt. Follow bolts as they meander up though interesting features to a two-bolt anchor on a ledge (5.10a 40m, 13 bolts).
Pitch eight: Climb up directly above anchor into a groove. Trend leftward along a crack feature up to a small, overhanging bulge. Pull left over the bottom of the bulge, then up to the arete. Follow arete diagonally rightward to two-bolt anchor (5.9 35m, 11 bolts). Rappel the route from here or continue to the large, treed terrace. A tree with a cordalette on the terrace will allow you to get back to the last bolted anchor.
Descent: Rappel the route from any pitch with a 60m rope. From the top of pitch 7, rappel skier’s right to a separate rap anchor on the wall at a small ledge. From there, rappel to the top of pitch 5. Rappel skier’s left from the top of pitch 5 to make it to the mid-route terrace (careful, it’s a rope-stretcher). From the top of pitch 4, make a short rappel to the tree with a cordalette then continue down the route. From the top of pitch 2, a single 60m rope will get you skier’s right to a small ledge 1m off the ground (again, careful, it’s a rope-stretcher). 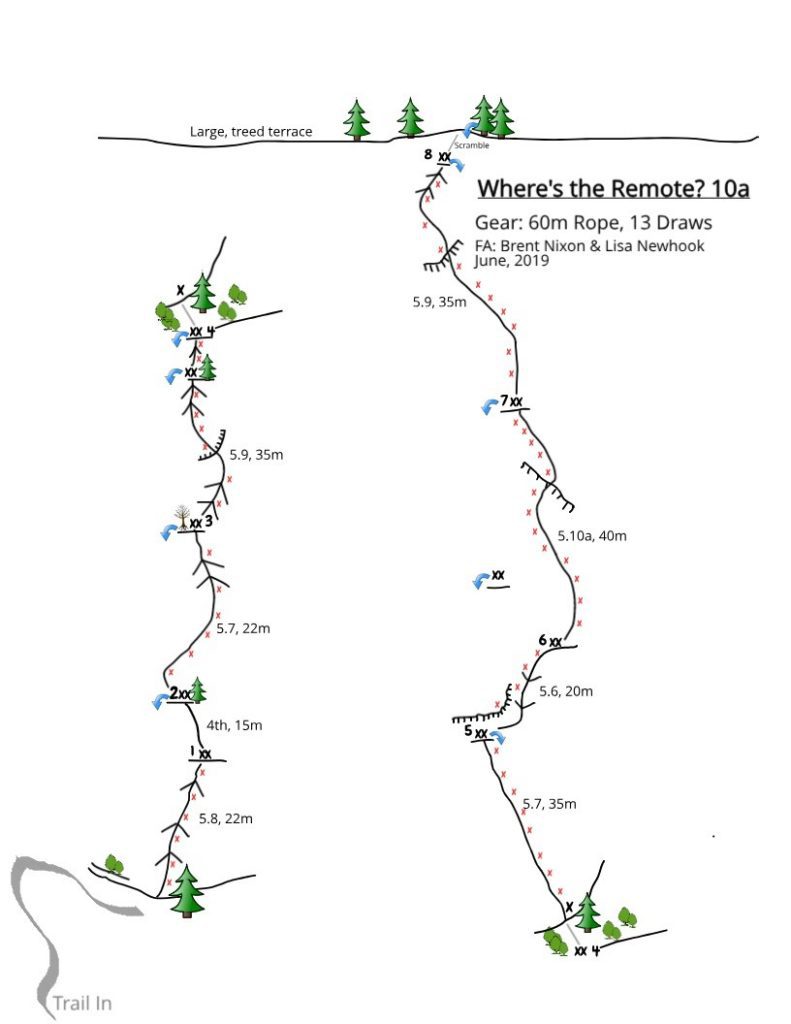