Katie Ives’s new book builds an exploration of the role of imaginary, fantastic and metaphorical mountains around the 1962 attempt to pass off a picture of Alaska’s Kichatna Spires as the fictional Riesenstein Range of British Columbia. 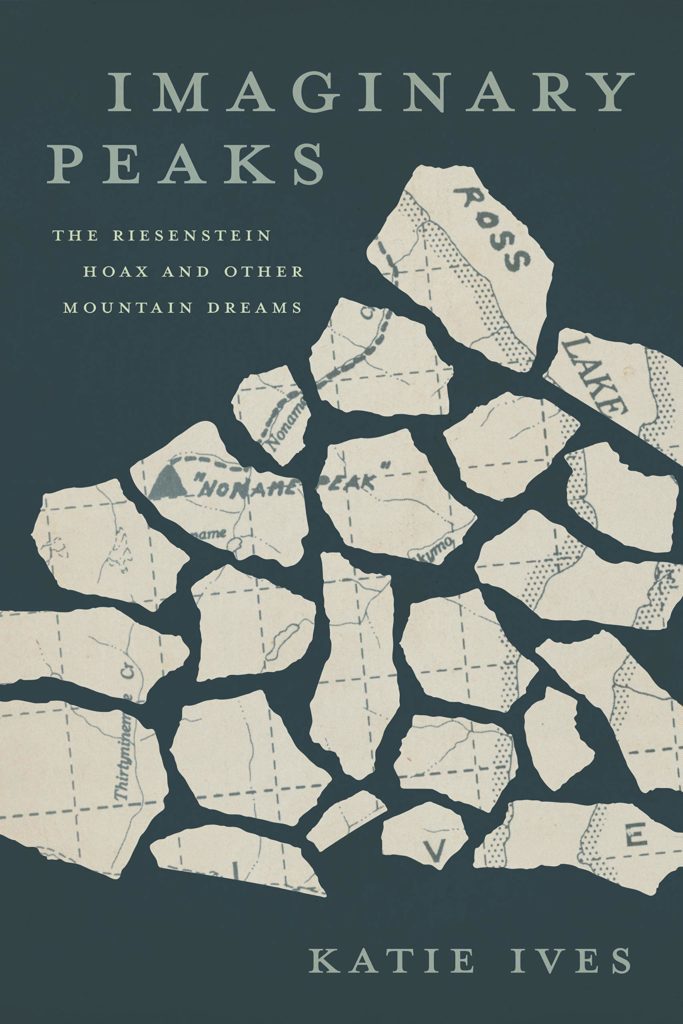 “The Riesenstein,” says Ives, “was only one range among countless nonexistent mountains that have appeared for centuries: ghosts of legendary peaks eliminated from modern maps, implausibly high summits that turned out to be much lower than cartographers once believed, invisible outlines of sacred towers that transcend any ordinary notions of geography, and the ideal spire that persists in many climbers’ minds, the one that glows ever farther in the distance, reflecting a vague longing that no attained summit ever fulfills.”

Ives distinguishes between untruths reported to aggrandize the claimants and the more complex overlaps between the imagination and mountains that underlie our impulse for high adventure. Naturally, it’s a subtle distinction, but she is well equipped to make it with research and learning that are both ambitious and extensive. For a single source, Ives had access to 125 boxes of personal papers.

Ives considers the Riesenstein hoax through the lenses of imaginary and real mountain ascents in ancient China, medieval Europe, and modern works, including, of course, lots of climbing literature. Sections read like climbing’s answer to The Golden Bough, dense with proofs and hints of a great code linking the imagination to adventure. Ives likely found herself, like the author of that book, embarked on a journey of a far greater magnitude than she had at first conceived. It’s thrilling to accompany Ives on this odyssey through real and imaginary mountain lore, but the first-person narration and interludes of levity make her discourse warm, accessible and sometimes funny. The book is full of touching human detail from the personal lives of climbers and dreamers.

Predictably, given her position as the editor-in-chief of Alpinist magazine, her understanding of Alaskan and northwest U.S. climbing is detailed and extensive. So is her knowledge of mis-endeavor on and off the heights. We learn about what happened after a famous Vulgarian car-tipping. There are comments by famous climbers, (notably American mountaineer Fred Beckey) that seem to have been made in their candid moments.

The poignancy of the work derives partly from its deep personal meaning for the author. Near her conclusion, Ives writes, “Since childhood, I’ve wandered up and down knobby ridgelines that vanish into mist, or traversed along narrow ledges and broken staircases that spiral up ancient tower walls. I’ve never arrived at a final high point, though I’ve met many other seekers and learned of endless, untold quests. Once you begin to look for imaginary peaks, you start to see them everywhere.”

Get the book from Mountaineers Books and learn more about it from the author on Dec. 9, when American climber and writer Pete Takeda interviews Ives live at an online event sponsored by the American Alpine Club.