I’ve been visiting Squamish for 20 years, have lived there and worked at the Vancouver Olympics in 2010, but I’d never hiked Mount Harvey. In fact, before this year, I didn’t even know Harvey was the name given to this peak, which is quite striking from the right angle.

The hikeable summit is a must-do in the North Shore mountains, although it’s less visited other mountain in the range. It’s located on the Howe Sound Crest Trail in Cypress Provincial Park and is reachable via the trat trail or by its own trailhead in Lions Bay. It’s the same trail used for The Lions, Brunswick Mountain and Mount Hanover. 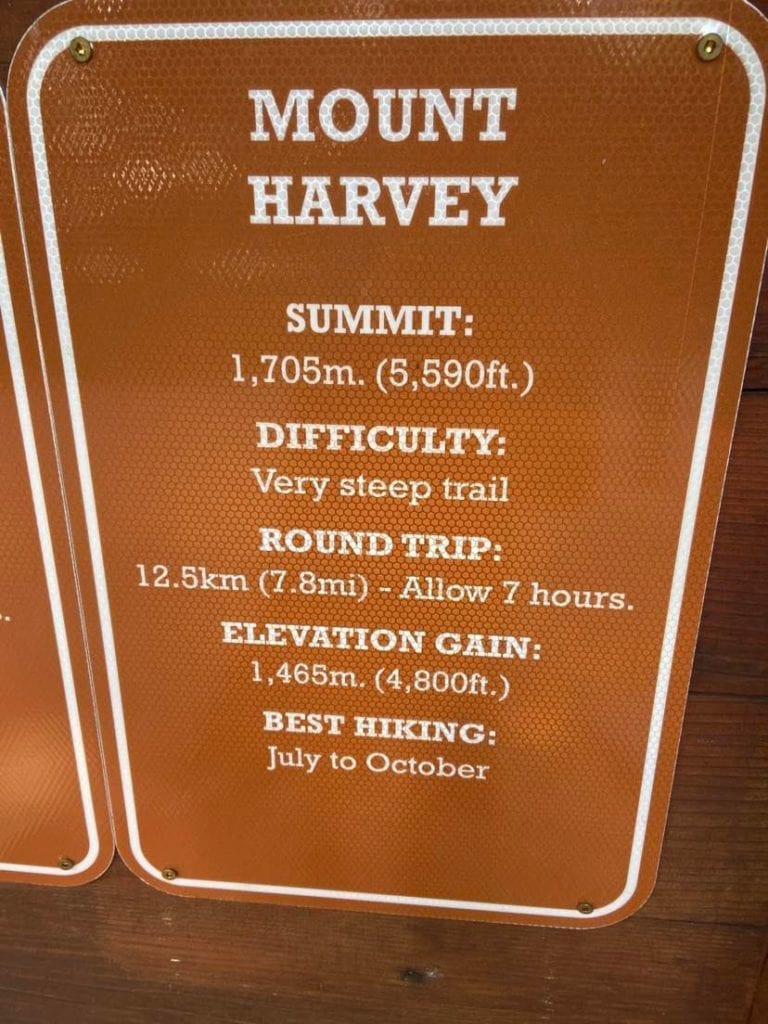 There are no trail use fees, parking fees or camping fees, but you want to arrive early because it fills up. It’s a steep hill to get up to the parking, so have good breaks… because I did not.

I arrived in the afternoon with a stormy forecast on the horizon. It was a hot July day with fast-moving clouds skipping between mountain tops.

The description on All Trails says: “A llightly trafficked out and back trail located near Lions Bay that offers the chance to see wildlife and is rated as difficult. The trail is primarily used for hiking and running and is best used from July until October.”

One person who had just hiked the trail, said, “Oh wow. Okay, my legs don’t work anymore. This trail was brutal! I’m not in my best shape ever, but I’m definitely active and would say I’m a pretty average fitness level. Mount Harvey was an unrelenting beast. Just when you think it can’t get any steeper, it does. You think you’re pretty good on a stair master at the gym-don’t be fooled! Just when you think you’re nearing the top, you realize you’re barely halfway, and have to do all that hard work you just did one more time!”

The trail climbs 1,465 metres of elevation and covers 12.5 kilometres out-and-back with an average time of six/seven hours car-to-car.

The initial switchbacks follow a wide path up an old forestry road. You pass tall trees, can’t see the peaks or ocean below, but can move quickly on the soft ground. It wasn’t muddy, but I could see how after heavy rains your feet would be in mush.

Once you turn left up the Harvey trail, you’re met with some in-your-face single-track where you’ll benefit from pulling on tree branches and trunks. The trail winds straight up on easy-to-balance-on terrain to a long switchback left and then right.

The mosquitoes were hungry and slightly nightmarish around where the ground was moistest. I never put bug spray on, but if I had any on me I wouldn’ve doused myself from head to toe.

The trail is very steep in sections and I can see how it trashes people’s legs. I’m lucky that alpine and rock climbing forces me up monster approaches with a heavy pack, so going without a pack is a nice change that speeds things up.

I couldn’t find an indigenous name for this peak or the range, but if you know of one please inform me. Like Brunswick, a nearby and slightly higher at 1,249 m peak, Harvey was named is associated with the marine battle of 1794 known as the Glorious First of June.

The names were chosen by Captain Richards of HMS Plumper during his survey of the region in 1859. John Harvey (1740–1794) was the captain of HMS Brunswick and lost a limb in that battle, dying from complications soon afterward.

After the steepest section of the trail, you pop into the alpine on a rocky ridge from where you can see The Lions. From there, you scramble along a crest with some steep drops on both side to the main summit.

The trail is easy to follow and never too difficult if you have any experience on rocky ridges. The up took an hour and the down took 40 minutes. Move quick, watch for roots and use the trees to re-direct yourself when your pace picks up.

The summit views are incredible and will bring me back next time I’m in the Sea to Sky area.

I went uber light because it was hot and there were no technical difficulties. For shoes I wore Black Diamond Sessions, which I’ve been using for most adventures this summer. They’re soft, comfortable, breathe well and edge on rock. My pack was a Patagonia Nine Trails, which at 20 litres was a good size to fit a layer and buckets of water. I left the bear spray in the car because of how crowded the area was. Phone photos from an iPhone 11.

About Adventures with B: My late friend Anna Smith, who lost her life Himalayan climbing, once said to me after an epic we had in Chamonix, where we got away unscathed: “Adventures with B are messy and unplanned but always fun.” This column will focus on skiing, hiking, SUPing, paddling, fishing and other adventures. A new alpine climb in 2020 was named in Anna’s honour, read about it here.