After a few weeks of training, you are finally able to do it. Locking off, you campus smoothly between the jugs in your gym and feel ready to move onto something more advanced. There it stands, the campus board. Perfectly cut Tension rungs stare you down from the other side of the gym. It’s intimidating, but you’re not afraid. You have come equipped with four exercises for the board. 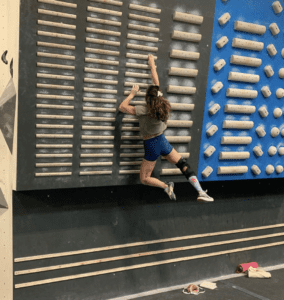 This exercise has been a favourite among climbers since the board’s invention. For the novice, this exercise is what you have most likely seen in the gym. It is a process by which the athlete alternates hands as they campus. Similar to the “alternating holds” exercise described here, the focus of this exercise is to move smoothly.

For this exercise, as well as the other exercises in this list, use the thickest rungs at your disposal. Thicker rungs should reduce your chance of injury and make for a more enjoyable training cycle. The exercise should be completed at the beginning of your session, after you have warmed up. As this exercise is high stress it does not require an excessive amount of repetition.

To complete a set, lead with your left hand, alternating rungs on the way to the top. After you drop, rest for two minutes, and then repeat the movement leading with your right hand. Leading left and leading right will equal one set. Complete five sets. As you strengthen, this exercise will become easy. If it loses its value, begin skipping rungs to increase your power.

For the climber that wishes to increase the maximum distance they can bump, this exercise is crucial. A “bump” in climbing is a move where the climber leaves a hold with one hand and moves it to another before moving it once again to a third. In some ways, it is best described by the climber that seeks to complete as many moves as possible with the movement of a single hand.

On the campus board, this is much the same. Begin matched on a low rung. Pull and catch the next highest rung. Repeat this step until you can no longer bump your leading hand any further. The goal of this exercise is to bring the leading hand as high and as far from the lower hand as possible.

This is done to increase the stability of the shoulder, wrist and elbow of the lower hand. It is also done to improve the power of the pushing, or lower, hand when in a semi-locked position. As with alternating rungs, complete five sets of this exercise at the beginning of your session.

If this proves too challenging at first, or you are specifically looking to strengthen your ability to pull through the higher rung, place one hand a few rungs above the lower hand. Once in position, complete three to five pull ups. These “offset” pull ups will greatly help with most campus board exercises. Complete three sets with a high right hand and three with a high left.

This is where the campus board begins to get tough. Difficulty is relative, but doubles require the climber to work on both power and coordination. As the name suggests, doubles require the simultaneous use of both hands. Like little forearm jumps, the doubling climber will effectively double-clutch from a low rung to a higher rung with both hands at the same time. Ideally, you will have rounded jugs when you are trying this for the first time. If such rungs are not available to you, simply ensure that you are proficient at the alternating rungs exercise. Proficiency could be described by smoothness while skipping two rungs a pull.

This exercise requires an intense amount of contact strength, but do not be dissuaded. Its applicability to indoor and outdoor climbing is high, though the learning curve is steep. The main difficulty the first-time doubler will face likely relates to coordination. Do not worry. This is why the exercise is useful. Repeatedly training hand-eye coordination will allow for quick progression as your body normalizes to the exercise.

Complete between five and ten sets of whatever your limit might be. Even if that is just doubling a single rung and resting between sets, improvement will occur. If you are unable to double, try doubling the starting rung. This is to say, pull up hard enough to release both hands from the starting rung and then catch that same starting rung. If this is also too challenging, stand before the board and jump onto the rungs with two hands at a time.

This exercise is the most challenging of all of the listed campus exercises. Begin with one hand on a rung and the other on a higher rung. The rungs should be adjacent. Imagine that your right hand is on the higher rung while your left is on the lower rung. You pull up and release both hands from the board in a double-clutch-like fashion. Instead of going up the board, switch hands on the original starting rungs. As your right hand was previously on top, it will be replaced by your left hand, while your right drops to the lower rung from which your left hand originated.

As with doubling, coordination will likely be the most challenging aspect of this exercise. If you are unable to catch the switches, stand before the board and jump with the intent of catching the rungs in a split hand position. Catching with a high left and catching with a high right make up a rep. Aim to complete three reps in a set. Rest between two and five minutes between sets with a goal of completing three to five sets.

Thanks to @alexanderzoltai for featured image of Kyra Condie