You have found yourself a deadly-looking hangboard. Your hands are chalked and the board is mounted, but what are you supposed to do? Sure, hanging from edges seems easy enough, but how do you maximize your gains? What is the correct way to hang? What options do you have?

For International Grip Strength Champion Yves Gravelle, the “rule for training specific hand positions is if you use it in your climbing you should train it.” For Gravelle, the style of the climb dictates the position. But what are the positions? What sorts of strengths are out there?

Break-down complete, we can begin to understand finger strength as a concept. For example, when can a person begin to hangboard? Gravelle says that, “it really depends on the individual. I would recommend starting finger training once you can conformably climb V4. Before reaching this level, you can get more benefits from climbing and focusing on technique.” This is important to keep in mind as the hangboard can cause issues if attempted too early in strength training. Gravelle also notes that “consistency in training is very important to measure progress. Keep the training simple and write everything in a training log. This will help create good training habits.”

Training on thin edges has long been a favourite. Built around hanging progressively smaller holds, minimum edge training requires a little bit of masochism and a lot of will power. In Gravelle’s opinion, “there’s no reason to add extreme weight. If you can do a deadhang for more than eight to nine seconds with 25 pounds, you’re ready to move to smaller holds.” For those looking to move to extremely small holds, eight to four millimetres, Gravelle says that “the secret is really skin!” Thick skin allows the climber less sensitive tips and a thicker base to hang from.

For Gravelle, “one arm hangs are great for elite level climbers.  It’s just another way to increase intensity without having to haul a ridiculous amount of weight.” These hangs require “very strong stabilizing muscles in the shoulders to prevent rotation” as well as strong fingers. As such, these hangs can be exceptionally useful. According to 99 Boulders hanging 18mm with one arm is the only metric that has “a strong correlation with the ability to boulder 8A (V11).” 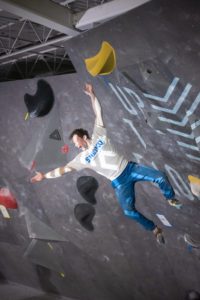 (Photo by Will Johnson)

There are a million-and-one methods for to hangboard, but these are a few that are accessible.