At 20-years-old, Team USA’s Brooke Raboutou is one of the most well-known names in the sport. She is an Adidas Terrex athlete and a staple of American climbing. From a young age, Raboutou made headlines and appeared in climbing footage, becoming representative of her generation of competitive climbers.

Still, even among life-long rock climbers, Raboutou’s introduction to the sport differs from most. At two-years old, she began what has become a lifelong passion. At the age of nine, she became the youngest female to send V10, and at 11, the youngest to climb 5.14b. By the time Raboutou entered into the adult circuit, she had spent over a decade on rock. Much like competitors 10-years her senior, Raboutou grew up on an older style of setting and in a more old-school community.

The Colorado-local climbed alongside many of the best climbers in the world at a time when Boulder was the hub of climbing performance in the United States. Although Raboutou has long been considered strong by Americans, it is easy to forget just how far she came over these last two-years.

These results accompanied a breakout World Cup season where Raboutou earned three medals despite training to peak for Tokyo. Altogether, this season would have spoken well for the American, but the San Diego marketing and psychology student pushed past even these accolades to make Finals at Climbing’s first Olympic Games. Today, she is pushing her limits out on the rock. Having only just returned from a trip to Switzerland, Raboutou is still seeing the results of one of the longest training blocks of her life.

Her process came under the lens of director Nick Hardie. According to Raboutou, filming for The Wall: Climb for Gold began even before she qualified for the Olympics. “When it first started, I heard that they were doing the film on four athletes,” Raboutou said. She remembered feeling surprised, thinking, “I don’t really belong with Shauna, Janja and Miho. They are such big names in the sport and idols of mine. I didn’t see myself as capable of qualifying for the Olympics at that point.”

After qualifying, Raboutou dedicated to training. With the Olympics on the horizon, she decided to take off the 2020 Spring semester to focus on climbing. This felt difficult. “I have a really good group of friends and leaving them to take time off to train was really hard for me. I feared missing out. Seeing everybody together and not being there was really hard.” When the onset of the pandemic asked Raboutou to postpone her education once more, the Olympian felt stressed. She felt it would just be one more semester to be behind and additional time away from her community in San Diego.

“As much as I love climbing, I need a balance,” Raboutou reflected. “I cannot be 100% focused on climbing or it does not work for me.” Finding the space to breathe is an essential part of being a professional climber which is why so many top US and Canadian athletes attend University alongside their World Cup Seasons. Raboutou further varies her life with a passion for surfing she attained in freshman year.

Still, while varying interests promote longevity within the sport, Raboutou noted that she had to hunker down if she wanted to attain a high spot at the Olympic Games. Without any data on how to train for a Combined competition, Raboutou went at it as best as she could. Echoing comments from Britain’s Olympian, Shauna Coxsey, Raboutou noted there was not best way to train for the Games. At least, not one that anyone was aware of. As such, she had fun figuring out a new plan and anxiety over the exercises they were doing.

“With the Combined format there is so much to train. Even if you just choose one discipline, there is so much to train. It always felt like I could be doing more, even though I couldn’t. Bodily and mentally, you can’t do it all. That was hard to navigate, for sure. I learned so much about how to train that format and it will be cool for the next format to see what I want to keep and what I want to change, what worked and what didn’t.”

With that said, Raboutou is not yet thinking about Paris. Like Natalia Grossman, another strong American with a breakout season from this last year, the Paris Olympic Games seem in line with Raboutou’s interests, but she is more focused on the upcoming World Cup Series. “This last season gave me a lot of confidence in what I can do in the sport and in competitions. I feel like I can be better and do more and I want to push that. Something that is a lot easier about Paris is that I don’t have speed, so I don’t have to change what I am doing.”

In the meantime, Raboutou has been recuperating after the Olympics through rest and time outside. Although she maintains that the Games was one of the most incredible experiences of her life, she mentions that it was more the details surrounding the Games that meant the most to her. “I learned so much about myself and what I want in the future with climbing: what I want my relationship to be. With that came some of the biggest highs of my life and also a lot more lows because I was so invested.

“Some of the lows were more apparent than others: from not placing as well as I would have liked to feeling like I kind of had it in my hands before slipping on the final discipline. Lead was very emotional for me. It felt heavy for awhile, but it wasn’t even that specific moment. It was really the overall: working so hard for a single event and then it being over. I think that whether it went perfectly or poorly I would have felt the same way. Just that heaviness of an event being over and wondering what do to do now. Being able to relax was hard after the Olympics because I was so focused on training. I needed to be the best climber I could be.

Taking a break is really part of that cycle and important for the longevity of my career, but it is hard to mentally do that even if you know that it is the right thing. I would say that was a big challenge to overcome and definitely something I think I am still overcoming honestly, it was just such a big season, but also its something that taught me more than I could have ever imagined.”

For Raboutou, watching The Wall: Climb for Gold at its New York City premiere felt special. She saw her growth over that period and found her developing confidence reflected in the film’s progression. The film features the young American’s progression alongside her competitors and reflects one of the more exciting transitions in in competition climbing. This film represents an increased international focus on climbing as a sport. You can watch it here. 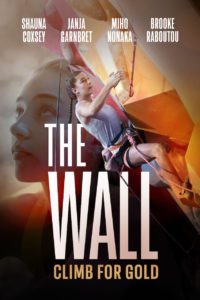