Babette Roy is one of Canada’s top competitive climbers. Hailing from Montreal, the 20-year-old is a familiar face in both National and International competition scenes. At the end of November, she won her first Canadian Boulder National Championship. We recently sat down with her to talk about her performance at Nationals, as well as her climbing routines, outdoor climbing, advice for young comp climbers, and goals for 2023.

This year was not the first time Roy has been crowned a Canadian National Champion. In 2018, she won Nationals in speed, a discipline in which she no longer competes. At last year’s Nationals event, she placed fourth in both boulder and lead. During her youth climbing career, she also won gold in Lead and Speed Youth Nationals. Roy’s competition successes have led to her inclusion in Canada’s High Performance Program (HPP), an elite group of athletes training to represent the country in IFSC World Cup and Olympic competition.

Leading into the Boulder National Championships in November, Roy was one of the favourites to podium. She was nationally ranked fifth in bouldering and was coming off a season of World Cup experience. She was up against stiff competition though, particularly from fellow HPP members Madison Fischer, Evangelina Briggs, Chloe Earle, and Sophie Buitendyk.

Roy didn’t have the performance she had hoped for on day one of the comp, coming in 15th in the qualification round. Her and 19 other athletes were moving on to the next day’s semi-finals.

She didn’t let her qualifiers performance affect her going into the semis. “I felt good,” she said, recalling her mindset. “I love semis in general. I love how it’s always an awkward round. I think it’s the hardest round, actually. I think I perform the best on super wacky, uncomfortable, and really physical boulders. I wasn’t that nervous. I was honestly just excited.”

Her positivity and excitement paid off, as she took first place in the semis. She was the only woman to top three out of the four problems.

Moving into the evening’s finals round, she felt good physically, but the high energy of the comps can be draining. “I was excited but for sure tired,” she explained. “The stress, seeing all the people, having to warm up again—it’s more mentally challenging than physically.” Unlike many other competitors, her skin was surprisingly not an issue. “I have really good skin in general. I think I’ve pierced only four times in my entire life. So, skin wasn’t really a concern for me.”

The finals started out well for Roy. She easily topped the first problem and reached the zone on the second. Problem #3 was up next, and it began with a difficult rightwards coordination move to reach the zone. Three of the five competitors thus far were unable to figure out the sequence.

The coordination move proved tricky for Roy as well. After falling over and over again, her frustration was building and time was running out. With 10 seconds left, she gave the problem one last attempt and unlocked the coordination sequence that had eluded her for the past three minutes and 50 seconds. It looked like the zone was hers but she heartbreakingly slipped and fell, and the clock ran out of time. Problem #3 was a shutout for Roy. Audience members and viewers of the livestream could see her disappointment as she walked off.

Madison Fischer, ranked first nationally in bouldering, was able to find the zone on Problem #3, securely putting her into the lead moving into the fourth and final problem. Roy knew that she had to top Problem #4 if she had any chance of winning, but she had to let go the frustration of Problem #3.

“[Problem #3] got in my head at first for sure. I can usually do these types of problems. In the moment, I was really frustrated and I’m usually not good at [overcoming] this, but luckily I had the chance to get over it and let it go. I was able to rant about it to my friend [and fellow competitor] Erica [Velev] in the back. Getting it out was good for me. I was able to get back on the right track.”

Although she had put Problem #3 behind her, Problem #4 looked very tricky. “When I read it during the preview, I didn’t know what to do,” she said. “At first, I thought it would be a problem that nobody would do. But then I heard that some people topped it which made me confident that I could do it. Now, I knew it was [possible].”

Problem #4 was very technical, requiring a sequence of sloper moves off a volume with bad feet. Madison Fischer and Chloe Earle couldn’t get past this tricky section, leaving Roy with the chance of winning gold if she topped the problem. After a failed first attempt, Roy made it past the sloper section, piano matched on a crimp, threw to a right slopey pinch, and finally grabbed the ultimate hold, topping the problem.

With this top, Roy had done it. She had become the 2022 Canadian Boulder National Champion.

How did she feel in the moment? “I think relief would be the best word for it,” she replied. “I was really relieved because I feel like I always need to prove myself even though I’ve done good things in the past and people know I’m a good climber. I always feel like I have to prove it again and again because I don’t always get the results I want on the National scene even though I know I’m capable of it.”

The Lead National Championships started two days later. Roy crushed it in the qualifiers and semis, taking first in both rounds. Like her fellow National Championships competitor Guy McNamee, Roy also finds lead comps generally more stressful than bouldering comps. “Lead still makes me way more nervous than bouldering,” she explained. “Anything can happen since it’s just one shot at a route. I was confident but I was also really nervous, and mentally tired.”

She set off on the finals route, making quick work of the sequences when she suddenly had an unexpected fall. Her right foot slipped off a volume as she was heading to hold 12. The slip down low put Roy in sixth place. Sophie Buitendyk earned gold, making it to hold 21+. 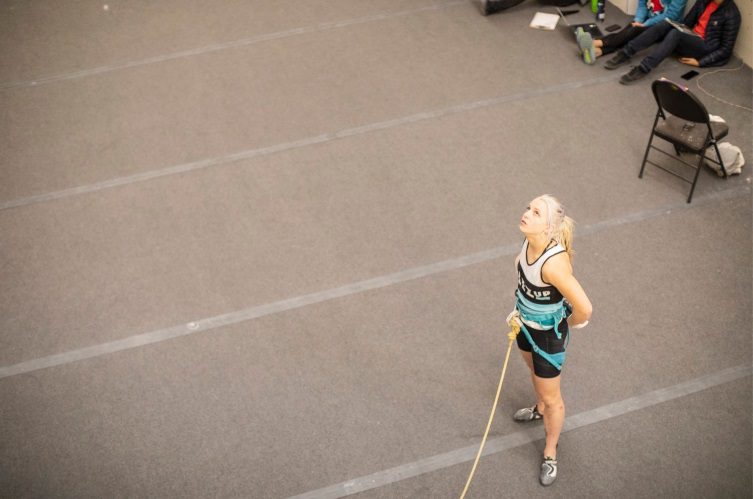 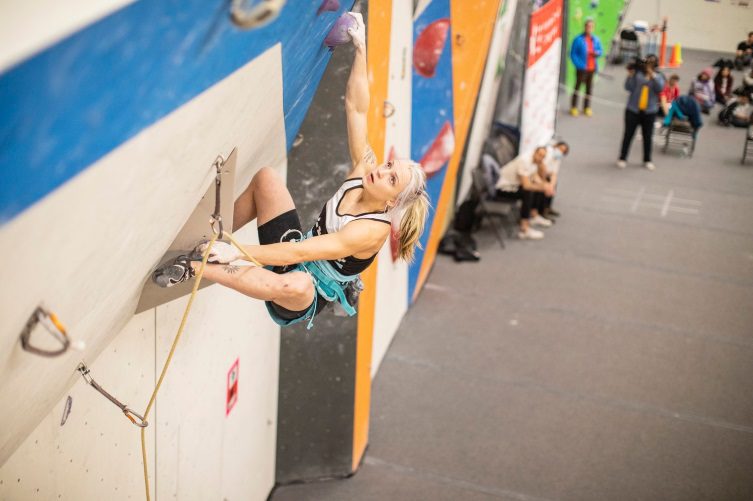 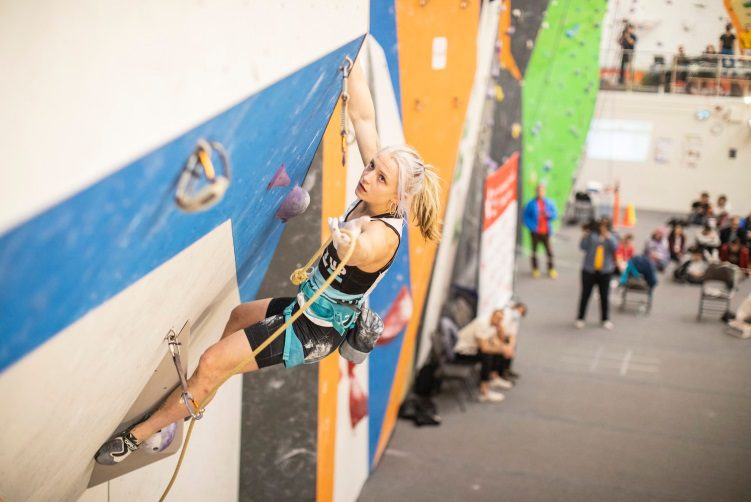 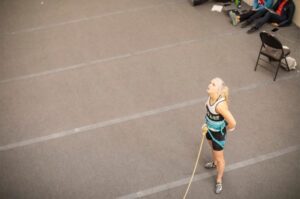 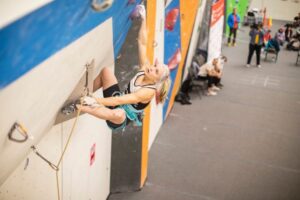 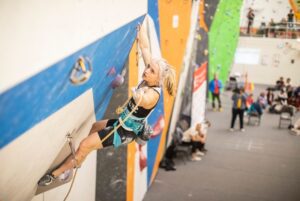 The section where Roy fell was undoubtedly cryptic. This same sequence sent three of her competitors groundward. “I actually don’t know what happened,” Roy said, recalling the unexpected moment. “I didn’t feel uncomfortable. I felt pretty stable actually. I had climbed good until that point. I think maybe I was too confident. Not careful in a way. But I don’t know.”

After a disappointing ending to Nationals, Roy said she didn’t get the chance to celebrate her bouldering gold medal win. When she arrived home, she got back to her routine, training for the next comp. Thinking back to her time at Nationals, she’s tough on herself, like many athletes, “I’m pretty neutral right now. I’m happy but I have a really hard time appreciating the fact that I won.”

Roy hopes that she will be able to participate in bouldering events and some lead events in the 2023 IFSC World Cup. “I would like to do well in those,” she said, thinking about her goals. “Maybe even a couple semi finals would be good. I think I’m capable of it. I just need to have all the elements at the right time. And then, if possible, I’d like to do the Pan-Ams and see if I can qualify for the Olympics, but who knows, we’ll see about that. I wouldn’t want to go to the Olympics without being properly prepared. I wouldn’t want to feel like I don’t belong there.”

When pressed about Olympic ambitions, Roy added, “I’ll have to see how it goes this year and next year in the World Cups to see how I’m progressing. But yeah, it could be there.”

Regarding her day-to-day climbing, Roy explained that she climbs primarily at Allez Up in Montreal but that she also visits all the different gyms around the city. She trains alone, under the tutelage of her coach Philippe Bourdon. Her regimen includes training and climbing five to six days a week, sometimes doing double sessions in a day. She has separate sessions for strength and conditioning and climbing-specific training. She also runs once or twice a week.

Roy is not known for her outdoor climbing experience. It’s not something she’s currently focused on, but it could be something she sees herself doing more of in the future.

“During the pandemic I kind of got into [outdoor climbing] because that was the only climbing that I could do. But usually I don’t [climb outside]. Maybe at some point I’ll be more interested in it. Since I’ve been raised in gyms, I prefer climbing inside. I do enjoy outside, but I don’t currently have projects or big ambitions. When I’m older and can’t do as many comps, maybe I’ll get into it a bit more.”

What Roy is known for is her comp climbing experience. She’s been competing since she was only nine years old. When asked about what advice she has for younger climbers coming up in the comp scene, she paused, carefully considering her response.

“Don’t rush it,” she began. “I feel like a lot of young climbers are really pushed by parents or coaches in a weird way. I see so many people that say they enjoy it, but it’s not for the right reasons. And some get into it too early. I got into comps at nine, but it was ok because I really enjoyed it and my parents never expected anything from me. I think it was a healthy environment.

But when it gets unhealthy, I think you should check if it’s something you really want to do. You should really enjoy the process because it’s such a beautiful sport. For sure, not every day will be a great climbing day. Some days I hate going to the gym and I have to force myself to go. But in general, knowing that you love this sport really does help you grow and develop.”