It is hot. In much of North America, the Spring season is over and many climbers are moving back indoors to begin their summer’s training. As the gym becomes busier, and the weather becomes hotter, making the right choices in your climbing gym becomes all the more important. How can we make sure we’re respecting everyone in our space? 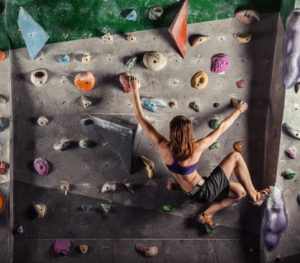 Nothing is worse than a busy gym. At the same time, nothing is better! Climbing with a lot of folks can be fun when people take turns pulling on the wall. When there is a new set or the gym is busy, taking the time to allow others to climb is essential to maintaining a positive atmosphere. If you are a more confident climber, allow space for the less confident climber. Offering the wall to someone else is both generous and a great way to establish an order without having to literally determine a climbing queue.

We have all done it. When the gym is empty, a person can pull onto the wall, make some moves, fall, rest under the boulder, and try again. When it is busy, this behaviour prohibits other folks from pulling on the wall. After you have given your attempt, step away and allow another to climb. Not only will this help you rest, it will force you to sequence the next portion of your climb. It is also the polite thing to do.

If you pull on to the wall and fall on the first move, it is reasonable to try that first move again. Simply pull on immediately. If you make any progress into the route, and other folks are waiting on you to finish, then rest between attempts and allow someone else to climb. When you are resting or sequencing, do so from afar. Do not rest or sequence under the problem.

What’s more, hold brushing is a kind service to offer your fellow climbers. If you are working a climb with some friends, brush the holds. It is good etiquette to allow a climber to climb next on the holds they just brushed. It is better etiquette to brush the holds yourself, and allow someone else to climb them. In either case, communication is important. Furthermore, if you do brush the holds, and you want to red-point on your freshly brushed grips, do not wait around. Hogging the climb by saying “I just brushed the holds,” is silly.

4 – Don’t wear your shoes into the bathroom

Most people will already know about this, but it is important to reiterate. Bathrooms are gross. If you wear climbing shoes into the bathroom, you will step in pee. Nobody wants to climb on holds that have pee all over them. 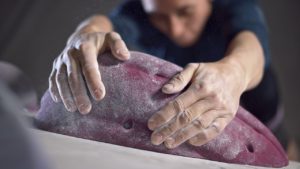