A few years ago, I didn’t make the finals at a Tour de Bloc competition in Calgary. It sucked. Then someone gave me a microphone and my perspective changed, my view changed, and not to sound dramatic, my life changed. You could say I’ve been around the block in the climbing community. I’ve competed for so long that I don’t even know how not to register for every competition I can get to. There was a time when I held my own with the best competitors in the country and those are fond memories, but they are becoming old memories.

One of the hardest things I think any athlete can do is leave competition. It feeds you. It’s the one thing that drags you to the gym in the middle of the winter in the freezing cold and pitch black. Furthermore, it pushes you to be better, smarter and stronger. So we don’t leave, because if we let the light go out, then what is left? In many other sports, retired athletes turn to coaching, or for a lucky few to broadcasting. I’ve been a coach and climbing isn’t quite ready for TSN, just yet. So you can stay involved around competitions, but I’m not a route-setter and judging isn’t really my idea of fun. I’m a talker and always have been.

Depending on the situation, I have the gift of gab. It just so happens that the finals of a climbing competition is one of those situations. So what do you do when your sport isn’t televised? Well, if you’re me, you step onto the mats for an entirely different reason – to excite the athletes, engage the crowd and to tell the story of climbing in real-time. Because I’ve been around climbing and competitions for nearly half of my life. I’ve seen it all, and sometimes it’s not always exciting. There is a lot of standing around. There is a lot of one finalists, followed by another finalist, followed by another finalist doing the exact same thing over and over with, at times, the exact same results. Now, that’s not to say competitions don’t have exciting moments – impossible movements, near misses, ridiculous flashes – but a lot of climbing happens in the climber’s head. It’s a thinking sport as much as a physical one and there can be a lot of thinking during the finals. 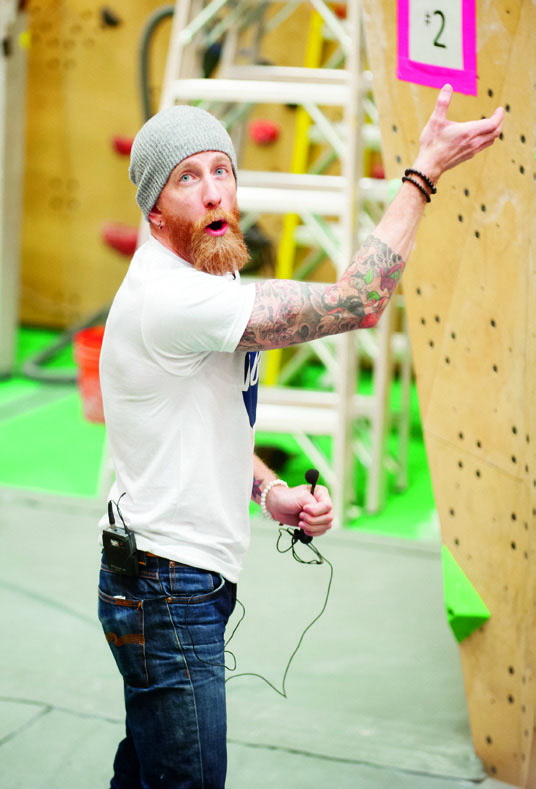 The crowd is not in their head and watching is not a thinking sport, so that is what makes the job of the MC – my job – such an interesting challenge. The crowd is a living, breathing thing, literally and figuratively. Their collective interest will slip into indifference. People get tired. They get thirsty. They look at their phones. They talk to their neighbours. You can rally them – you can stoke their fire – but it’s not always easy, and it doesn’t last long if the show doesn’t include holds being ripped from the wall or ridiculous displays of strength. This is where I earn my keep. This is where I thrive.

I love getting the crowd involved and keeping them involved until the finale. I want them to feel as excited about climbing as I do. When I missed making the finals of that Tour de Bloc and agreed to MC, it was hard to get past my anger about not climbing very well and to be upbeat and positive for my friends who had done what they needed to do to come back for the big show that night. It was also exhilarating: the energy, the crowd, the best seat in the house, the desire to make sure my friends had deafening support for their efforts. I rode the high that night, and it was fun. Then, when I did not make the next final at the following comp, I did it all over again.

The trend continued, which was good for my fellow climbers and gym owners, but it took me some time to adapt. I’m not entirely sure when the shift happened, but fast-forward a couple of years and being the MC is what I look for- ward to, when I go to competitions. After my second World Cup in Hamilton, I started to see a future in it, instead of the passing hobby of an aging climber. I also feel a draw to the other side of the lens, to commentate on the live streams that are starting to become more prevalent in the competition community. It’s hard to not be on the floor, but in its own way, commentating is an amazing way to be involved in the finals.

The commentary doesn’t provide the emotional high that being the MC does, but in some ways it feels more connected to the sport. I find it is more intimate and more can be shared. I get to engage the people watching from home through the comment stream on the live feed. For nearly all sports, commentary is an inextricable part of broadcasting. From curling to F1 to the X-games, no matter what the event needs from its competitors in terms of athletic or technical prowess, they need commentary to remain interesting to the viewer at home. The quality and the quantity of commentary may vary vastly from sport to sport and commenta- tor to commentator, but when it’s good, you almost forget it’s there and the conversation and the event merge seamlessly together. 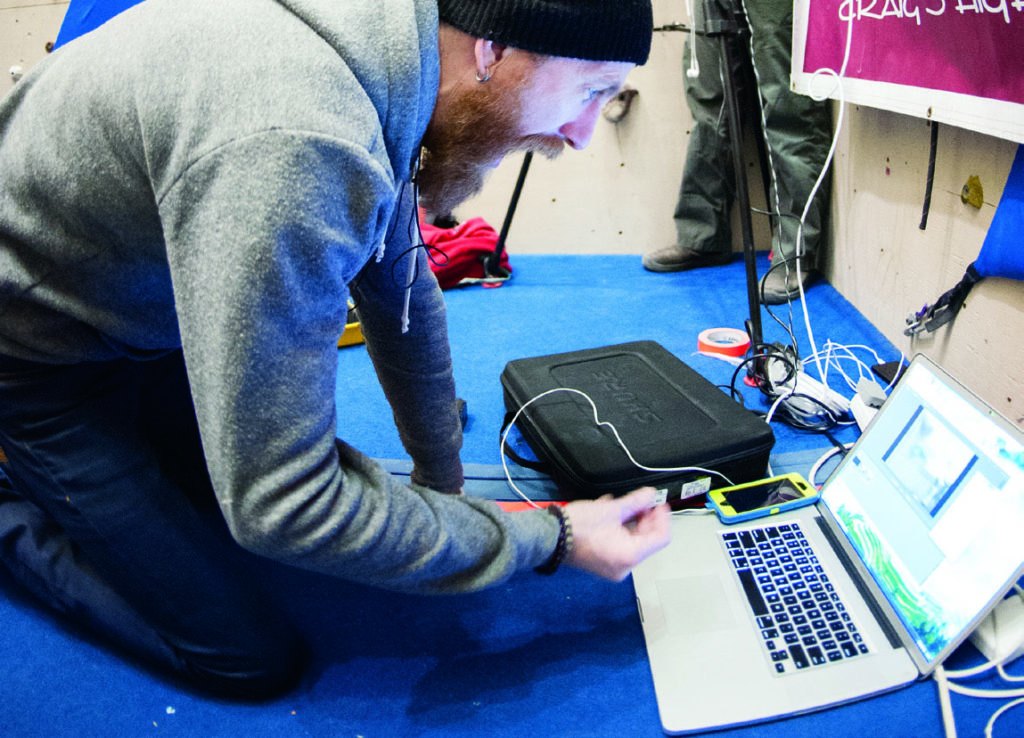 Live commentary provides an entirely different set of challenges, such as the need to be involved as a near-constant voice, providing facts and background, one layer on top of another, building on statements made earlier in the evening, making predictions based on inside knowledge of the competitors and the competition environment itself. There is value placed on the subtlety of the interactions instead of the drama of being the MC. There is another level of involvement to providing the commentary in order to enhance competition broadcast. Breaking down the climber’s style compared to the problems they are facing.

Making use of the inside knowledge on the sequences gained from talking with the route setters and forerunners or climbing the problems ahead of time. Being able to tell the viewers at home what the holds are like, where there is finesse needed and where there needs to be more commitment to a movement. It is the job of the commentator to be inside the minds of the fans, to be the ultimate fan, to truly be involved in the event they are watching and to use my insight to answer the questions that people didn’t even know they wanted to ask.

I finally accept that I am no longer a competitor and have come to grips with my transition. I now want to be the voice of climbing. Don’t get me wrong – I would still rather be climbing – but everyone needs to walk away at some point. When I walk away for good, I want it to be straight to a microphone and into your living room.