Even during a pandemic, climbing manages to push its boundaries through international competition and record-breaking first ascents. This next month offers the beginning of the 2021 World Cup season, while this last week saw Daniel Woods establish America’s first proposed V17. 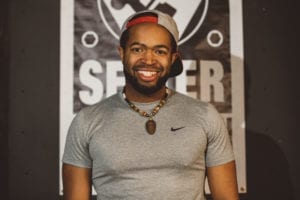 While climbing continues to rush toward the mainstream, the sport’s cultural identity struggles to keep pace with its increasing growth. While this last year has seen climbing’s community work to define itself, it still finds difficulty in self-description.

For decades the sport has developed through difficulty, but as indoor climbing becomes more widely appreciated, the attraction to performance has become only one of the many reasons that people climb. Today, many climbers involve themselves for the other characteristics that define the sport.

Among these, community has become the most significant. When all of the gyms locked down, many climbers were allowed enough distance from the sport to remember their original attraction to climbing: the community’s atmosphere. Still, while difficulty no longer represents what most people require from a climbing gym or climbing industry, performance continues to gate-keep jobs in the climbing community.

Between routesetters, coaches, desk staff, and managers, any job within the climbing industry appears to at least subtly require a degree of performance. In some capacities, this makes sense. Performance can indicate two aspects about a person and their relationship to the sport. 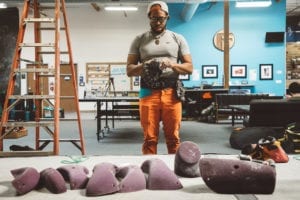 The first is the most obvious. Strong climbers love climbing. The second is practical. Strong climbers can lend beta to patrons, easily forerun the new set, and will be able to climb the same routes as the people they coach.

This all makes sense. In some ways it seems only right that the industry favours strong climbers; however, what happens when this receives too much emphasis?

In order to work this out, we spoke with routesetter Devin Dabney. Dabney has worked around climbing for years and has coached, set and climbed in numerous settings.

He has recently received attention in climbing media for his progressive views regarding merit for industry positions. Dabney believes the experience makes the best climbing employee, but has seen the industry describe experience exclusively through performance.

Dabney’s own history with this problem relates to routesetting. At his previous gym, he and a stronger routesetter put together a reset that frustrated a visiting climber. This climber found themselves unable to progress on a V3. In frustration, this climber reached out to the climbing gym to ask about their routesetters. Finding that Dabney, a V5 climber at the time, had worked on setting problems above his level, this patron left a negative review. His words had an impact. 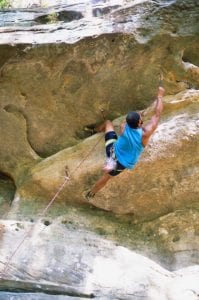 Routesetters were now required to set only boulders they could climb. While this might make sense at a glance, give pause for consideration. This climbing gym changed their policy as a result of a climber that did not even experience the issue for which they were complaining. Effectively, their words came out of frustration for being unable to climb this V3. They did not even try the hard problems.

Perhaps the greatest injustice comes with the fact that their complaint does not describe the situation. A V8 setter can set a V10 skeleton without having the ability to climb it. They need only to find a V10 forerunner to ensure the route goes. The best setting teams have climbers of multiple skill levels to ensure the veracity of a difficulty.

This complaint indicates the patron’s obsession with difficulty as well as this climbing gym’s reverence for it. Unfortunately, difficulty, here, is described by the V-number and not the actual movement itself.

It proposes that only climbers that have strength can make for proficient routesetters. This does not make sense given routesetting’s creative form. While experience does make a good setter, strength does not make a setter good.

For example, if I set a skeleton for a V10 but I’m a V8 climber, I can grab a forerunner who comfortably climbs V10 to help me. But with that, I’d also emphasize true forerunning requires everyone’s input – not just the people who can send something; this is a huge point of exclusion that happens in the industry (setters saying other setters’ opinions don’t matter because they can’t climb the problem), but to truly ensure the proposed grade’s veracity, you need a variety of climbers of a wide range of skill levels to try the problem, including people who can’t send it.

In this gym’s policy change, who could set which boulders became clearly defined. This means that every cycle, the same people would have to set the same difficulties which, in turn, limits variety. Like any creative discipline, especially one as interactive as routesetting, variety makes for an interesting product.

While any one person may have a number of ideas in relation to their discipline, they will still find limitations with their perspective. Having more people work on more problems can only make the product richer, so long as the team can work well with each other. 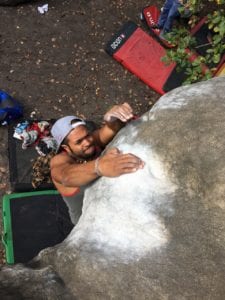 While this difference in perspective can present in numerous ways, it is difficult to find in people with similar self-descriptions. If everyone’s claim to experience is the same, then their interpretation of difficulty will offer more similarities than a more varied group of perspectives.

Still, a focus on performance persists, and not just within setting. Coaching positions and other industry positions often use performance as a metric to judge prospective job applicants. What’s the problem with an industry selectively focused on performance? Its trickle-down effect to the community at large.

Dabney described this feeling through his experience with climbing gyms internationally. “No matter where you go, it’s the same thing. People start talking to you after they see you climb climb a certain grade. It’s especially true for bouldering because it is easy to see. Once you do whatever people think is good enough, that’s when people will talk to you and begin to congregate around you.” 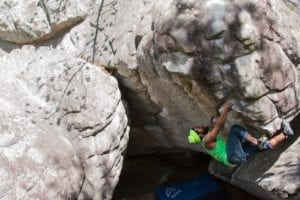 This relatable retelling causes problems for new climbers beginning in the sport. While climbing gyms have tried to make their facilities more welcoming, climbers still feel like they have to prove themselves to be able to access certain parts of the gym. Sometimes this means the training area and sometimes this means the most recent reset.

This elitism makes the sport less welcoming to new climbers. This means fewer beginners join the sport, which means the industry can support fewer passionate climbers that wish to make their living off of the discipline. Furthermore, it becomes difficult to promote diversity and inclusion when there exists a foreboding air in the atmosphere.

This particular problem presents most problematically for diversifying climbing’s demographics. “It doesn’t do any good to get new climbers into the sport if they are just going to be pushed out. Climbing, now, is all concerned about diversity, but if you don’t fix the athletic elitism, what are all of these brand-new, Black and brown rock climbers going to do when they begin? I can tell you, from my perspective, when you first go to the gym, it’s hard to tell if people won’t talk to you because you’re Black or because you’re new.”

Dabney has found that exclusion sometimes occurs as a function of ability instead of racism, but he notes that new climbers have no way of knowing this.

Altogether, difficulty does not define many people or their reason for rock climbing. The level of a person’s ability does not necessarily describe their experience with the sport. That presumption selects for the same type of person in industry positions. This selection emphasizes an importance for difficulty that can have alienating effects for new climbers. Without new climbers the industry cannot support an increasing number of professionals.

Some brands, like La Sportiva, have begun to sponsor athletes based on aspects other than performance. The archaic counter-argument has always focused around how companies should not hire people just to check a box. This misinterprets the point. The industry should seek people of differing perspectives so that it can offer a richer product. Its resistance restrains the sport’s progression. 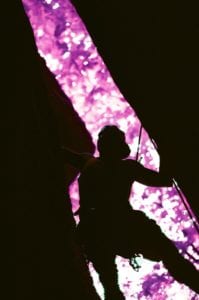