Describe the life of a professional climber. What comes to mind? Training, surely, but what about their life between sessions? For many athletes, the upcoming Olympic Games fills schedules with trainings supported by sponsors and separated by rest. Every Olympian has to give their heart if they wish to succeed in August, but not all effort is equal. At least, not all effort is the same.

The Olympics Series focuses on climbers from around the world as they prepare for the Tokyo Olympics in summer 2021. Read about how Team Italy’s Michael Piccolruaz overcame Covid-19 here. And meet Team Australia’s Tom O’Halloran. The fully-employed, father-of-one might have a name unfamiliar to some in the North American climbing scene. For Australian locals, the V15 rock wrangler has established and climbed some of the country’s hardest routes and boulders. Primarily a sport climber, he left the competition scene behind in an effort to pursue his love for developing. This love would take him to Australia’s Blue Mountains. 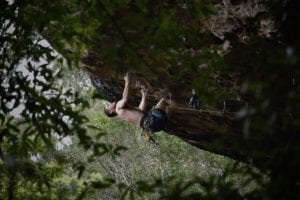 Although he did compete in the Youth World Championships in 2007 and 2008, it wouldn’t be until 2019 that the athlete would return to the world stage. While many climbers would jump at the opportunity to become an Olympian, O’Halloran considered its consequences.

On a 2018 family trip to Céüse, he would talk it over with his family. While many Olympic-level athletes have found support through National Federations or brand-related work, the Australian scene remains rather small. As such, even the strongest athletes have little financial or infrastructural support.

In some ways, this has benefits. It has allowed O’Halloran to climb for the sake of climbing. Unlike some, he has been able to enjoy a life both in and outside the sport. The Australian Olympian is fully employed. He is also a father to a six-year-old named Audrey. 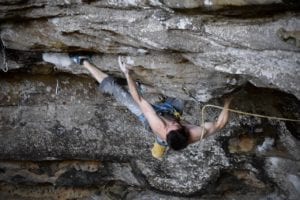 Although he saw the Olympic Games as an opportunity, he also recognizes that it would change a life he already loved. As he looked about Céüse, he wondered whether he could give up long outdoor trips with his family for the couple of years of Olympic-level training the Games would require.

After some consideration, his partner suggested he go for a run and think about it. “I don’t think you can give up on that dream of being an Olympian. Just go for it, you don’t want to regret it.” Several kilometres later, O’Halloran would return with fresh stoke for what would become the most challenging training of his life. His first goal would become the Oceania Championships.

Ultimately, the competition would boil down to O’Halloran and another athlete. With that said, each member of the Final field had a legitimate chance of taking home first prize.

“I don’t froth out on training the way other people do.” According to O’Halloran, maintaining a record of his weighted hangs and pull-ups hit low on his list of priorities despite his almost impossibly productive work ethic. Due to the fact that his home in the Blue Mountains sits two hours from the high-end training facilities of Sydney, O’Halloran had to make some challenging schedules to have everything fit.

O’Halloran laughed about a couple of days he had last week. “The other day, I got up, did my strength and fingerboard training before work, made my daughter’s lunch for school, went to work, picked my daughter up from school, did half of my leg-strength training session, went to a parent-teacher interview, finished off the next part of my leg-strength training, made dinner, tucked my daughter into bed, replied to a few emails, went to sleep, woke up an hour later for a Zoom meeting with the IFSC, and then was up at 5:15 am the next day to go to the city to do the uniform unveiling for the Olympic Team.”

He then went to a two-hour training session in Sydney, had a meeting with the New South Wales institute of sport, and came home to make sure his daughter had completed her homework for that evening. He smiled “That was a particularly hectic 48 hours, but you just wouldn’t have it any other way. It keeps you grounded in real life.”

This last point has become important for O’Halloran. Although everything can become about rock climbing while on a route, having other aspects to life allows O’Halloran to remember what is important. He said that family, work, and community have helped him away from sitting on a bad day’s training.

Although the hardworking Australian loves living life to the fullest, he recognized that it is not all stoke and sunshine. “There are hard bits to it. Until the beginning of this year I’d gotten less than $2500 in sponsorship money through all of it. You can either see it as a hindrance or you can just get on with it.”

Still, without the media, money and sponsorships, O’Halloran noted that Australia’s climbing community has maintained a casual relationship with its culture. “Since we don’t have all the sponsorships and the media and stuff, no one is taking themselves too seriously. It’s just a normal day at the crag. It doesn’t get too blown out in any particular way.”

While this commendable approach has preserved one of the best aspects of smaller climbing communities, it has given fundraising responsibilities to the athletes. For O’Halloran, fundraising for Tokyo has fallen on his shoulders. Although climbers across Australia have donated what they can, O’Halloran will need a bit more cash to ensure the best possible performance at this upcoming Games.

Does this discourage the hardworking Olympian? Not even slightly. “It’s pretty special to be the first person to represent your country in the sport that you love. To be the sole male representative is pretty special as well. It’s kind of a daunting thing because you’re out here alone.”  Still, he gets to blaze the trail for those athletes that follow behind him.

Although the closest “gym” to O’Halloran resembles an old school aesthetic, O’Halloran does not believe that training equipment will make or break Team Australia. Instead, he runs progressively faster speed times, lifts heavier weights, and amasses greater numbers in finger strength.

While he sets his sights on finals, O’Halloran also anticipates the Fall. With literal years of high-performance training under his belt, O’Halloran knows that this outdoor season offers ground-breaking potential. For now, he trains at home with his daughter as the days tick down to climbing’s most important International competition. Support Tom O’Halloran here.