Climbalytics is a new Fitbit-esque data tracker for climbers. A wristband worn while climbing, at a participating gym, syncs via Bluetooth to an app on your phone and keeps track of a variety of data points about your climbing session.

We spoke with Brandon Hill, co-developer of Climbalytics, to find out more about the technology and its potential applications. Hill believes this data tracker could have a big impact on the climbing community – not just for individual climbers, but for gym owners and route setters as well.

For Climbers: How it works

The climber wears a wristband on her wrist. When she begins climbing, the tracker scans an RFID (Radio-frequency Identification) tape that has been installed by the setters at the start of a climb. It works like a hotel room card key, but with an extra long range (10-12 inches). There is also RFID tape at the top of a boulder, or last hold on a route. When the tape is scanned, the device syncs to your phone and logs data about the climb using the Climbalytics climber’s app.

Via the dashboard on her phone, a climber can see various stats from her sessions, from the number of attempts on a route, number of flashes, total V-points climbed, active climbing and rest time, total distance climbed, etc. The data is synced automatically so no manually entry is required. 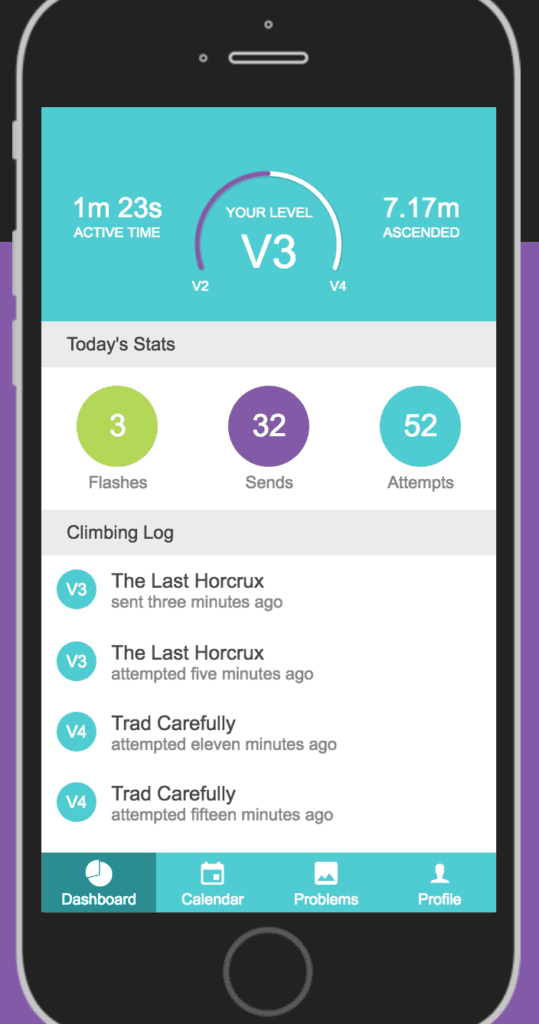 For Route Setters and Gym Owners

According to Hill, climbers have much to gain from this technology, but gym owners and route setters may have more. The data collected by the Climbalytics system can provide the route setters with feedback they would rarely get otherwise. For example, they could see numbers on which routes are getting the most traffic, and whether or not boulders are getting sent, flashed or not even tried.

Moreover, if individual users choose to enter and share personal stats such as height, ape-index, gender, etc., then setters can learn even more. Does one setter tend to set “reachy” problems that shorter climbers can’t send? Does someone else set routes often preferred by girls? Is this or that problem over-graded compared to others in the gym?

According to Hill, this technology can improve the gym climber’s experience by helping setters learn what people like to climb. And he believes Climbalytics can reduce subjectivity and increase consistency in gym grades, which would no doubt be great for members. Happy members = happy gym owners.

According to Hill, this technology can improve the gym climber’s experience by helping setters learn what people like to climb.

Of course, the more climbers who participate, the more data there is, the more useful the information gleaned. Hill and his team are working to get at least ten gyms excited about the technology. Until a device is on the market for individual sale (hopefully January 2020), gyms can get set up with the Climbalytics system and offer rentals of the wristband prototype. This is what Crux Climbing Center in Austin, TX, is doing.

In March of this year, Climbalytics teamed up with Crux Climbing Center to run The El Cap Challenge. The goal was two-fold: to showcase their innovative technology, as well as the kind of community event that a gym can organize using Climbalytics.

The El Cap Challenge was a month-long competition that challenged members to climb the distance equivalent to climbing every pitch on The Nose on Yosemite’s El Cap. Participants tracked their total distances using the Climbalytics app.

Registered climbers signed out the wristbands from the gym, entered their user IDs, and accumulated “mileage” on the walls. They could go as often as they liked, and could climb for as long or short as they liked. It did not matter how hard the climbs were, or if climbs were repeated. The goal was simply to climb 3450 feet.

The beauty of such a simple challenge was that anyone could take it on. And it was so by design. According to Hill, the goal of the Climbalytics El Cap Challenge was to create a competition that was more of a community event, accessible to everyone, from beginners to elite-level climbers. Indeed, the person who climbed the most distance over the course of the month (9500 ft) was a 5.9 climber.

The goal of the Climbalytics El Cap Challenge was to create a competition that was more of a community event, accessible to everyone, from beginners to elite-level climbers.

People also personalized the competition. In addition to the baseline distance goal, people gave themselves additional challenges and arranged side-bets. Two experienced climbers wanted to see if they could beat Alex Honnold and Tommy Caldwell’s sub-2-hour record. They used auto-belays on 5.7-5.9 routes and timed how long it took to complete the equivalent distance of The Nose. It took them just over 2h10m, and their skin was absolutely destroyed.

According to Grace Nicholas, CMO/COO at Crux Climbing Center, the event was a big success. “People…enjoyed the challenge for different reasons, which is cool to see the device be so versatile. Some used it competitively against their friends to have the most distance climbed, others used it as accountability to climb a certain amount a week in order to reach their overall goal.”

Nicholas is now working with the Climbalytics team to have wristbands available to rent on a monthly basis. For $5 a month, members can “check in with our front desk [for] a fully charged wristband and…return it at the end of their climbing session.” From her point of view, “The device will benefit Crux Climbing Center through many facets, including climber retention by giving people goals and incentivizing people to make climbing a habit, as well as the data we hope to gain from the climbs that are, say, less popular or never climbed. We can also continue throwing events like the El Cap Challenge to create additional cash flow with minimal work from our team.”

The first Climbalytics friendly comp was a success. And there are many more challenges like this one that gyms could hold internally, as well as wider community challenges between climbing gyms. There’s lots of potential, says Hill.

Given the minimal additional time required to install and scan the RFID tape, it seems like there’s lots to gain and not much to lose for gym owners and setters. And given the current excitement around training for climbing, might this device be the next hot thing?