Ross Kedl is a professor of immunology and microbiology at the University of Colorado School of Medicine. Kedl is also a home-wall-building rock climber. He loves climbing, indoors and out, and was sad to see the end of gym climbing at the beginning of the pandemic. Fortunately, Kedl has an opportunity to create a bit of change when a Colorado-based company reached out with a plan to help reopen thousands of climbing gyms around the world.

Huge thanks to @cuanschutz and the team of researchers for their efforts to test our new product. We hope Secret Stuff Hygienic gets people safely back to their favorite gyms! Link to their research in bio. #gymreopening #workoutsafetytips #coronavirus

The company in question, Friction Labs, has long been at the cutting edge of climbing chalk technology. When the pandemic began, Friction Labs began work on a new version of their already popular “Secret Stuff”.

In the past, Secret Stuff has come in both alcohol-free and alcohol-based formulas. Since the beginning of the pandemic, climbers have wondered at the effectiveness of using liquid chalk as a sanitizer for climbers looking to return to their sport. Friction Labs’ original “Secret Stuff” boasted a 45% alcohol concentration that, when mixed with their blend of magnesium carbonate, produced dry hands and superior grip.

Though 45% is nothing to sniff at, it is nothing compared to the 80% ethanol concentration recommended by the Food and Drug Administration (FDA) for hand sanitizers. To address this issue, Friction Labs began playing with a new formula that would include 80% ethanol.

Though Friction Labs cannot describe this new “hygienic” liquid chalk as a hand sanitizer due to its particulate components, it performed well in tests run by Kedl and his two CU Anschutz Medical Campus colleagues.

Friction Labs sent an email to thousands of its customers, including Kedl and New York graduate student Anthony Antonelli, informing them of this new product and asking if there were data showing “Secret Stuff” to be antiviral.

Antonelli reached out to Joe Sun, professor of immunology at New York’s Memorial Sloan Kettering. Sun reached out to Kedl,  Friction Labs’ co-founder Kevin Brown sent samples of their new formula to the professors, including associate professor Michael Schurr at the CU School of Medicine, and the work began.

The methodology of testing is included in a CU Anschutz Medical Campus article that can be found here, however, they results concluded that this new Secret Stuff was as good or better than using hand sanitizer in terms of preventing the growth of microorganisms on hands.

To further their testing, lab-grown SARS-CoV-2 was, according the CU article, “spotted on a plastic surface which was then recovered and grown in a dish of cells to see how much virus was recovered.” After five minutes of contact, the results showed that the new Secret Stuff performed just as well as the disinfectant at eliminating recoverable virus from a plastic surface.

“According to Kedl, “We’ve got data that show (Secret Stuff) is robustly antimicrobial and antiviral.” These results are significant for both indoor and outdoor climbing.

The product itself is currently available for presale on Friction Labs’ website. It is currently the most hygienic chalk on the market, it is ph-balanced to be gentle on skin, it performs better than their other liquid chalk in terms of remaining on the skin and 10% of proceeds will be donated to the NAACP to support the fight for racial equality. 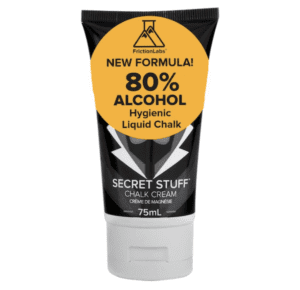