Dave Heerema has been travelling around the world ticking off difficult and classic boulder problems. Recently his flowchart about bouldering went viral on social media. We touched base with Dave this weekend for an interview.

How long have you been climbing? I’ve been climbing for about 10 years. I’m not surprised to hear that people don’t know me, Canadians east of Squamish don’t even know who Tim Doyle is.

When did you start? I began toproping in Ottawa. I moved back to Thunder Bay to finish University where I climbed trad and sport for about a year before permanently relocating to Ottawa. There’s a lot of good trad potential in Thunder Bay. Alternatively Ottawa must be the worst place to be a boulderer. All the bouldering close by (which isn’t that good mind you) has been banned by the NCC and the closest location is Val-David, about two hours away. In the spring and fall we drive six hours on a weekend just to get to some boulders (Niagara Glen, The Gunks, etc). I’ll repeat what Dave Graham and others have said for years: if you want to improve at climbing you must live as close as possible to a lot of climbing – unfortunately I can’t do that, so I just train in the gym as much as I can and take trips as often as I can.

Do you only boulder? Yes, I only boulder. Well, ok, if I’m really honest I usually climb on a rope once or twice a year – I’ll throw on a harness at the gym to make fun of the sport climbers and everyone’ll watch me get pumped. When I spent some time in Mallorca I did a week of deep water soloing and I thought that was just amazing. You have that freeness of movement and simplicity / purity of bouldering with a bit of adventure. I’m just a regular climber who works hard and stays focused, and I feel that to keep my bouldering strength I need to focus only on bouldering.

Hardest send? Grade wise I climbed Alma Blanca V13 in Hueco Tanks, but that’s not personally the hardest thing I’ve done. It’s hard to pinpoint the hardest thing I’ve done personally because send burns are extremely situational but maybe when I did Rorschach Test V11 in Bishop in 2009 or Venus in Scorpio V11 in The Gunks in 2010, but probably my hardest was Lethal Design V12 in Vegas last year. It sucks because if I had some boulders locally I know I’d climb much harder numbers.

Future trips? I’ll be going to Rocklands, South Africa next week. I’ll be there for five weeks. After that I have long term plans to hit Joe’s Valley in the Fall and spend some time this winter back in Vegas. I’ve climbed all over and Joe’s is the last remaining major American bouldering destination I have to hit.

When did you think of the flow chart? I find the bouldering community in the USA has a lot of inside jokes, slang, and stories that don’t make it public but are pretty well known amongst full time climbers who are in ‘the scene’. These jokes might be lost on the public, but I wanted to start to produce some funny stuff that some climbers with a lot of experience could relate to. I only know bouldering so I made the chart. You’ll remember last year there was the infamous ‘shit climbers say’ video posted online and I thought it was clever because it was the first real glimpse into the culture of gym rats and climbers. I guess it’s because of the great distances, but I feel that bouldering culture is collected in isolated pockets across North America and there’s not a lot of sharing between these cultures. It would be nice if there was, and we should use the internet more effectively for that.

Favourite climber? “Favourite climber” sounds kinda noob, but there’s certainly a number of climbers who I admire for their ability, technique, or achievements. I already mentioned Tim Doyle but more famously I admire Christian Core, Ben Moon, and Malcolm Smith. I also met Marc Le Menestrel once in Fontainebleau and that was incredible. I don’t expect many readers to know these guys, but these are real legends and were way ahead of their time. Pull up some old footage and watch these guys climb. They’re weightless. Watch Core on Plains High Drifter, Ben Moon on Karma and Malcolm Smith on Monk Life, and I’m sure you’ll be amazed. 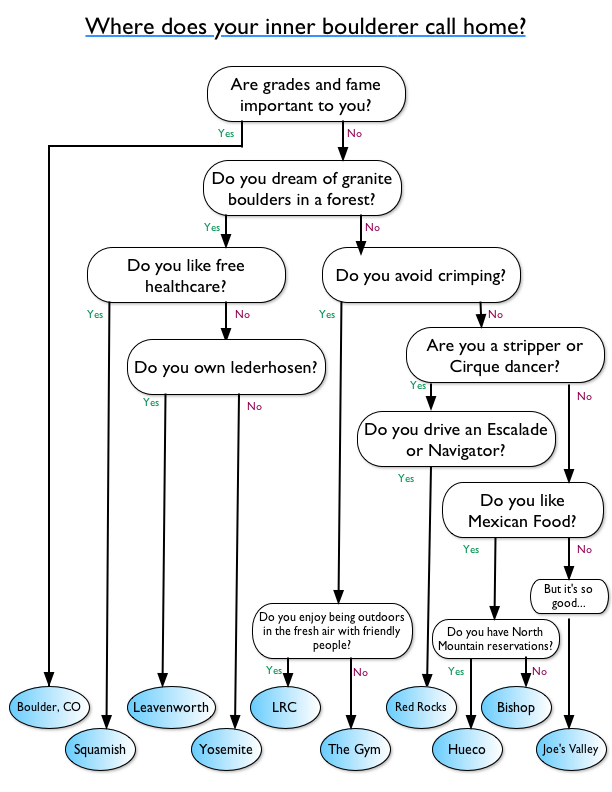