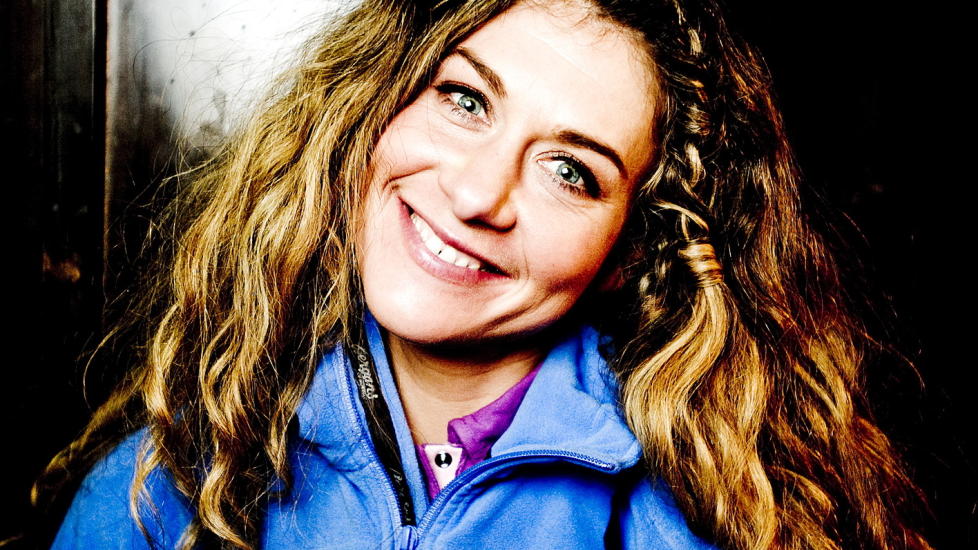 Cecilie Skog is from Ålesund, Norway. In 2004, she climbed Mount Everest and has been a professional adventurer since, turning the typical Norwegian Friluftsliv (outdoor lifestyle) into her job. On Saturday, Nov 2nd, she gave a one-hour presentation at the Eric Harvie Theatre as part of the Banff Film Festival. She brought the audience on an emotional roller coaster as she relived tragic times and epic highs.

With curly blonde Scandinavian hair, glacier blue eyes and a Norwegian ascent she began her multimedia show with her trip to the South Pole, followed by her trip to the North Pole. “Rolf believed that you are not really an outdoor person until you’ve gone to one of the poles. He loved the Antarctic and had spent 18 months there. So after my trip to Everest, he asked me if I wanted to cross Greenland with him. On this trip, I became infected with the polar virus and wanted more of the wide horizon and of the feeling of just walking further and further. During our trip through Greenland we decided to walk to the South Pole and to the North Pole,” she said while photos from her trips flashed behind her.

Rolf Bae was a Norwegian explorer who proposed to Skog on the North Pole, they married soon after. Bae died in 2008 during an avalanche which killed 11 people on K2. Skog told the story about her trip to K2 with Bae. With watery eyes she said, “How could I go home, what was I going home to? Rolf was my home and I had to leave him there.”

Skog’s sense of adventure is strong as she goes on self-sustained expeditions all over the world. “When Rolf and I went to the Himalaya in 2003, we were living totally autarkic. We ate potatoes for two months, sometimes cooked, and sometimes fried. I like it as simple and as real as possible. When I see other expeditions that take giant dome tents and TVs on the trip, I think they are not really present. I don’t go to a base camp to play video games. We managed the expedition into the ice without any support and without any material depots. We dragged the entire luggage on our sleds,” Skog said.

When Bae died on K2 Skog had already become the first woman to complete the Explorer’s Grand Slam which is to climb the seven summits, ski across Greenland and visit the North and South Pole. After his death she was not motivated to leave her home for a year. “The beaches at our home town at that time – Stavanger – helped me. First, I just sat there and tried to hide in the grass, so no memories or thoughts could find me. Later on, I went there with friends and relatives, with Rolf’s parents as well. It was easier to breath on the beach. I had the horizon, the air, the sky. Slowly I regained strength and developed new dreams. Rolf taught me that dreams are precious. So I grabbed my dreams with both hands and asked two girlfriends if they wanted to cross Greenland with me. They both wanted to. It was fantastic. Suddenly I had found people again with whom I could share my dreams. It helped me to come back to life,” Skog said.

Ryan Waters, an American explorer, joined Skog for the Greenland crossing. “After Greenland, I felt alive and wanted to keep skiing. I asked Ryan to cross Antarctica with me, he said, ‘Where’s Antarctica?'” In January 2010 the pair finished the first unassisted and unsupported crossing of Antarctica ever. They took 70 days, from November 13, 2009 to January 21, 2010, to complete the more than 1,800 km long journey across the Antarctic continent. “We packed 78 kilograms of food for 78 days and took a lot of time to enjoy the 800 kilometre march. During the tour Rolf felt very close to me. I simply let my feelings get out, I cried almost every day. It felt so good to crawl dog-tired into the sleeping-bag at night, and finally to be able to fall asleep without taking any medicine. And it felt good to have somebody with me who understood me and gave me the necessary freedom,” Skog said with a big smile on her face.

In 2011, she returned to the North Pole, “In summer 2011, I wanted to go to the North Pole with the Norwegian adventurer Rune Gjeldnes using skis and folding canoes. Well, we didn’t get very far. Often there was too little water to paddle and too much water to ski. I learned one thing on that trip: it is not important to reach the goal, but to go outside, to try your best, and have fun.”

After Skog showed a short video of herself singing to the Arctic Ocean, from her canoe named for her grandmother, a song which her grandmother used to sing to her, she thanked everyone for coming. What followed was one of the loudest standing ovations the Banff Centre has had.

After the show I asked her what her next adventure will be and she said, “Sailing! I’ve got a boat in Barcelona and enjoy learning something new from scratch. Sailing is a bit like ski expeditions, the vastness, the sky, the freedom.”