Some climbers want a public apology from Jason Kruk and Hayden Kennedy for their removal of bolts off the Compressor Route.

Remember in 2012, when Jason Kruk and Hayden Kennedy chopped the bolts of the Compressor Route on Cerro Torre in Patagonia? The local climbers of El Chaten have not forgotten and have voiced their thoughts on social media, and surely at the pubs and crags around Argentina. On the Facebook page Centro Andino El Chaten, a new post with an image of Kruk and titled Persona Non Grata, shows how emotional and attached people are to the chopping.

Many climbers viewed the chopping as a heroic deed, freeing the mountain of its Compressor Route, “One more time, Jason and Hayden have done a heroic deed that I’m sure they’ll be recognized even more for in time. It is not OK to leave obscene amounts of junk in the mountains. That is an old school mentality that is not sustainable,” said Jon Walsh. When asked about the Compressor Route, the legendary Slovene climber Silvo Karo, responsible for two new routes and one major link up on Cerro Torre, responded, “That climb was stolen from the future. Without all those bolts the history of that marvelous mountain would have been very different. I am convinced that in alpinism how you have climbed is more important than what you have climbed, and I have no doubt that the best are those that leave the least amount of stuff behind.” Other climbers such as Jim Bridwell said, “I would suggest to all climbers of great ambition some positive adjustments in motivational aims, to lean more toward adventure and mystery and less towards control in the perfection of means. There is no adventure in climbing comparable to a first ascent. If climbers want to prove their virtuosity and prowess, this purpose would best be served in doing their own first ascent. But they should be prepared for the judgement from future self-righteous climbers to bring vengeance upon their route.”

The chopping of the Compressor Route surfaced climber’s emotions and polarized arguments about the “purity” of alpine climbing. See Rolando Garibotti’s story on pataclimb.com here.

It is rumoured that Kruk and Kennedy are in Patagonia for the season.

The bottom of the poster reads, “They imposed their personal opinion on the the community of El Chalten. It was a feat, but a sad mistake. We invite those people to think and perform an act of public apology, compared to what we understand was a violent and invasive actions on our community. Meanwhile, El Chalten will continue declaring they are not welcome because of there conduct is contrary to the search for common solutions, values ​​and respect, both the community and the history of the space we inhabit.” 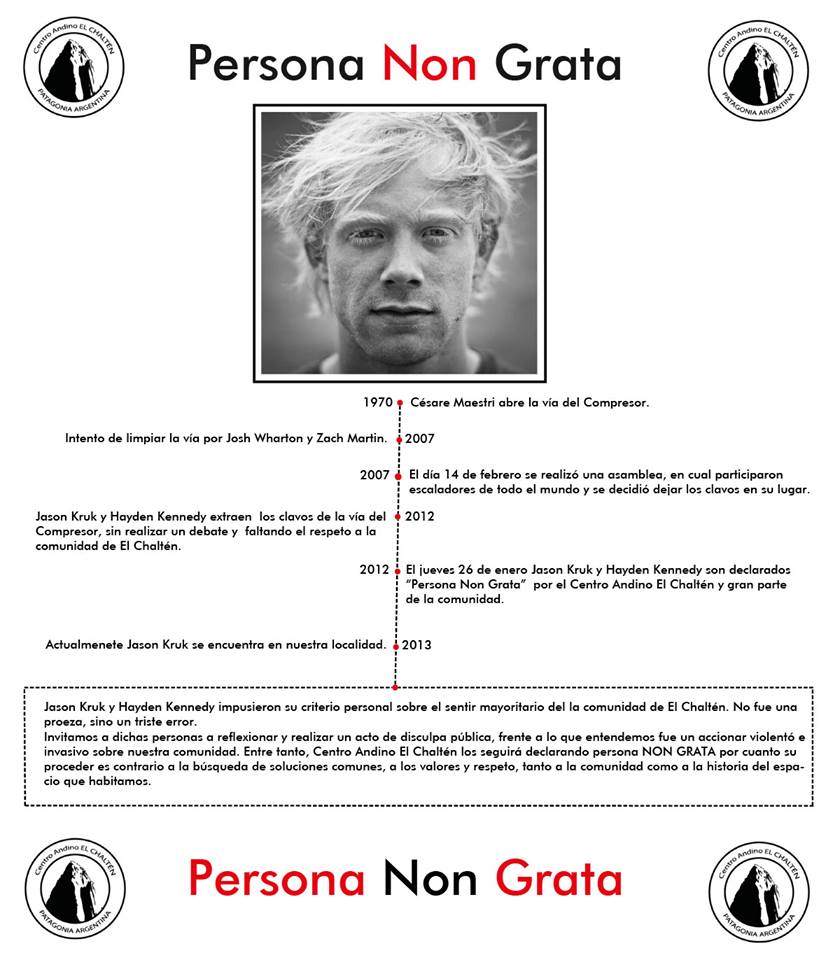 Cerro Torre by Fair Means from Patagonia on Vimeo.