The Red River Gorge Climbers’ Coalition (RRGCC) and the American Access Fund have teamed up and purchased 309-acre climbing area in Beattyville, Kentucky. The land is named the Miller Fork Recreational Preserve and contains several miles of mostly undeveloped cliff line that will ultimately yield more than 12 individual crags and hundreds of routes. This purchase is significant as the cliffs will provide new climbing opportunities and should help relieve the crowding at some of the more popular established crags.

This land acquisition also signifies an important trend in the region, where climbers actively pursue and purchase prime climbing areas. In 2012, the RRGCC paid off a loan and became the owner of the popular 700-acre Pendergrass-Murray Recreational Preserve, an area that contains more than 300 routes and over 20 separate crags.

The Miller Fork Recreational Preserve was originally owned by Lee County resident, Libby Roach. Having seen climbing’s positive economic impacts in the region, Roach approached the RRGCC in early 2013, hoping to find a way to facilitate a sale that would help both the local community and climbers.

“I care very much for Beattyville and Lee County. It is my hope that our decision to sell this beautiful land will only bring positive things to all,” says Roach.

At this point RRGCC contacted the Access Fund and the two organizations worked together to finalize the $245,000 land purchase.

As with the purchase of the Pendergrass-Murray Recreational Preserve, the RRGCC is hoping that climbers donate to a fund that will repay the money borrowed for the land purchase.

More details can be found at the RRGC website and climbers can donate to the Miller Fork Recreational Preserve here. 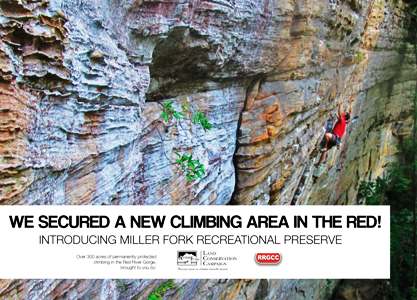