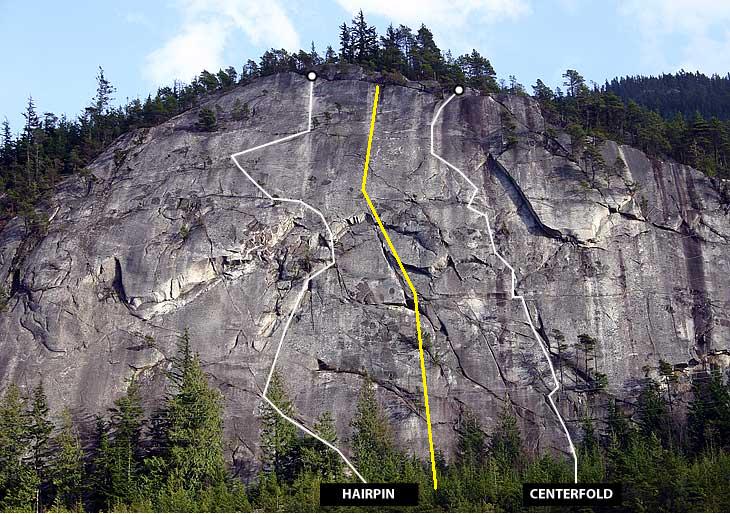 John Howe’s Obsession is the yellow line. Howe is a Squamish local who has been climbing new routes for decades, before the crowds showed up, in 1981 Howe wrote, “Gone are the days when you could recognize every car in the parking lot – nowadays it’s hard enough just to get in.” Howe also organized an annual slide-show; an event Tami Knight said this about, “The slide show was the touchstone for the Squamish climbing community. Much drugs and alcohol and carrying on about whom had climbed what and what had climbed who, a social gathering of climbers to define themselves by.”

Howe has climbed new winter routes, new long adventure routes and new hard routes on the Petrifying Wall in Squamish. This spring he climbed Obsession, 5.10b, a new line at the Papoose, where he has been scrubbing old climbs and bolting new ones. John said, “A somewhat contrived but enjoyable, well protected, moderate route that follows a nearly independent line weaving its way, back and forth across this great face. Obsession offers a good multi-pitch alternative when the Papoose’s ‘top 100′ are busy. The last pitch is very good.” He climbed it with Robin Barley and Glenn Woloski.