Four Canadian trekkers are among 20 people who have died in an avalanche in Nepal’s Annapurna region. Rescue efforts are ongoing, but reports say over 100 are stranded and dozens are missing.

The avalanche on Wednesday killed at least four Canadians in the Annapurna region. According to a statement from the Trekking Agencies’ Association of Nepal, the bodies some killed in the slide have been recovered, but dozens are missing.

The rain and snow in Nepal were caused by cyclone Hudhud that hit neighbouring India several days ago.

Canadians Ian Weslted and Jason Kruk are currently in Nepal, but south from where this avalanche occurred. The alpinist are attempting to climb a route on the south face of Nuptse. On Oct. 13, Welsted wrote, “Red clouds at night mean cyclone Hudhud is going to make us wait while it dumps on the face.” Welsted and Kruk descended to the town of Panboche to wait out the storm.

Canadian’ Ian Welsted and Jason Kruk on Nuptse in Nepal

The Thorong La pass is on the route that circles Mount Annapurna, the world’s 10th highest peak.

Another three Canadians were rescued. No names have been released.

Laureen and I express our condolences to the families and friends of the four Canadians who lost their lives in an avalanche in Nepal.

It was not clear if the rescued Canadians were travelling with those who perished in the avalanche.

The three women, including two from Montreal and one from Quebec City, left Montreal for Nepal on Oct. 3.  They were trekking in the region where the avalanche hit and are now missing, Terra Ultima said. The company is not releasing the names of the Canadian travellers.

October is the most popular trekking season in Nepal, with thousands of foreigners hiking around Nepal’s Himalayan mountains.

More details as the become available. 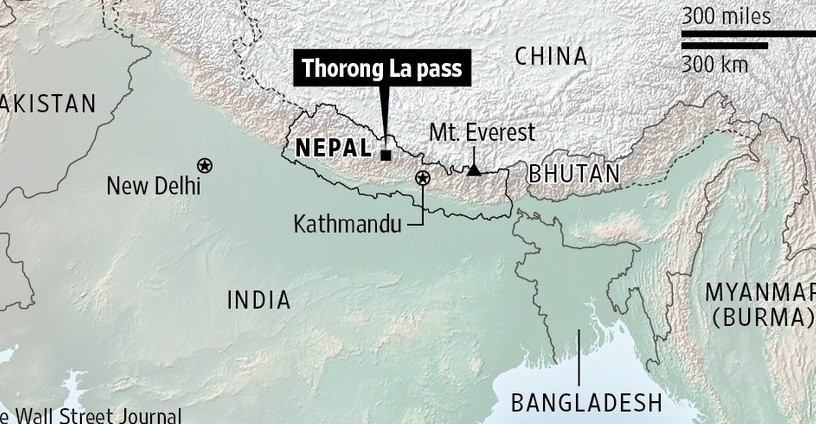