A small group of climbers explored the opportunities in Dacsawia near Canmore in 2007. The pristine spot has beautiful rock jutting up from a tranquil lake and is the most developed and documented deep water solo (DWS) area in Alberta.

It is also the location of Holowach’s Heavy Flow 5.13a/b and other more moderate routes like Foreplay 5.10. Numerous variations exist, including some futuristic looking lines, but climbers with less mutant-like abilities should explore some easier routes still awaiting an ascent. Holowach points out that “all the routes were done in a true ground-up style with no top-rope rehearsal. We loved the sense of discovery and exploration every time we launched into a new line. Without a rope and gear, it felt like we were soloing, but without the negative consequences if we fell. I became so captivated with the area that during the summer I would go there and run endless laps on those routes as training. I’d climb until I was tired and then just jump off.”

Although Holowach is a big DWS proponent, he not naive about the difficult Alberta conditions, “The biggest challenge with DWS in Alberta and BC is water temperature.” It’s true that the glacier-fed Rockies lakes are cold, but during the short summer season, an occasional refreshing plunge can be refreshing. Holowach also believes “there’s potential for more DWS in the Rockies, you just need to get out there and look and be willing to deal with the cold water.”

When Shaun Reed showed up in the fall of 2013, the crag was quiet. People only climb at Dacsawia on the warmest summer days. The water was nearly freezing, and the sun had not quite moved into position. Reed laced up his shoes, zipped up his wet suit and tied his chalkbag on and went for it anyway.

Recently, Reed made the first free ascent of The Unemployment Line, 5.12, in Yosemite, for more see here. Here are some photos of Reed taken by Cassie. 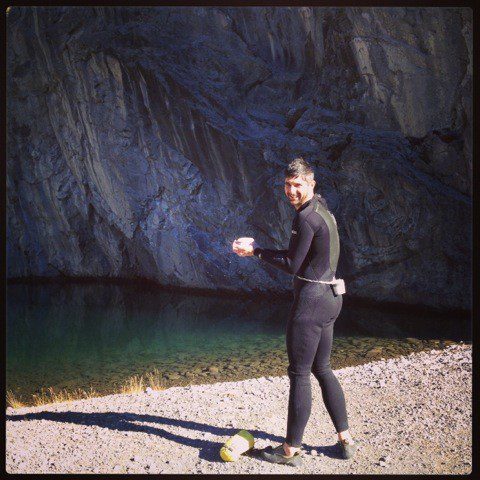 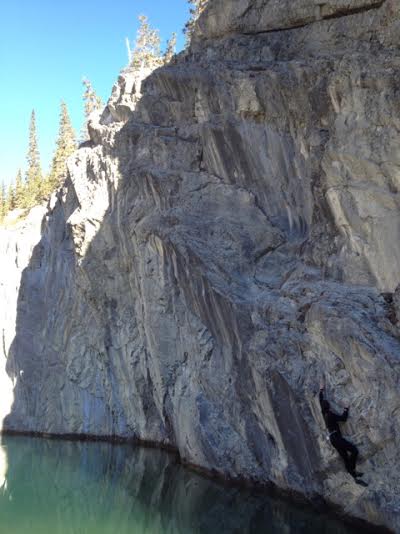