“Mid-August is the end of summer in Greenland,” said Canadian climber Bronwyn Hodgins. “It was getting pretty cold, and we knew we probably didn’t have much time before the cliff could be covered in snow and ice as winter sets in.”

A storm rolled in on day two of the push,  and the team of Hodgins’s husband, Jacob Cook, Jaron Pham, Zack Goldberg-Poch, Kelsey Watts and Angela Vanwiemeersch were trapped in their portaledges. A brief break allowed them to climb a couple more pitches, then the snow started in earnest.

Two days later, the weather wasn’t any better, but Cook surprised everyone by declaring, “I think I wanna go climbing.”

“Kelsey and I decided to join him, we may as well try!,” said Hodgins. They climbed a couple of pitches of wet rock and then popped out above the clouds. “It was miraculous,” said Hodgins, “like being in an airplane, with a landscape of cloud below, beautiful sunshine and dry rock.”

Hodgins, who is well known for including everyone on her team, no matter how remote the objective (“I like sharing the experience,” she said, “I would just get lonely soloing”), radioed to the three climbers below, telling them to come up. A few hours later, all six made it to the summit of Qaersorsuaq, completing Sea Barge Circus, a 900-metre 5.11+ with beautiful cracks, no aid climbing and perfect rock.

Sea Barge Circus, however, was only part of a massive 65 -day, 400 kilometre (including a week-long portage), self-propelled expedition. The team travelled along fjords and coastlines, stopping off at giant sea cliffs to belay directly out of their inflatable kayaks (with harnesses sometimes already on under their dry-suits) and sample some of the finest remote granite on the planet. On the way to Qaersorsuaq, Hodgins, Watts and Vanwiemeersch put up Time is a Construct, a 400-metre 5.11 A2 with sections followed cleanly up to 5.12d, in a 50-hour push.

Seagull’s Garden, a 400-metre 5.11+ first climbed by Nico Favresse and Ben Ditto in 2011, was repeated by Cook, Pham and Goldberg-Poch in a 28-hour push. Earlier in the trip, Hodgins, Cook and Watts also put up Wear’s Your Paddle?, a 250-metre 5.11, while Pham, Goldberg-Poch and Vanwiemeersch made the first ascent of Fish are Friends, a 200-metre 5.9+.

Hodgins and Cook have climbed big walls on Baffin Island and in the Cirque of the Unclimbables, as well as Yosemite, Europe, Mexico, South America and around their home in Squamish. Cook’s first expedition was to Greenland in 2013 in a sailboat.

“Since Jacob’s first time to Greenland, Jacob and I have built up our skills climbing big walls around the world together,” said Hodgins. “We like creating a journey around it, becoming immersed in the giant landscape and being forced to go slow. In Greenland we had a lot of gear and food, so we weren’t moving quickly. We had to work with nature, timing our days with tides and the winds. The wind really affected us, but when it blew in our favour we rafted the kayaks together and used our tarp as a sail!”

A film of the trip is coming out as part of the Brit Rock Film Tour on Nov. 2, worldwide streaming from Nov. 3 to 6, tickets available here. There are also in-person showings at venues in major cities across Canada. 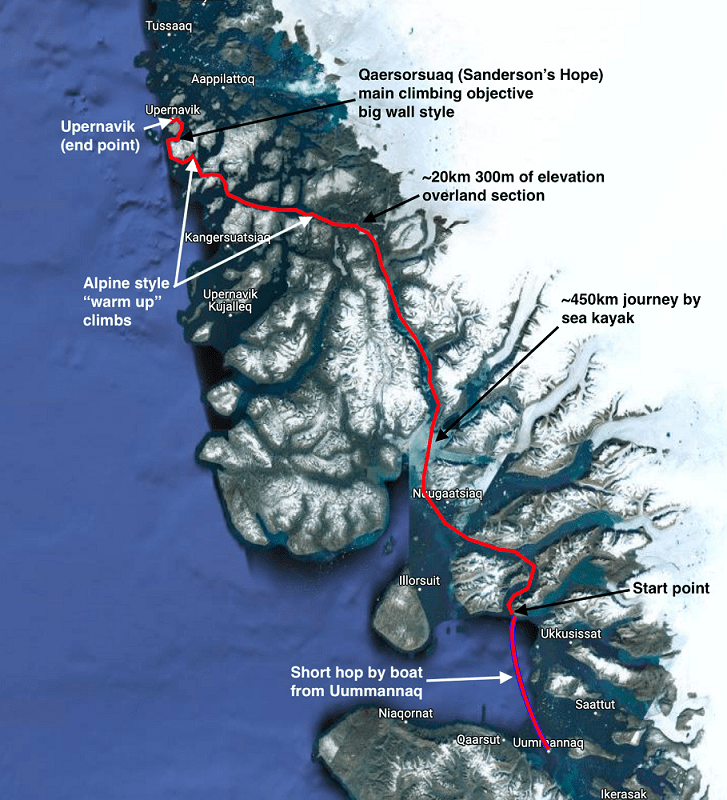