Kalymnos is legendary and before I travelled there, I wanted to learn about the past two decades of development. Climbing started in Kalymnos in 1996, when Italian climber Andrea di Bari visited the area for his summer holidays. He explored the potential and returned the following year with some friends.

They established 43 sport routes at the crags called Arhi, Odyssey and Poets. Bari returned later that year with Andrea Gallo, a photographer for Alp magazine. After articles began popping up in the spring of 1999, countless climbers visited the area with power drills and bolts.

It wasn’t long after that when the local municipality worked with Aris Theodoropoulos to promote the local climbing. They scrutinized the protection of the existing routes and added new ones. They started a website that had translations in English, Spanish, German, French and more.

It was in the fall of 2000 when an international climbing event was organized by Acharnes Greek Alpine Club to take place at Kalymnos. French climber Catherine Destivelle and 180 climbers from 13 countries came together to help transform the walls into a climber’s paradise. The local council then published a guidebook and gave it away to climber.

Nowadays, Kalymnos is one of the world’s best sport climbing areas. With nearly 3,000 routes in 2016, most accessible after a short approach, it’s easy to see why so many travel to the Greek island. The limestone has more features than Canadian limestone because there is no freeze/thaw cycle that breaks rock.

Some of the routes have big tufas and climb through caves. Others climb vertical faces with thin holds and pockets. There are plenty of moderates on lower angle walls and routes up to 5.14d on steeper one. Most of the routes have steel biners fixed at the anchor you can lower off.

The bolting is never too spacey and the first three bolts are always close to prevent decking. I noticed that most of the climbers were there as couples and there weren’t as many young people as Thailand. It’s cheap and easy living in Kalymnos with great food and friendly locals. The deep water soloing and big stone arches add to the variety of climbing.

I knew before I went that the grading is soft and sometimes called ‘vacation grading.’ Many of the local guides painted the grades at the base of routes, but those grades are often different than the guidebook grades. When the weather is warm and humid, the routes are much harder. I travelled there with a few friends from Canmore in the winter for two weeks.

We travelled from Calgary to Heathrow to Athens to Kos and ended in Kalymnos. The day we arrived, we rented scooters and picked up food for our visit. The first night was spent walking the streets of Massouri and we noticed most of the tourists were climbers. We watched the sun set on the Aegean Sea.

As a photographer, I’m always torn as to whether I should shoot or climb. Kalymnos is so esthetic, but having spent the winter photographing ice climbing, I wanted a bit of a break. I did spend a few mornings hanging from ropes shooting, how could I not. We teamed up with Italian born, now local Kalymnian, Lorenzo Doria. We headed to the famous area Grande Grotta. This cathedral-like cave is near-perfect for both climbing and photography. It offers some easily accessible stances and incredible compositions.

After some time shooting, I packed the camera to climb. Every morning, we would wake up, eat breakfast, jump on scooters, stop at Sofranos coffee shop, ride five to 10 minutes to a crag, climb all day, eat at a different restaurant, drink too much wine, stroll home, edit photos and pack for the next day.

This routine would take a long time to grow weary of. We visited Pothia, which is the main town on the island and accessible by ferry from Kos. It’s a port town and densely populated with colorful terraced houses and apartments. Wandering the cobbled streets, finding small bakeries and drinking strong coffee was a fun way to take in a different side of the island.

We also spent time in the port town of Vathy. It is the place where deep water soloists hang out. Due to cold water temperatures and limited time, we didn’t sample the steep sea-side cliffs. There were lots of cats on the docks waiting for fish parts tossed to them by the fishermen.

During the finals few days, we continued to climb at as many different crags as we could. By the end of the trip, we hardly put a dent in the guidebook. Amazing to think the first routes were only established 20 years ago. I can’t wait to return.

From Canada, fly to Athens then grab one of the many flights to Kos on Olympic or Aegean. Once in Kos go to Mastahari and take a ferry to the Kalymnos port town of Pothia. Take a bus from there to Massouri or wherever you are staying for a couple.

Autumn: The ideal season for Kalymnos. The weather is often perfect for climbing. It rarely rains in Kalymnos during September and October, and from mid-October even climbing in the sun can be a real pleasure. The sea is still warm enough for swimming even in early November. October is certainly the most suitable month and this is when the number of visiting climbers reaches its peak. Head to Galatiani to avoid the crowds.

Winter: It’s common for climbers to be cragging in T-shirts on Christmas Day. All winter can provide nice climbing temps and it doesn’t rain much. Best crags are Arhi and the ones surrounding it.

Spring: Conditions are similar to autumn and it is a great time to visit. While there aren’t many trees, the wild flowers are in full bloom and you can smell them on the way to the crags. There is a chance of rain and the sea it too cold to swim in. The rock might be seeping and tufas will be dripping. Big holds are more likely to break when wet so avoid the big caves.

Summer: The northern breezes (the meltemi) keeps the island relatively cool in the summer. While most European areas are plagued with heat, Kalymnos can be quite pleasant. If you avoid the sunny crags, you can climb comfortably most of the season. Some good summer crags are Odyssey, Afternoon, Spartacus, Kasteli and Symplegades. If it’s too hot, go swim.

The routes range from having 15 to 25 quickdraws so bring a big rack of them. If a route is 10 to 12 metres then you’ll need around a dozen. If you need more than 15, the guidebook will let you know. Many climbers recommend bringing 30 to 50 quickdraws in case you leave some on a project.

You will need five to 10 long slings for some of the stalactite and tufa routes to reduce rope drag. Bring at least a 60-metre line, most climbers bring a 70 or 80-metre. Always check route lengths and always tie knots in the dead end of the rope. 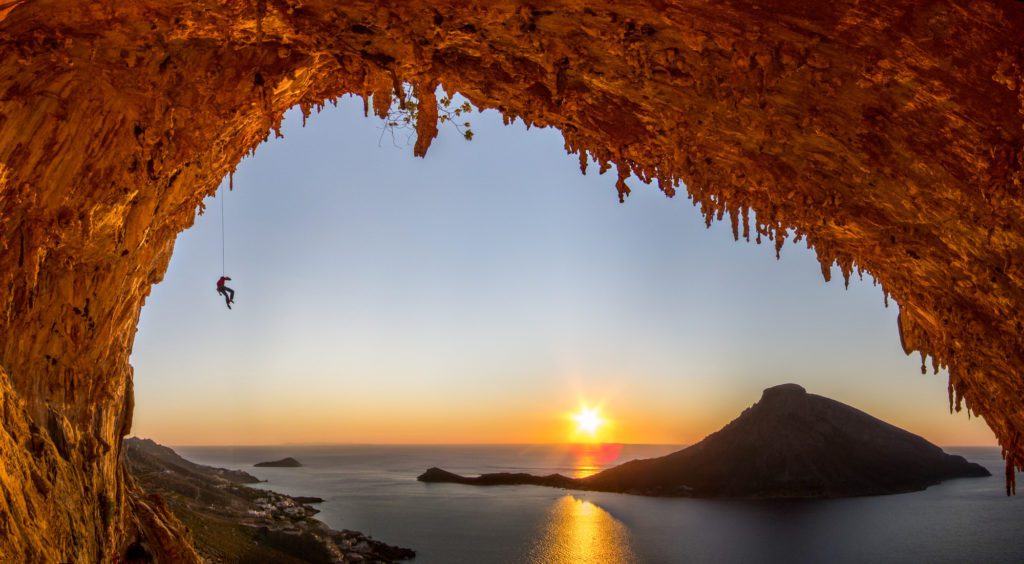