Parks Canada is hoping to provide 25 to 50 “hot spots” of coverage in select national parks and historical sites by the summer, tripling them next year. Instead of the relaxing loon call, campers might soon be listening to the latest You Tube hit.

Parks Canada spokesman Andrew Campbell said Friday it is still in its “first phase of procurement for service providers.” The world of outdoor enthusiasts was overall not pleased with the initial announcement, it was not clear where Parks was intending on supplying Wi-Fi.

“It was probably a good water cooler debate for a couple days,” said Campbell. “Most social media was so far out from what we are actually talking about,” he said. Immediate reports after the announcement had people split in their support, with most not in favour.

Campbell was clear that Parks was not intending on supplying it to backcountry areas, rather available where current technology already exist such as motor homes, campers and holiday trailers camped at park sites.

“What we’ve really found is the younger generation is looking at ways in which they can send back the digital postcard on Instagram and Facebook to say what a great time they are having,” said Campbell.Campbell said Wi-Fi access will also benefit people looking to keep tabs on the news. “If you look today, a lot of readership and viewing of the media actually happens that way,” Campbell concludes.

Google ‘National Parks Wi-Fi’ and you will find polarized comments such as, waste of tax dollars, if you don’t want to use it then don’t, and  learn how to unplug, if you can’t put your phone down for a few days, seek help.

As a climber I know the benefit of checking weather updates and avalanche conditions, downloading topos and reaching out on social media for beta.

As a young boy, before I was a climber, I spent my time camping and fishing in Ontario and Quebec. When we arrived at the campground, checked in, I knew we were in the wilderness. We might see a bear, we might catch a fish, but no matter what, we left the T.V. and video games at home. I remember we would bring a Game Boys for the car ride, but it had to stay in the car, the only games we could play once “out there” were with a ball or a board. If it rained we would read or fish off the dock, or just simply go for a walk.

Of course, this was before the internet took over our lives. For some of us, we can resist the need to use Wi-Fi everywhere, we can resist the urge to “socialize” on the internet. However, some people are addicted to their technology, even people who use the excuse, “well I am only using it for emails and work, because I have to.”

I don’t want to base myself at a campground, anywhere in Canada, and have people sitting around the fire on their phones and laptops. “If I don’t want to use it, I don’t have to,” and I won’t, but others around will be.

The internet was once called the information highway, and I don’t know anyone who wants a highway in their park. Families rarely access the backcountry, they base themselves at highly accessible, already equipped campsites, the ones Parks is talking about installing Wi-Fi to. Children have enough difficulty finding solace from the need to be “connected.”

“I am glad I will not be young in a future without wilderness.”
― Aldo Leopold

Over 20-million people visit the parks each year, Wi-Fi is Park Canada’s way of reaching out to a younger audience, the urban screen-based Canadians. It seems contrary to offer Wi-Fi to people as an opportunity for them to get in touch with the world around them, the outdoors, by putting a screen in front of them.

For people who are heading out for an adventure, those who are in love with the wilderness (pre-Wi-Fi,) internet access might add to the experience. For those who don’t know when to leave the “highway,” Wi-Fi will only distract from the surroundings. Are our parks built for those of us who know what wilderness means or for those yet to discover the meaning. Technology has good and bad aspects, it’s part of our changing society, it’s not evil, but when it comes to our backcountry (or campgrounds) it requires discussion. -BP

“We need the tonic of wildness…At the same time that we are earnest to explore and learn all things, we require that all things be mysterious and unexplorable, that land and sea be indefinitely wild, unsurveyed and unfathomed by us because unfathomable. We can never have enough of nature.” ― Henry David Thoreau, Walden: Or, Life in the Woods 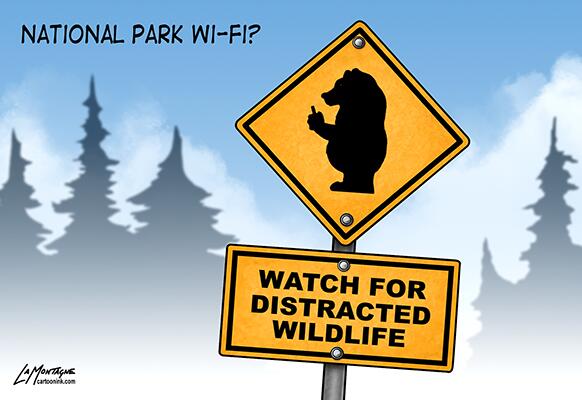