Learning from The Prophet 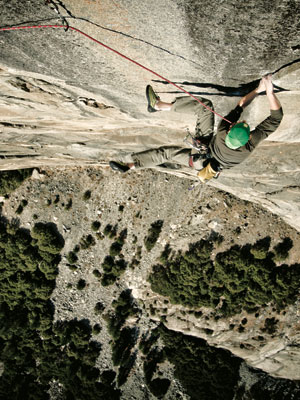 When I saw him for the first time since getting back from England, Will Stanhope had a beer in his hand, a cast on his foot, and a neck-brace draped over his lap. He hated that brace and wasn’t too happy about his crutches either, which leaned in the corner of the room. Empty cans of Hells Gate strewn about the floor made it clear that Will was having a hard time dealing with his current situation. Broken bones and a broken heart – individually these things are difficult for anyone to handle, but combined, they’re nearly too much. But that’s a different story.  Behind him on the wall was a new poster I hadn’t yet seen. Something he brought back from the UK. The photograph was stunning – a beam of light streaming across an absurdly exposed arête with a teeth-gritting Leo Houlding latched onto microscopic crimps, rope running through two ancient pitons, 1700 feet above the Valley floor. Will has the spirit and without knowing exactly when his talus bone would heal, he began scheming future objectives.

“What are your plans Trott?” He fired away between big swigs of beer.

“I don’t really know.” I shrugged, snapping open a wobbly pop from the fridge. “All I know for sure is that I’m going to Yosemite for a month this fall. I want to be a dirtbag again. You know, turn off the brain and just climb whatever looks good.”

“How about the Prophet?” he suggested.

Honestly, I had not given it much thought. I figured I would ease into El Cap and see where my adventures take me. I mean, I wanted to free it one day of course. I just didn’t know when. But then Willy laid it on the table and suddenly I was intrigued.  “Sure” I replied. “Let’s give it the old, college try.”  The beer went down easily. 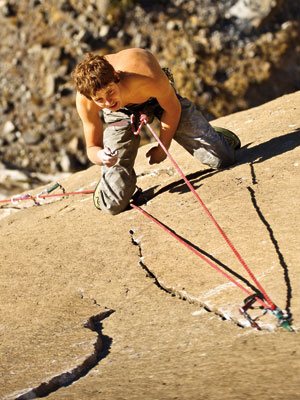 On the rainy drive south we took shifts behind the wheel. In the passenger seat we’d roll smokes and read Leo’s account of the Prophet in Rock and Ice. With each reading we’d pick up a new clue, some tidbit of information to inspire us and stoke the flames; we had six uninterrupted weeks of El-Cap bliss ahead of us, enough to get any climber boiling over. Around Ashland, Oregon, we finally turned off the wipers, turned up the Stones and pushed on into California’s starry night.

The next morning, as we dropped into the Valley, the sun smothered everything in sight. There were friends around every corner, but we had no time to waste. Our pent up excitement for the battle ahead needed release. We parked the van, stuffed as much rope into our packs as our ankles could hold and launched up the backside trail.

On the summit, we feverishly unpacked, refueled and anchored our rope to a tree.  Will tossed the remaining coils over the edge with a mischievous grin and was gone before I could find my harness. Rapping off the Captain is like nothing I’ve ever experienced. The wind whips over the edge in chaotic gusts, the rope disappears out of sight, cars look like tiny ants and you find yourself double checking every buckle and sewn strap on your harness. I even inspected my biners for hairline fractures. Eventually however, there’s no choice but to relax, trust the system, lean back and step below the lip into a separate reality.

And that’s how we stayed for five weeks – focused on the climb. We were trying moves and pitches like Leo had done, many from the top down and some from the ground up – meeting somewhere in the middle. It was a lot of work, but it was fun. If it wasn’t we would have just walked away. Will’s ankle kept improving, but he had good days and bad days. The worse days were when bad weather moved in and the change in pressure would cause the bones to swell and ache. He’d suck back a few Advil with a Sierra Nevada and we’d continue on. Will’s tough and his greatest skill set (as far as I can tell) is his drive. He loves climbing to the point where he’s willing to push past it all for another hit of the high and wild. 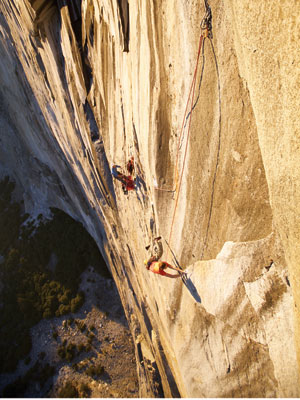 A ground fall doesn’t just break the body, it also breaks the mind. Of course they both heal with time. On the lower half of the climb mid-way through the trip, Will fought and conquered his demons on runout 5.11 and 5.12. His most spectacular lead however, came on the second day of our final push. After five exhausting weeks in Yosemite, 10 pitches up, under the Devils Brow lives an eight-foot dyno and a scary 60-foot traverse. The pitch goes at 5.13c R and ain’t no give-a-way. After six failed attempts to latch the incredible huck, Will set up one more time. With everything on the line, he launched himself across eight feet of totally blank granite and caught the flake perfectly on the other side. His body swung around like a tetherball on a pole until he slammed into the wall and came to a halt. He had a raw, distant look in his eye, something I’ve seen only once or twice in my years climbing with Will. It all happened so fast, I whooped as he found his feet and composed himself. He smirked, and the next 60 feet were some of the most gripping minutes of my life. But like a seasoned pro, Will tracked across the 5.12 rail over 1500 feet of nothing and picked through the final dihedral to gain the anchor. It was a very proud effort and I was honoured to be his belayer. Empowered, I followed Will’s lead facing the same giant pendulums and luckily pulled it off. Drinking whiskey from the bottle, we celebrated. Tomorrow is a new day.

The California sun poked over the rim just as we poured a second cup of the devil’s brew down our gullets. This would be our third day on the wall and only one pitch guarded us from the top, the hardest one. We both gave it an honest go, but the sun was too high already and it was too hot. The rock was slippery under our shoes, and on this pitch at least, friction is everything. We both took clean 30-footers and realized that our only hope was to wait until evening when temps would drop. 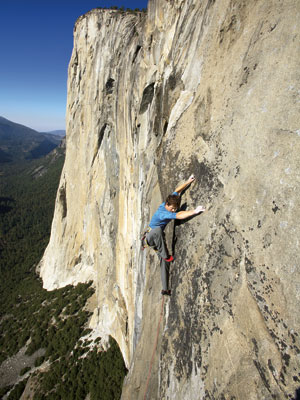 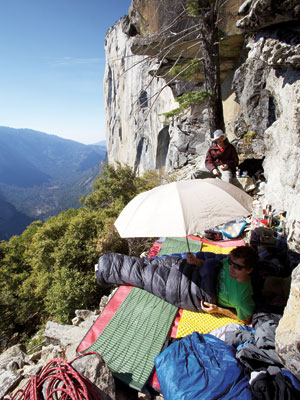 After a nap, I roped up around 5 p.m. A bit of anxiety pulsed through me during the opening moves, but I ignored it and raced through the lower half to a rest. My shoes were sticking better and I felt strong and calm. I recall looking around at the scenery around me. It was all so beautiful and exciting. I knew I was in a special time and place.  I flashed a smile thinking that no matter what happens, this what I had come here for.  With a deep breath, I grabbed the next hold and pushed on, gunning for the arête some 20 crux moves away. Climbing too fast to be scared I snatched the exposed lip with my left hand and a tiny crimp with my right. I clipped some gear and cautiously left the crack behind while moving into the brutal corner. Pumped and shaky, I kept going. I wasn’t far from a solid jam – if only I could reach it. I inched into a steep and bouldery traverse with no gear and took each hold with maximum force, over-gripping with every digit. I had nothing to lose. Controlling nerves and heavy arms, I dug deeply to extend myself to the next tiny finger lock, when everything inside felt like sagging and giving way to the beckoning space below. From tip to toe I pushed for that jam. When I got it, my hand sunk in as though I molded the crack myself. I clipped another piece of gear and pulled three more moves to a massive block and instant release. Something, perhaps another version of me, trapped inside myself, leapt from my lungs, escaped and flew away into the Sierra’s. I hung there for a minute feeling lighter, weightless and euphoric. 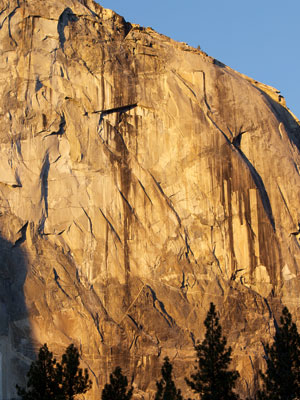 Will started up as the sun went down. The wind calmed and although I couldn’t see him yet, I could hear his breathing. After a few minutes, I leaned back to see him at the rest before the crux. He stayed for a while and then embarked. I pulled up the slack carefully so as not to jolt him. Moving fluidly he climbed to his highpoint, then effortlessly past it. He looked stronger than ever. Suddenly, just below the fixed pins, his left foot skipped down the wall, my heart skipped a beat, he caught himself quickly and strained to bring it back up again. Forcing it to stick to the glassy smear, he set up and lunged for the next tiny crimp and missed. Slumping onto the rope, he had climbed brilliantly to a personal highpoint, but had nothing left. It was a spectacular failure.  After a brief rest, he pulled back on and climbed up to meet me. We sent the last three pitches (5.12, 5.13, 5.10) by headlamp and my mission ended. High on adrenaline, I didn’t sleep a wink.

But Will wasn’t finished. We rapped back down immediately and under blue skies the next day I belayed him on four more burns. With cracked, swollen knuckles, bloody fingertips and jacked elbows, he booted up and hit the stone once more.  Unfortunately, as hard as he tried, his desire could not overcome the fatigue in his body.  They say a hero is someone who gets up, even when they can’t. Six months ago he was laying broken in a hospital bed. Today, he’s on one of the wildest free routes on El Cap, beyond tired and giving it 110 per cent. That’s the attitude you need when the chips are down – a never-say-die determination. I was proud of him and inspired.

There’s a part of me that still feels like we did it and yet a part of me that knows we didn’t. I’m glad I dug deep and got lucky, but I wish we could have shared in the joy of doing it as a team. The silver lining is that Will’s going back, he’ll lead the pitches he didn’t do before and he’ll climb better than ever. And, he’ll bring a new partner along with him, showing them the beauty and magic of the climb. One day that climber will probably share it with someone else in a perpetual cycle of stoke. More and more people will climb bigger and harder things because that’s how it works. 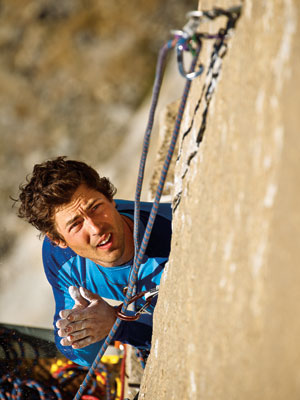 Leo has made me want to be better.  Not just stronger.  He climbs well, almost perfectly and without fear. Will inspires me to be tougher and to dream bigger. If it wasn’t for either of them, I wouldn’t be writing this. There’d be nothing to say. I wanted to go to Yosemite to climb rocks, but nothing in particular – it was Stanhope who threw it on the table for me, back in Squamish with that stunning picture of Houlding. For me, it was hook, line, and sinker. The more we invested in the route, the more it meant to me.  Then we got our window and somehow, somewhere I got lucky enough to stick that last final sequence. Being out on that terrifying arête in the golden evening light was one of the greatest and most satisfying feelings of my climbing life. I owe it to both of them.  We’re nothing without our hero’s.

Sonnie Trotter is one of Canada’s top rock climbers.